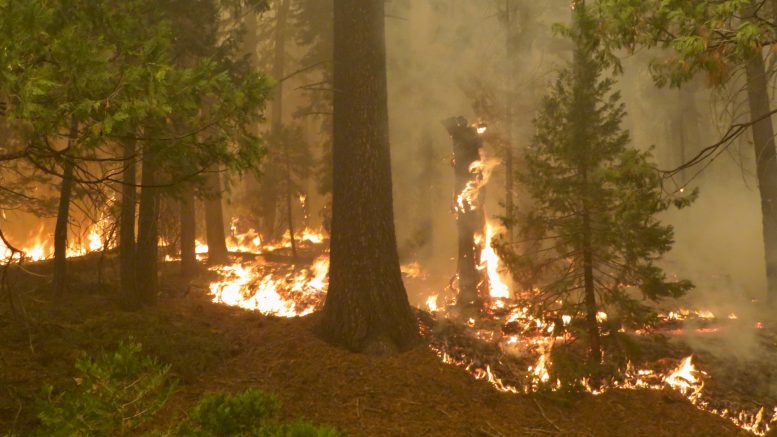 Fire spreads along the north side of Highway 50 as the wind picks up. Photograph by Ken Magri

There is a hot war going on in the Sierras.

More than 2,800 fire fighters are battling the Caldor Fire that started near Grizzly Flats on August 14th and has already burned over 150,000 acres to date. One of the most intense sections of the fire is on its northeast side, where the direction of growth mimics US Highway 50’s path from Sacramento to South Lake Tahoe.

On August 20th, Cal Trans closed this crucial roadway between Pollock Pines and Meyers to all traffic except emergency vehicles.

Besides its historical importance as a corridor through the Sierras for the 1960s Pony Express mail service, this 40-mile stretch of Highway 50 is also the largest section of road involved in the Caldor Fire.

“We know this fire has done things that nobody could have predicted,” said Jeff Marsolais, supervisor for the El Dorado National Forest, at an August 18th announcement to shut all national forests in the area. Marsolais, who has spent 11 years living in the Lake Tahoe basin, compared the Caldor Fire to the new normal that characterizes this year’s Northern California wildfires. “Every time a fire broke out it outpaced our models two-to-one,” he said. “We’re seeing the same again here.”

Wide enough to serve as a passive fire break, Highway 50 is also the main route for fire trucks and support vehicles that must approach from the west.

What is being done to protect homes, cabins business structures and communication and power lines? With the large amount of personnel, equipment and logistical operations assigned to this fire, Highway 50 resembles a battlefield in a war against legions of flames.

The tactic of pre-positioning

In order to save this stretch, trucks, hoses and personnel are pre-positioned in areas where fire is likely. This is the key to the Cal Fire strategy. It begins in downtown Placerville, where pumper trucks brought up from the El Segundo and Torrance Fire Departments sit in a public parking lot, waiting for assignment.

More pumpers from California cities, along with Bureau of Land Management (BLM) trucks and US Forest Service (USFS) fire engines, are parked at intervals, dotting the highway in critical areas heading east. They are joined by water trucks, communications and utilities trucks, and bulldozers on trailers waiting to be utilized.

Preparing structures for an advancing fire

In order to save structures, different strategies are employed at the same time. The first tactic is to prevent fire altogether, and the second is to minimize a fire’s damage should a “burn-through” event happen.

Fire fighters remove all nearby fuels like wood piles, brush, pine needles on rooftops and ornamental plants that may be touching a structure. In flat and open spaces, bulldozers clear the ground to create a defensible 30 foot ring around a structure, extending out to 100 feet if possible.

Private water trucks from the area have been contracted by Cal Fire. These water trucks are parked at the turn-offs to cabins and homes that parallel Highway 50.

Miles of fire hoses are laid out in advance, ready to be hooked up to the waiting water trucks. US Forest Service workers patrol the highway, checking each cabin tract for changes in status.

In locations that vehicles cannot access, an elaborate system of portable sprinkler kits and pumps are pre-positioned. Red fire retardant may be sprayed on the ground, or at the bases of trees and utility poles. Silver sheeting is sometimes applied to the sides of structures. This sheeting acts as a preventative, especially in situations where a burn-through might only involve low, “drop and dead” ground fuels, which won’t reach up into the trees without high winds.

Backfires, or low-intensity controlled “burnings” are done in specific locations, when possible, to eliminate fuels that might approach a structure.

Smoke is the enemy of the air war

In fire-fighting, it is good when there is no wind. But the result is smoke so thick that it looks like Sacramento wintertime fog. The Air Quality Index (AQI), which uses a 0-500 scale to measure particulates in the air, indicates dangerous air at the 300 mark. Recent AQI measurements along Highway 50 and in the Lake Tahoe Basin have exceeded 500 for several consecutive days.

Besides being a health hazard, you cannot see through smoke, making it impossible for helicopters or fixed-wing aircraft to be effective with water drops. In these situations, the daytime fire-fighting along Highway 50 is handled by ground crews.

The problem with spot fires and containment lines

Spot fires are tiny fires that begin, both inside and outside the fire perimeter, by jumping the line. They are first ignited by burning embers that float in the air as far as a mile away, until settling on dry fuel.

Spot fires inside Caldor’s perimeter were present at numerous places along the north side of Highway 50, between Riverton and Strawberry. But these were not the giant 100-foot high shooting flames that TV news helicopters filmed in the early days. Here, it was possible to walk right up and get close-up photographs of a line of flames 14 inches high.

The pavement itself on Highway 50 is in fine condition, Still, it seemed odd to watch a fire truck drive right past one of these roadside outbreaks. But the winds were very passive on this morning, as the fire slithered along at a snail’s pace.

The larger strategy is let the spot fires north of US 50 to continue to burn, until they reach a new containment line further up the road. “We’re just letting that go,” said Captain Terrell Norwood, whose crew from the San Bernardino Forest Service is assigned to protect cabins.

“They are trying to find an area [near Strawberry] to get some dozer lines down, and try to fire this off,” said Norwood, referring to backfires that will complete the containment procedure.

Rescues units and other support for fire fighters

If a fire fighter or a wild animal is injured, a Rapid Extrication Module Support unit (REMS) from San Diego County is also pre-positioned along Highway 50. This mobile ground rescue team of four is specially equipped to safely extract an injured fire fighter from rugged terrain when helicopters cannot get in.

A line of portable toilets and wash stations are set up at Silverfork and Strawberry, and “Thank-You Fire fighters!”signs have popped up from Kyburz to Placerville.

Otherwise, these men and women from different government agencies are self-contained and well-prepared. They see all of the people’s gestures, and are motivated by the knowledge that a single structure has yet to be lost along Highway 50.

Cal Fire cannot predict when the highway will reopen, but the effort being made to make that happen is nothing short of monumental.

As Chris, an evacuated woman from Pollock Pines put it, the Caldor “fire fighters are the guardians of the highway.”

In El Dorado County, the Caldor Fire rains ash on homes like snow