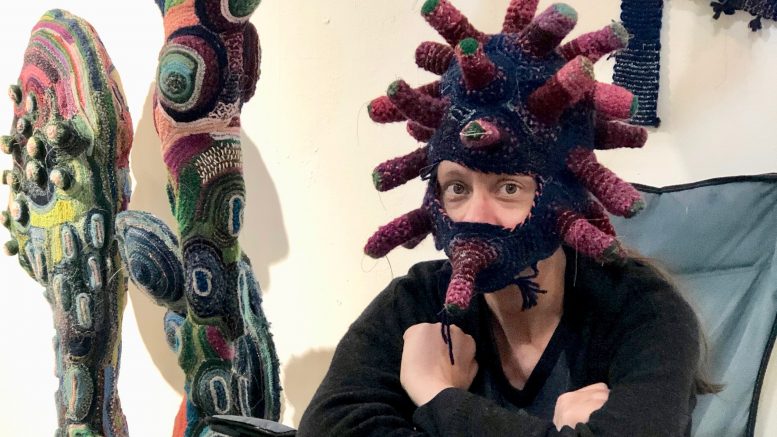 Sacramento's Mercy Hawkins will soon start a residency at Headlands Center for the Arts. Photograph by Gretchen LeMaistre

Surrounded by white walls, an armless fiber sculpture stood tall – resembling a patchwork lollipop from another dimension. Its bulbous head and slender waist showed tight spirals of colorful fabric, all stitched and wound into a skin of universes and galaxies of blue, grey, pink, green and red.

The sculpture, named “Peace Piece For Will,” was created in 2019 by Sacramento artist Mercy Hawkins. Today, Hawkins remembers with a laugh how frequently she changed the name while constructing the 6-foot work or art. The title’s inspiration came from a connection that she finds between poetry, music and art.

“I think Charles Mingus also did that,” Hawkins reflected. “He changed the titles every time there was a release of his compositions. ‘Peace Piece’ by Bill Evans is a must-listen work of art. If you’re feeling nervous, listen to that and you’ll melt. I used to call it ‘For A Will,’ but I changed it to ‘For Will.’ Will [Alexander] is one of my favorite poets. I was also playing with the idea of ‘Where there’s a will, there’s a way.’”

Hawkins, who graduated in June from U.C. Davis with a master’s in Fine Arts, has been selected to do a residency at Headlands Center for the Arts. This fall, Hawkins will travel to Sausalito to begin her year-long journey at the center.

“The Headlands are close to the Golden Gate,” she noted. “There’ll be some open houses and a few shows there. The center is quite prestigious. This is huge. I was also accepted to New American Paintings.”

New American Paintings is an art exhibition publication. It will feature Hawkins’ work as part of its MFA annual showcase in its Nov. 2021 issue.

UC Davis MFA students are typically expected to display their thesis work on campus at the Manetti Shrem Museum of Art. According to Hawkins, campus closures due to the COVID-19 pandemic made such an exhibition an impossibility for the eight people in her cohort, though their work is now on display on the museum’s website through Sept. 6.

“We knew that we weren’t going to be able to get our thesis show in person,” she said. “That was pretty clear. We didn’t even get a first-year show in person. We were sort of left out to dry because of the pandemic, as far as being able to show my work.”

Hawkins didn’t give up on searching for a gallery. With the assistance of Chris Daubert, a former instructor and enthusiastic supporter of Sacramento art, the group eventually filled two galleries Midtown Sacramento with their pieces. That show took place on March 14.

“We were able to get both The Be Cool Club and the B. Sakata Gallery,” Hawkins explained. “We were able to spread out and show the work. The cohort was very thankful and happy that we could work together.”

Daubert, who retired from Sacramento City College, said that he and Hawkins reconnected after bumping into each other at a gallery. He described Hawkins as obsessive, organized and creative, adding that she’s highly regarded by her peers.

“Mercy has the kind of personality—I kind of felt like I was working for her,” Daubert admitted. “She knew what she wanted to learn and used the excuse of the assignments to do her own work. To see her sitting on the floor—stitching and doing work on her sculptures—you can tell that there’s nothing that’s going to intrude on her mental process.”

After learning that there wouldn’t be a show at U.C. Davis, Daubert said, “Let’s see what we can do.”

“The place had pretty much just shut down,” Daubert remembered. “The show was in the middle of the pandemic and everything was such a mess, but [Sakata] was very interested in showing artists.”

Hawkins’ first class with Daubert, who also ran the Gregory Kondos Gallery at City College for 15 years, was in 2000. She continued to take classes from him over a span of 15 years as she chipped away at her associate degree. Hawkins used the interlude to decide if a career in art was the right decision.

“It’s kind of a risk because it’s not an explicit career path: Plus, it’s very competitive,” Hawkins said. “I changed my major like four times, and I was also working, so I could only take about three-to-six units at a time. Chris is incredibly dedicated to the art community in Sacramento and to the students. I really saw the care he gave so many students, and his unique way of teaching. That’s what you want in an art educator; you want a unique vision.”

Another local artist, Fred Dalkey, also taught Hawkins at Sacramento City College. Dalkey and his wife Victoria frequent Coffee Works, the cafe where Hawkins was employed while she was a student. The three became familiar after regularly seeing each other by the espresso bar. Dalkey says he’s impressed the work he’s seen from Hawkins.

“She was an interesting person to begin with—very serious, and not at all trivia—very bright,” Dalkey stressed. “It’s interesting because of the kinds of classes that I taught. It’s so far removed from that, but she’s developed far away from the academic influence that I had on her at City College. It’s exciting; this is how it should be.”

Hawkins believes that the way an artist forms a work is tied to its presentation. Some of her sculptures are made by painting and cutting yupo paper (a “treeless” plastic medium), then sewing those pieces together to form the final shape.

“It’s like making painting-Legos,” she said. ”It gets into this fashion thing, where I’m building a pattern. When you put two different shapes together, they come together to make a strange [new shape]. It’s an incredible amount of work because it’s all done by hand. I do a lot of dashing, mark-making and the repetitiveness of the stitch is sort of a chanting—a repetition that builds energy. I want it to be this magical haunting of the artist’s hand when the viewer sees it.”

Hawkins’ often uses similar colors in her fiber sculptures and other work. She says these choices are a design tool to create an eye-catching palette that pops for the observer: “The vibrations of those colors really speak to me. The complimentary colors—these various pinks and they bounce off of the greens and blues. They’re formal choices, trying to portray a kind of music.”

Be the first to comment on "Just Mercy: Even as the pandemic roiled Sacramento’s art scene, Mercy Hawkins pushed her sculptures to the next level"