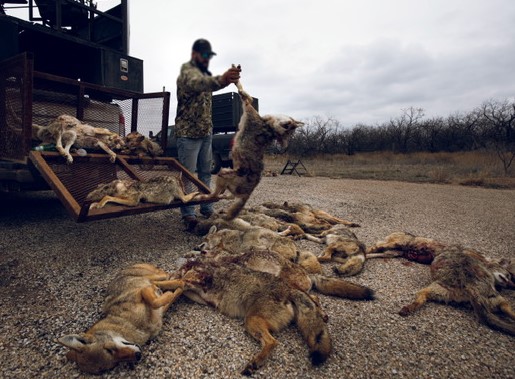 Nevada wildlife officials are considering a ban on coyote-killing contests, which have been outlawed in several other states.

In question is whether the competitions are acceptable wildlife conservation measures or brutal examples of cruelty to animals. Emotions run high on both sides of the issue.

The rules of a coyote-killing contest are simple: kill as many of the animals as possible in a set period of time to win prizes, awards or money. Coyotes are considered “varmints” in Nevada and many other states and can be killed on sight in any season. They have no rights.

“It’s like we hire an exterminator to kill household pests, spiders and things, you get a rancher who says ‘I’ll put up $500. Would you get a bunch of guys together to hunt these coyotes?’ asked Mike Reese, a member of the Clark County Advisory Board to Manage Wildlife, a hunter of coyotes and an advocate for the contests.

“Coyotes are predators, they attack cows, sheep, everything,” Reese, said.  ”As sportsmen why can’t we do some of the work ourselves rather than paying government agencies to manage coyote numbers?”

Some scientists say much of the wrath directed against the predators is unwarranted.  Animal rights activists and many other Nevadans oppose the contests as acts of cruelty against animals that are a natural part of the ecosystem.

“We are all interconnected,” said Norm Cavanaugh, a member of the Western Band of the Shoshone Tribe in Nevada and a hunter. “When elders pray, they pray for all our relations as the deer, the coyote, all living beings on mother earth because we are all interconnected. So in that sense the coyote is considered a relation of the native people… No animals are killed just for sport, the elders said.”

The debate about the contests magnifies a clash of cultures, beliefs and history. It is an argument about values and tradition. In the middle are the coyotes — and the Nevada Board of Wildlife Commissioners.

At its meeting on June 25 in Winnemucca, the wildlife commissioners continued hearing testimony about whether to ban the coyote-killing contests. The issue is whether the long-running competitions, which combine social events with the killing of the animals, is proper in today’s environment

At that meeting, representatives from three County Advisory Boards to Manage Wildlife spoke against ending the events.  A few hunters and others also testified in opposition to a ban. Several individuals and representatives of environmental and animal rights groups, including the Toiyabe Chapter of the Sierra Club, the Humane Society of the United States and Animal Wellness Action, spoke in favor of outlawing the contests.

“This is a core values issue, it is not a science based issue,” said Tony Wasley, director of the Nevada Department of Wildlife. “A coyote has not killed a human being in Nevada in over 100 years.”

Advocates of the contests say they believe exterminating the predators protects domestic and game animals and continuing the events preserves what have become a traditional social event in rural areas. Some even argue the contests are akin to doing the coyotes a favor.

“No one is crueler than mother nature,” said Reese, who also is a lobbyist for hunters. “When these animals get older their teeth are rotten and they can’t feed themselves and they die a terrible death.”

Participants call the events “coyote-calling contests,” leaving the word “killing” out of the title. The hunters mimic adult and puppy coyote calls in order the draw the animals closer to their gun sights. Reese said killing the predators protects the species that they prey upon.

“We are there to protect the newborn fawn from coyotes,” he said, an act which also helps deer hunters, who will then have more targets in the coming seasons. The state’s deer population has steadily decreased in recent years, a trend Reese blames on the canine predators.

Dr. Don Molde, a retired psychiatrist and Nevada wildlife activist, said the mass killing of coyotes increases, rather than reduces, their populations in a given area. He said that current science regarding coyote population dynamics clearly shows that when coyote pack structure is disrupted by random killing, coyotes respond by increased pregnancy rates among sub-adult females and increased litter size and survivability of pups.

“In Nevada, about 10,000 coyotes are killed every year from all combined sources of mortality,” yet their numbers remain high, he noted.

“Over the past 20 years, (the Department of Wildlife) and the wildlife commission have spent close to $5 million to kill coyotes and (more than 200) mountain lions for the purpose of increasing deer numbers in Nevada,” he said. “During that time, mule deer numbers have declined by 50,000 animals statewide.”

Molde said the coyote killings are aimed at reducing competition for game animals.

“Sportsmen dislike the competition that coyotes and mountain lions represent in pursuing deer,” he said. “Sportsmen prefer to kill deer and begrudge coyotes and lions from eating their natural diet. Coyotes are also not appreciated for their important role in cleaning up our environment… nature’s janitors if you will.”

When it’s time to set policy, the animals aren’t facing a level playing field, according to Molde.

“What is driving me is (that) the unnecessary killing shows disrespect for the animal,” he said. “The wildlife commission is stacked in favor of hunters although only about 4% of Nevadans hunt. The commission has seven hunters amongst its nine members.”

Cavanaugh, who was raised on the Duck Valley Indian Reservation on the Nevada-Idaho border, said that in his youth he hunted coyotes and sold their pelts. He still hunts elk and deer, but leaves the predators alone.

He hadn’t heard about the coyote contests before a reporter asked him about them. He then researched the issue and was appalled at what he found.

Coyotes, Cavanaugh said, are “spirit animals” in his native culture. His grandmother told him stories about the animals, including the tradition that someone who has died may return in the form of a coyote that will vanish when it’s about to be caught. In tribal lore, coyotes don’t like playing second fiddles to their more powerful wolf brethren and get attention by playing tricks on humans.

In nature, the animals are essential components of the ecosystem, he noted. “(They) kill mice, and mice carry hanta virus,” Cavanaugh said. “We just saw what viruses could do in the COVID pandemic.”

Feared in the cities

Urban residents also have complaints about coyotes, which are frequently seen all around Reno, but particularly along greenways, along nature trails and the parts of the Truckee Meadows that border undeveloped desert land. The animals also may prey on cats and small dogs.

Dr. Carrie Lambert, a Reno veterinarian, said owners of domestic animals must take responsibility for their animals’ safety in any area where natural dangers like coyotes and rattlesnakes exist.

“They are not going away,” she said. Lambert agreed with Molde that the competitive killing of coyotes has increased the coyote population in Nevada. The females breed twice as often to make up for any decrease in population, she said. Pet owners need to be educated about how their animals can coexist with Nevada’s wildlife.

Learning to live with predators

Jessica Wolf, spokeswoman for the Nevada Department of Wildlife, said although the coyote is an unprotected species, she leads education sessions for homeowners’ associations and other organizations aimed at teaching people to learn to live with coyotes in urban settings.

“It is a better long term solution for everyone,” Wolf said. She recommended that people who want to learn more about Nevada’s coyotes visit the department’s YouTube channel, which hosts videos about keeping pets safe from predators.

The control of rabies often is cited as a rationale for allowing coyote-killing contests, but Ciara Ressel, spokeswoman for the Nevada Department of Agriculture, said no coyotes have tested positive for rabies this year. Data from the Centers for Disease Control and Prevention, the U.S. Department of Agriculture and state governments show that rabies cases among coyotes are very rare. Coyotes rank at the very bottom of the statistical list of rabies cases, near rabbits and beavers and behind cattle and deer.

California outlawed coyote-killing contests in 2014. Since then, Arizona, Colorado, Massachusetts, New Mexico and Vermont have passed bans on killing contests for coyotes, foxes, bobcats and other species. Washington state and Oregon also are considering banning the contests.

In 2015, Nevada’s wildlife commission considered a public petition to end the contests but dismissed the petition as incomplete. A more specific petition resurfaced later that year, but failed to pass. The following year, some of the commissioners wrote a draft policy, but it wasn’t a binding regulation. In 2019, a bill to ban the contests made it to a state senate committee, but died there.

The commission is expected to vote on the proposal to ban wildlife killing contests, possibly later this summer.