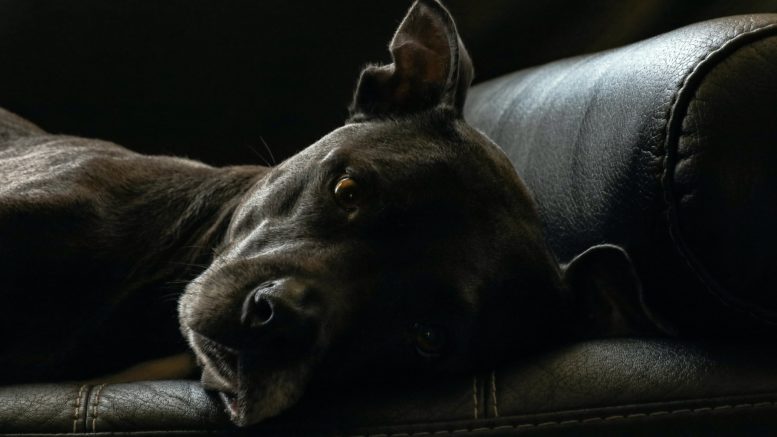 A pit bull in shadow. Photograph by Dustin Humes.

The liberation of 29 dogs reportedly destined to be mauled – or fought to the death – for the amusement of an underground subculture was the result of one covert agent following leads to a property in west El Dorado County.

Now, 38-year-old Carlos Villasenor is facing up to five years in federal prison for his alleged role in a cross-state cruelty phenomenon.

The investigation into Villasenor gained stream in May, when Special Agent Anitra Mackie of the U.S. Department of Agriculture zeroed-in on his possible involvement in the illegal world of dog-fighting.

Pitting dogs against each other is a felony offense in all 50 states, though a coterie of practitioners continue to carry out the crime via secret tournaments. According to charging documents in Villasenor’s case, this blood sport usually involves pit bulls or “bull-type” cross-breeds. Betting money on winners and losers is also part of the draw, and the conditions the dogs are typically kept in are nothing less than appalling.

Authorities have learned to detect dog-fighters partly by understanding coded language that’s used in chat forums and dark corners of the internet. Some of these terms, like “champion” or “grand champion,” can refer to how many battles a dog has survived, while others, like “calling out weight,” are used to discretely set-up matches according to a dog’s size and sex.

Mackie’s report describes what usually happens once a fight is scheduled.

“The dog then typically undergoes a conditioning process,” she wrote. “Dog handlers often refer to this conditioning process as putting the dog ‘in keep.’ This ‘keep’ may involve treadmills to run and exercise the dogs away from public view; weight pulls to increase the dog’s strength and stamina; and ‘spring poles’ and ‘flirt poles’ to build jaw strength and increase aggression.”

She added, “Animal pelts’ are also common for dog fighters to use to excite and bait dogs during dog fighting training sessions.”

Mackie contacted Villasenor in mid-spring under the guise of being interested in purchasing one of the dogs he had. Villasenor allegedly created on online pedigree for these pit bulls he was selling, which mentioned one of them being “the best Eli Gator to be had.” Authorities say “Eli Gator” is a term that signals a dogfighting bloodline, and it often marks the most highly sought-after animals within these criminal rings.

Initially, Mackie sent the suspect two money orders totaling $1,500 in order to buy a one-year-old pit bull. The agent and another undercover officer arrived at Villasenor’s house in the city of Placerville on May 17. After chatting with him, the undercover agents left with a 46-pound canine. They headed straight for El Dorado County Animal Services.

A veterinarian examined this first dog and allegedly found it was wearing a thick collar that was far too tight, and that it had numerous types of infections. It also reportedly had “prepping” marks on its head, possibly from another animal biting it, as well as elevated levels of Creatine Kinase in its system.

“I know that dogs who have been fought, or who are being trained to fight, may show elevated Creatine Phosphokinase as a result of extreme exercise and stress,” Mackie put in her affidavit. “They may also be suffering from blood loss, dehydration and shock.”

This first four-legged victim to be rescued was given a medical bath and then administered a number of antibiotics.

Maintaining her cover, Mackie reached out to Villasenor on June 9 via the app Telegram, a hyper-private messaging service that was born out of state-sponsored privacy abuses in Russia, but which has also been exploited by terrorist networks and organized crime. The agent told Villasenor that she was interested in purchasing a puppy. Villasenor reportedly responded that he had a litter of puppies, including three males, though he was planning to keep two and sell the third to a “customer” who’d already contacted him.

On June 17, Mackie and a host of other law enforcement officers descended on Villasenor’s home with a warrant. They described what they found as a disheartening sight: Some 27 pit bulls were confined in different spots across the property, roughly half collard to heavy chains that were hooked to small huts or trees.

“The dogs were spaced so that they could see one another, but not reach one another,” Mackie noted in her affidavit, adding that agents also found a litter of nine puppies.

In additional to the cadre of pit bulls, authorities found a chihuahua crated on the property which may have been used as a bait dog – a target animal used to drill extreme dog aggression into a pit bull without risking injury to the financial investment.

Other belongings of Villasenor that were booked into evidence include testosterone boosting supplements for dogs, skin staplers, syringes and IV bags, animal pelts, break sticks for prying open dogs’ jaws, a hanging crane scale, and a rack used for forcing aggressive female canines to be bred. What’s described as suspicious ‘best of’ awards from events held in Mexicali, Mexico, in 2020 and 2021, were also noted in the report.

Villasenor will face his charges in the federal Eastern District Court of California. He was released from custody June 22 on a $50,000 bond.

Patricia Contreras, Special Agent in Charge at U.S. Department of Agriculture-Office of Inspector General, said she hoped the Placerville investigation would send a message that there is “zero-tolerance” for dog fighting.

This week, SN&R reached out to the El Dorado County department of animal services to inquire about the status of the 29 rescued dogs, asking what health procedures they’d undergone and whether they would be deemed adoptable after what they’d been through. An El Dorado County spokeswoman declined to answer any questions.