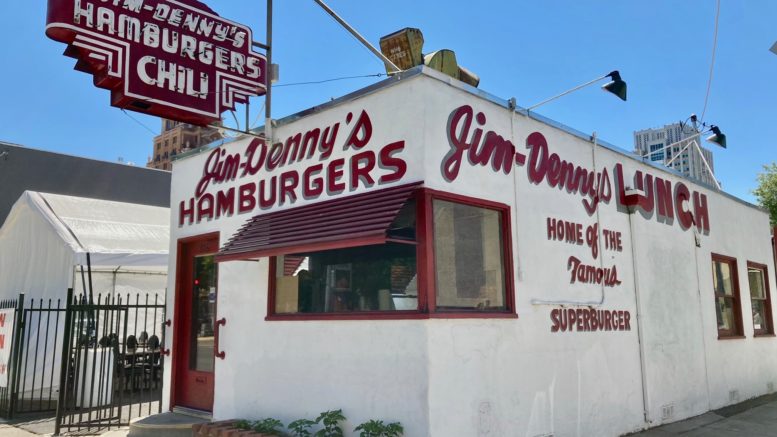 Fabled diner gets new energy from a local chef

Just in time for California’s post-Covid era, Jim Dennys restaurant is back in business, and serving some of the best tasting burgers in town.

Joe Pearcy, a chef who has worked in the local restaurant industry for years, reopened the famous 10-stool diner last Saturday with a simple menu of burgers, fries, sandwiches and frozen-fruit desserts. The well-known grill by the front corner window, that fried so many hash browns and scrambled eggs, is not yet operating. But Pearcy said it will be soon, as he eventually offers a larger menu  including soul food items.

“Joe has a two-year lease with a two-year option,” said Tom Naygrow, whose family owns the building at lot at 816 12th Street.

Everyone in Sacramento has at least driven by the location, even if they never went inside. The restaurant has been a downtown fixture since 1940, when it was opened as “Jim Dennys #2” by a lovable prankster named Jim Van Nort.

Van Nort and partner Dennis (Denny) McFall first opened the original Jim Dennys diner on 16th Street in 1934. Six years later, Jim added the 12th Street diner, which survived for 80 years until its most recent operator, Danielle McClure, had to give it up last year after her rent doubled.

Much of the Jim Dennys popularity in the early years sprang from the antics of Van Nort himself, whose unusual personality and sense of humor was witnessed several times by this writer.

Jim was a short-change artist who never actually kept the change, but simply enjoyed practicing the con.

Back in the 1960s, Jim put up a sign by the cash register that read “Free beer tomorrow” and another by the pay phone instructing customers to answer it and take food orders if the waitresses were busy. Those signs stayed up for decades.

If anyone asked for pie a-la-mode, Jim would hand them the pie on a plate and then toss the ice cream scoop in the air, yelling “think quick!”

During certain hours, Van Nort would let his favorite customers sit at a small counter back in the kitchen, which he named “the Sky Room” because its window looked out onto Terminal Way. But if plates started piling up in the sink, a waitress would toss the customers a towel while hurrying by and say, “How about helping with the dishes, hon?”

After hearing customers tell a few Van Nort stories at last Saturday’s re-opening, Pearcy said, “We’ll have to try some of that.”

The Art Deco building, with its red-on-white color scheme, has been designated as a historical landmark for Sacramento. But long-time Jim Dennys patrons who walk back inside will notice what’s missing.

The milk machine with its giant Elsie the cow decal is gone. So are the many framed newspaper articles, all yellowed from age, that retold the Jim Dennys story to new generations.

But the grimy wood paneling, the uncomfortable stools and worn-down countertop are all still there.

“Yeah, we can’t change anything,” said Pearcy, as he pointed to an outline of the famous pay phone (now gone) at the end of the counter. “We can’t touch these countertops, can’t touch the floor,” Pearcy said.

Who would want to? Most of the loyal Jim Dennys customers also came for the experience of a ten-stool diner and a classic slice of Americana. Even though Van Nort has been gone since the 1990s, that warm feeling of an earlier Sacramento, which is historic for some but highly nostalgic for others, still radiates from inside the walls of Jim Dennys.

8 Comments on "Downtown Sacramento’s iconic Jim Dennys is Back!"