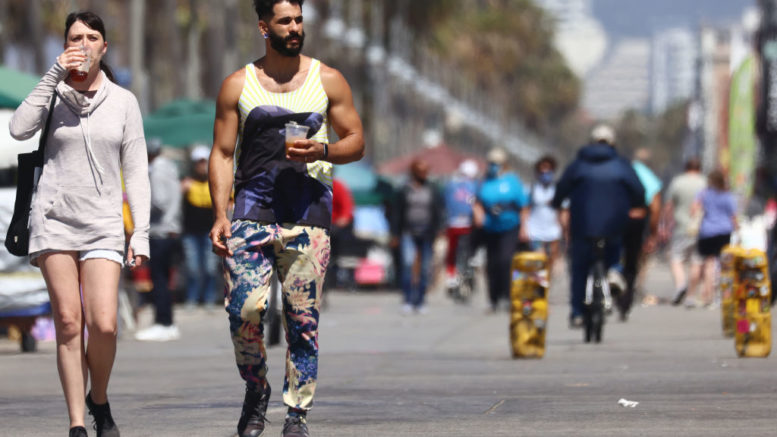 Pandemic restrictions are ending, whether we’re ready or not.

Yuba County, in Northern California’s Sacramento Valley, is an outlier. In a state where more than 66% of residents have received at least one dose of a COVID-19 vaccine, Yuba lags horribly, at just 33.8%. Only three of California’s 58 counties have remained in the so-called red tier, indicating “substantial” transmission of the virus and requiring significant restrictions on how businesses may operate, with some closed altogether. Yuba is one of the three.

On Tuesday, June 15, though, those distinctions became meaningless — at least in terms of how California conducts official policy. That date was earmarked more than two months ago by Gov. Gavin Newsom for the reopening of the state, and its arrival signals the end of state-mandated mask rules, forced business closures, bans on public gatherings and the like — including, of course, the multicolored tier system under which counties like Yuba have been constrained since last year.

Experts advise continued vigilance. Clinicians worry about a sudden and steep decline in interest when it comes to patients getting vaccinated and taking everyday precautions. But per Newsom, the chains are coming off the state — whether we’re ready or not.

On paper, the reopening is occurring under promising conditions. California’s COVID infection rate has decreased to a 14-month low, and as of June 14 the state’s seven-day average death rate per 100,000 people was a microscopic 0.04. “It’s been a long road, but our future is BRIGHT,” Newsom tweeted on Sunday.

But twice before, the state has experienced the dark consequences of reopening too soon and under either confusing or contradictory advice. It happened in May of 2020 and again in the late fall and early winter, a miscalculation that led to California’s highest monthly COVID death total.

Even amid Tuesday’s reopening and the solid recent health markers, there are a maze of local and private business regulations that must be navigated. (Yes, you can still be told that without a mask, you may not enter certain stores or restaurants.)

Meanwhile, here are a few things to keep an eye on as California allows the broad resumption of everyday public and business activity:

The most vulnerable are still at greatest risk. The state uses a quartile system to place each of its ZIP codes into one of four groups, from those with the unhealthiest community conditions to those with the healthiest. The chart relies upon information from the California Healthy Places Index, a fuller explanation of which can be found here.

Using that data, state researchers have found that more than 45% of those living in the bottom quartile — that is, the areas with the unhealthiest conditions — have not yet received even a single dose of a COVID vaccine. In the next quartile up, the figure is still an alarming 37.6%. (In the healthiest quartile, only 20.7% of residents are unvaccinated.)

For months, community leaders and clinic workers in hard-hit communities of color and lower income neighborhoods have pleaded with the state to help them achieve more effective vaccination outreach. Now, as one told us last week, “We wonder if we’re about to get left behind by the reopening.”

This issue is also reflected in the percentage of vaccines that have been administered across California. So far, the healthiest quartile of ZIP codes has received nearly 30% of all doses administered. For the bottom quartile of communities, that share plummets to 21.4%.

You’re about to go on the honor system. For the most part, if you’ve been vaccinated, you’re free to roam maskless in public spaces, including stores and restaurants, subject to local control. If you haven’t been vaxxed, you are required to wear a mask. But who’s keeping score, and how?

From Cal/OSHA’s confusing mask guidance for businesses to Newsom’s attempt to promote a verification system without using the phrase “vaccine passport,” this is a massive gray area for a state intent on reopening. In general, businesses appear to have the option to do any of the following: require masks of everybody; attempt to verify who has been vaccinated; or rely upon people to tell the truth one way or another.

Many business owners with whom we’ve spoken are reluctant, after such a brutal year, to impose anything beyond the bare minimum requirement on potential customers. You may still want to carry a mask, though. It’s up to individual stores and restaurants to decide what they want to do and how strict to be about it — but either way, you’re unlikely to have any assured proof that the people next to you are actually vaccinated, even if they’re maskless.

A statewide COVID emergency order still exists. As Newsom made clear earlier this month, lifting many of the state’s COVID health restrictions is not the same as removing all orders. The emergency order that remains in place conveys upon the governor a broad power to make state law for as long as the proclamation remains effective.

Newsom has used the emergency order to establish a mask mandate and the automatic mailing of ballots to registered voters for last November’s election. Several other directives — loosening regulations so that more people can administer vaccines, banning water shut-offs, etc. — will be gradually wound down rather than cut off abruptly.

Democrats control both the state Senate and Assembly, so it’s unlikely that either body will move to end the order until Newsom is ready to do so.

COVID has not been beaten. Many medical experts now believe that the herd immunity threshold would require 80% or more of California’s residents to be immune to the disease. That may be achieved via prior infection, but it’s most common through mass vaccination.

The state has not yet reached those levels. And considering its diversity, an established anti-vax minority and the ongoing failures of state and local bodies to reach many vulnerable populations, it’s not clear when — or if — that goal will be achieved.

In addition, more than 50% of Black and Latino residents have not been vaccinated, according to state data. Workers from those groups fill many of the “essential” jobs that did not shut down over the past year. And more recent mutations of the disease, such as the Delta variant that originated in India, may drive a spike in cases as people begin to congregate in numbers unseen since the pandemic hit California last February.

Put it all together and the state’s color-coded tier system concluded Tuesday with 34 of its 58 counties — 58.6% of the total — still designated as having moderate or worse rates of COVID transmission. “The June 15 (reopening) date creates a problem for us in a sense,” Yuba County spokesman Russ

Brown said last month, “because whenever people hear, ‘Oh, we’re going to open up on June 15,’ they really stopped looking at it as a concern.”

Prior to this week, that concern was more easily represented: The county was in the red tier. Such a designation meant placing cautionary restrictions on what was allowed in businesses and at public gatherings in those counties. But those days are over — even if this once-a-century health crisis is not.

TOPICS:End of COVID restrictions in California

Be the first to comment on "What will California look like now that the masks are coming off?"