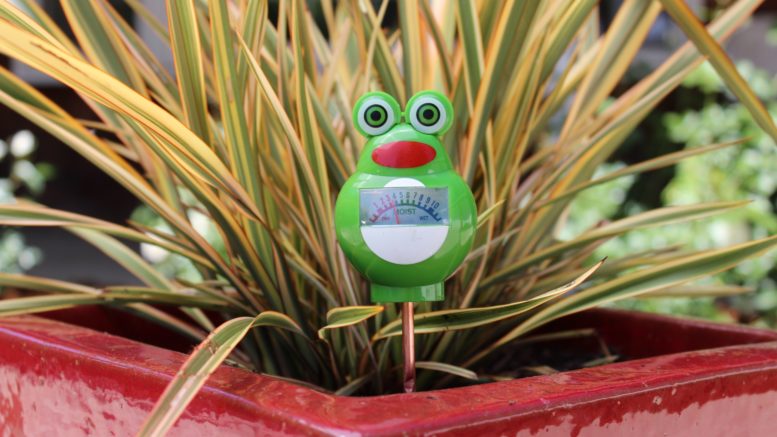 Use a moisture meter to check the soil to make sure plants get enough water - especially plants in containers. Photo courtesy of Regional Water Authority

This month will be a trial by heat for many Sacramento transplants. That goes for tomato seedlings as well as newcomers.

So far, Sacramento has managed to stay under the 100-degree mark in 2021. But with the coming weeks we’re going to see some scorchers. Never mind that we’ve been comfortably in the low 80s, even 70s. High temperatures on Sunday and Monday will be 20 degrees hotter than a week ago.

According to the National Weather Service, an excessive heat warning will be in effect from noon Sunday through Tuesday evening for most of the Sacramento Valley and foothills. Afternoon highs could reach 108 degrees on Memorial Day.

This may be the first time many Sacramentans have had to deal with gardening in triple-digit conditions. According to the National Gardening Association, one in four Americans planted their first vegetable garden during the pandemic. That trend has continued in 2021.

* Deep water shrubs, trees, perennials and vegetables. Give your tomatoes a good soaking.

* Keep soil evenly hydrated; not too wet or completely dried out. Use a moisture meter, long screwdriver or trowel to check. Even moisture is crucial for maturing tomatoes to prevent blossom-end rot.

* Don’t fertilize during a heat wave. It can stress already thirsty plants.

* Watch for sunburn on leaves. Erect temporary shade if needed.

* Sunburn also can damage bark, especially on young trees or shrubs, opening up the plant to wood-boring pests and premature death. It tends to be worse on the west- and south-facing sides of plants.

* Harvest lettuce, cabbage, broccoli and other cool season vegetables. This heat will cause them to bolt – send out flower shoots and go quickly to seed. Higher temperatures also tends to make greens bitter.

* Harvest artichokes before the flowers open. (The heat will open them quickly.) Those little artichokes on side shoots won’t get bigger; they’re ready, just smaller.

* Shade peas, spinach and other cool season crops that aren’t ready to harvest. Erect temporary shade structures to ward off some of that blistering afternoon sun. That will buy those veggies a few more weeks of production.

* Already have baby tomatoes or peppers? Shade those plants in the hot afternoon, too, to protect from sunburn.

* Keep an eye on new plantings and seedlings. Make sure they stay hydrated. Check soil moisture and water in the early morning or evening.

These won’t be our last triple-digit days. Let your veggie garden stay cool with these tips:

* Create some needed summer shade for veggies – plant sunflowers. These fast-growing (and tall) plants can shade neighbors who appreciate an afternoon break from direct sun such as peppers or eggplant.

* Let the vines keep the soil cooler. Plant watermelons, pumpkins, sweet potatoes, cucumbers, squash and other vining crops. Their vines will cover the soil, keeping it cooler and blocking out weeds. To be doubly effective, mulch around the plants before the vines cover everything.

TOPICS:Sacramento gardening in the summer