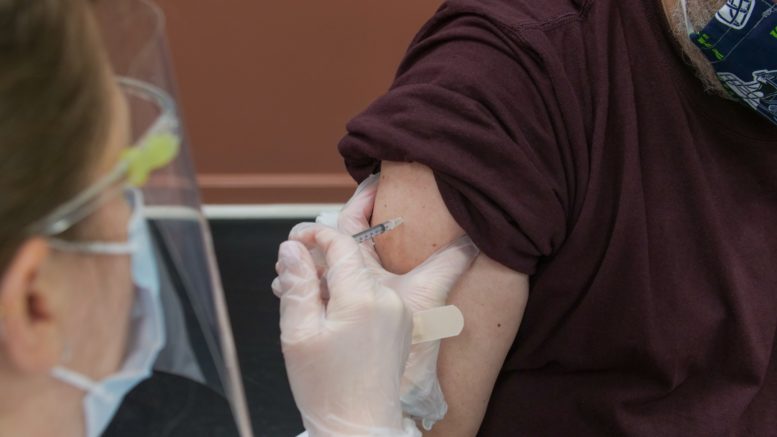 Four-year universities are mandating vaccinations, but community college and public schools don’t see that as an option

On May 12, the Centers for Disease Control and Prevention approved Pfizer and BioNTech’s Covid-19 vaccine for children 12 to 15. Just three days later, hundreds of teens and their parents funneled through the inflatable nighthawk arches at the front of Natomas High School to get their shot.

The school district estimated that anywhere between 1,500 and 2,000 newly eligible kids were getting their vaccine May 15 alone.

As vaccines become available to younger children, and with the California State University system requiring them for on-campus education, conversations about the possibility of mandatory vaccinations are at the forefront at local school districts.

Natomas Unified’s director of communications, Deidra Powell, said that although the district encourages vaccinations, it will not require them for their 12-K schools.

That’s a decision each district will now have to make for itself says Tim Herrera, Director of Communications for the Sacramento County Office of Education.

“I know the Education Code requires school district employees to be tested for tuberculosis, but that’s in the law, and I’m not aware of anything vaccination-related being in the law,” Herrera noted regarding the lack of a countywide policy.

According to California Education Code, government agencies prioritized 10 percent of the first doses for educators and child care providers, but the code explicitly clarifies that it “shall not be construed as inferring that vaccination of school staff or pupils is a prerequisite for providing in-person instruction.”

The San Juan Unified School District will not be requiring vaccinations for students or staff.

“Vaccination requirements for any vaccine are state level requirements,” said Trent Allen, senior director of communications. “While we do follow state law on vaccinations, we do not require any ourselves and that will remain true with the COVID-19 vaccine.”

Despite the state universities’ requirement, other local colleges are also not mandating vaccinations for on-campus learning. Sierra College’s website will not require vaccinations at this time, but is monitoring state guidance to determine if requirements will change. The Los Rios Community College District, which is estimating a full reopening by spring 2021, is following a similar trajectory.

“Unlike California’s four-year university systems, our colleges serve all students who come to us and we cannot simply replace unvaccinated students with vaccinated ones from a long waiting list,” explained American River College spokesman Scott Crow. “That said, we strongly encourage every Los Rios student and employee to get vaccinated as soon as possible.”

Despite not requiring it, most college and K-12 districts in the Sacramento area are still encouraging students to get vaccinations, and on a recent Saturday the community responded in the hundreds. Natomas High School has hosted a regular vaccination clinic since mid-February, and Powell said the district was readying itself for the CDC’s approval of teen vaccinations well before the May 12 announcement.

“Every time a new group becomes available to get priority, we add them into the pool,” she told SN&R. “We heard that they were going to be allowing 12 to 15-year-olds to get the vaccination, so we started preparing for it.”

Powell added the district announced the appointments to parents across schools, as well as on social media, which prompted people to start signing up immediately. Even California State Senator Richard Pan attended the clinic with his son, Powell said.

“He’s always been an advocate and proponent for immunizations,” Powell stressed.

Kids were giddy as they filed through the clinic with their parents. Most, like Westlake Charter School 7th grader Jacob Leota, were excited to get their vaccine.

Taylor Luther, an 8th grader from Heron School, got her first dose along with her father Kelvin Luther’s second.

“I was afraid it was going to hurt,” Luther said, adding that a lot of her friends were excited to get their vaccines and get back to normal.

Gustavo Salas, the father of two kids who got the vaccine that day, said he’s relieved that his children are now more protected from the virus.

“I know there’s a lot of concern about the vaccine’s safety, but I think if it’s safe enough for adults, and studies have shown that it’s relatively safe for kids, then I don’t see a reason why not to,” Salas said.

Thaima Ivery, a student at Inderkum High School, said she was not eager to receive the vaccine but she didn’t want the virus to interfere with her athletics.

“I didn’t want it to mess with my basketball experience,” Ivery acknowledged. “I’m just excited for everything to open back up and get back to normal I guess.”

Although not every kid was excited, Powell said many understood the vaccine’s impact. She thought it was refreshing to see young people so enthusiastic about their role in public health.

“I’ve never seen so many kids enjoy getting a shot,” she pointed out. “I mean the smile on their face. They understand the impact of the pandemic because they lived it and had their own. And so, they are game. They’re game to get it, get it over with and move on.”

Be the first to comment on "Kids and young people are hurrying to get vaccinated, but the Sacramento region remains a patchwork of strategies"