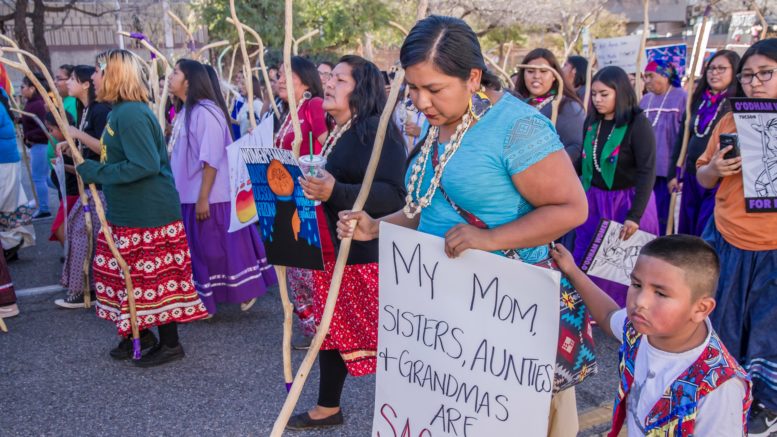 When Tessa McClean and other Native American women painted red hands over their mouths before they led the Women’s March in Denver in 2017, a powerful symbol was born.

“The red paint on our faces represents the erasure of indigenous women,” said McClean, an activist and member of the Anishinabee Nation of Canada. She said the gesture harkens back to her Indian ancestors who painted their faces red prior to a battle.

“Red is the color of war,” she said. “We know that the work that we do is confronting violence. We’re localized, educated and we’re not afraid to stand up for our people.”

McClean was among seven participants in a panel discussion, “Justice for our Sisters and Earth Mother,” on April 29 sponsored by the Progressive Leadership Alliance of Nevada and moderated by Autumn Harry. Panelists included members of Northern Nevada tribes and indigenous people from other parts of the U.S. and Canada. The discussion centered on raising awareness of the crisis of missing and murdered indigenous women.

Thousands of indigenous American women and girls have been murdered or have vanished over the last several decades, a plague of violence that, until recently, never made major headlines.

The statistics are horrific:

McClean noted that during the last two years the Canadian government conducted an inquiry into the problem and produced a 300-page report. “What do those 300 pages do to bring justice to our families?” she asked. Quantifying the crisis is important, she said, but hasn’t resulted in solutions to a problem that dates back to 1492.

Debra Harry, an associate professor of Gender, Race and Identity at the University of Nevada, Reno, said that the roots of violence against indigenous peoples, particularly indigenous women and girls,  are sunk deep in “the colonial notions of racial superiority and a dehumanized view of non-Christian, non-European people.”

Harry noted that mass media and Hollywood perpetuate that view by romanticizing tribal culture and sexualizing women characters in movies.

Those sources have “shaped the vast majority of American peoples’ understanding of indigenous people,” she said. Institutional and structural racism keeps “people marginalized and vulnerable and preyed upon, with little or no access to justice… The issues are many, but the solutions require all parties to work together, taking the lead from indigenous people for solutions that help to address this issue at the community level,” Harry said.

Panel members said a major obstacle to fighting the problem is the jigsaw puzzle of federal, state and local jurisdictions that surround Indian reservations. Cases often are underreported and when they are, tribal courts don’t have jurisdiction in cases involving non-Indians. Because more than 90 percent of  sexual assault cases involving indigenous women are committed by non-native assailants, the perpetrators often escape justice.

In last year’s Sovereign Bodies Institute report, families also described insufficient cultural awareness from law enforcement investigators, as well as “poor or nonexistent communication with families and survivors, chronic lack of cases being brought to justice and … past and ongoing violence perpetrated by officers.”

That report noted that the victims in nearly 75% of missing women cases were living within the foster care system when they vanished. The majority of cases in the U.S. remain unsolved, along with about 2,000 open cases in Canada, according to the study.

The researchers concluded that missing and murdered women also can be connected to human trafficking, the drug trade and what are being called “man camps.” Those are settlements of mostly male workers at mine projects, fossil-fuel fields and construction sites, often located in areas near Indian reservations.

Daranda Hinkeyan activist and member of the Fort McDermitt Paiute and Shoshone Tribe, has participated in the occupation of Thacker Pass in Northern Nevada, where a lithium mine is scheduled to begin operations later this year.She said that project is the gateway to more lithium mines across the Silver State, which will result in more sexual assaults and missing women.

The violence against women and girls, she said, is related to the violence the extractive industries commit against the Earth Mother. “The man camps at mining projects bring in alcohol and drugs, sex-trafficking and results in more missing persons,” Hinkey said.

Panel members noted that there are efforts to solve the jurisdictional and other systemic problems and to get a handle on cases that in the past were swept under the rug.

Gregg Deal, a member of the Pyramid Lake Paiute Tribe, at work on his mural, entitled “Take Back the Power” in Colorado Springs, Colo. Deal’s daughter, Sage, 14, was the model for the portrait. She is depicted with a red handprint painted on the lower half of her face, a reference to the national #MMIWG2S campaign bringing awareness to the high rate at which Indigenous women, girls and Two-Spirit (LGBTQ) individuals go missing or are murdered. The PBS video can be viewed online. Deal has been an artist-in-residence at Denver Art Museum and the Smithsonian Institution. He’s lectured for National Endowment for the Arts and TED conferences, and has appeared on “The Daily Show” with Jon Stewart.

A new law called Savanna’s Act, a bill co-sponsored by Nevada Sen. Catherine Cortez Masto, is aimed at facilitating the sharing of information between tribal and other government jurisdictions and strengthening crime data collection. Another bill, the Not Invisible Act, which also addresses the jurisdictional problems and creates a commission to determine best practices for law enforcement, became law in November.

Secretary of the Interior Deb Haaland in April created a new Bureau of Indian Affairs unit to assist in investigations of missing and murdered Native Americans.

“I look forward to (those) changes, but I previously worked for the Department of the Interior and I know that things go slowly,” McClean said. “Let’s not put our eggs in that one basket and say that ‘Deb Haaland is going to solve this for us.’ It’s not going to happen overnight; it’s going to take time to change things, to get answers and to have justice.”

Panel members encouraged Nevadans to share awareness of the missing and murdered women. They said social media is one way to keep spreading the word (hashtag: #MMIWG2S). They said indigenous women will continue to lead the way in both bringing attention to the problem and fighting its causes.

The general population, they said, has only recently started to become aware of the scope of the crisis that tribal people have long endured.

Mary Gibson, a Western Shoshone land defender, said tribal people can help heal themselves of the trauma by coming together to “honor our traditions and our teaching. We need to listen to the teachings of our elders to find our strength in our families and in prayer as a way to heal ourselves.”

The panel discussion was sponsored by PLAN and its partners, including Great Basin Indigenous Women Rising; the Reno-Sparks Indian Colony; the University of Nevada, Reno, Department of Race, Gender and Identity; and the Intertribal Council of Nevada.

Sales from “Justice for our sisters and Earth Mother” t-shirts and sweatshirts helped fund the program. Those items are available online.

Be the first to comment on "Missing and murdered: more than 1,000 indigenous women killed or missing in the past 40 years"