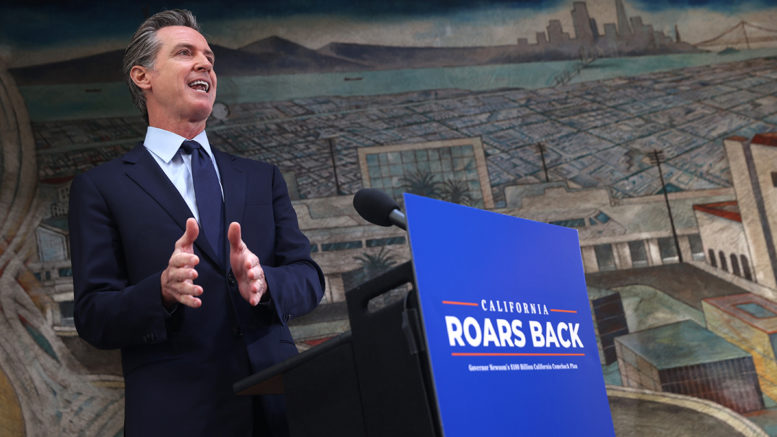 Much as COVID-19’s ravages only became clear over time in 2020, the virus’s effects are likely to recede only gradually in 2021. There are encouraging trend lines in California, but virologists and epidemiologists alike note that as vaccination rates slow, resistant variants multiply and the state opens for business, there will be more infections. These will require treatment and, in some cases, hospitalizations.

But the most widespread future impact may be among those living on the edges of financial stability. Theirs is a nonmedical story, and it looms large. Like the path of the virus, this story, too, may play out over an elongated time frame. And its resolution will determine how many vulnerable California families are able to weather the crisis.

There are two profound challenges facing low-wage earners. The first is basic, if not so simple to solve. When COVID struck the state last year, businesses shut down and people began suffering layoffs in staggering numbers. Many “essential” workers, those in the food and service sectors living paycheck to paycheck, suddenly found themselves unable to pay rent and in danger of eviction from their homes.

California responded by placing a moratorium on such evictions while providing financial relief to landlords, and Gov. Gavin Newsom in January extended the moratorium through this June. The state also moved to access some $2.6 billion in federal stimulus aid to cover up to 80% of tenants’ unpaid rent or mortgage, so long as the landlord agreed to forgive the remaining 20% of that debt.

Recent events may overtake that plan. On Monday, Newsom announced a projected $75.7 billion budget surplus and proposed that $5 billion be used for rent assistance to those behind on their payments, covering 100% of what was owed to landlords, not 80%. The governor, facing a Republican-led recall, also proposed stimulus payments for families earning $75,000 or less. The Legislature would have to approve those measures.

Either way, many low income families are still waiting for their jobs to return, especially those working in hotel, convention, travel and entertainment-related businesses: housekeepers, servers, ushers, airport personnel and many others. Beyond that, economists warn that millions of jobs lost during COVID, not just in California but across the country, are likely never coming back.

So what happens? “It remains to be seen if there’s an appetite in Sacramento to extend the (eviction) protections past June 30,” state Rep. David Chiu (D-San Francisco) told CalMatters. “But I don’t think any of my colleagues have an interest in seeing a wave of mass evictions.”

Last week, a federal judge struck down a national moratorium on evictions, saying that the Centers for Disease Control and Prevention didn’t have the authority to establish the ban in the first place. While that case is being appealed, its effect is muted in California because the state’s own moratorium takes precedence.

For the CDC, the issue is about beating back COVID. Mass evictions could leave tens of thousands of additional California families, and many times more nationwide, without housing. This means more people seeking shelters, packed into congregate living conditions or sleeping in cars or on the streets. That could lead to another surge of the virus and reverse the decline in infections nationally. Research indicates that, prior to the nationwide ban last year, evictions led directly to hundreds of thousands of new COVID cases.

In California, the most viable short-term fix is another extension of the moratorium, along with some form of the rent assistance proposed by Newsom. But it is exactly that, a short-term solution. Until the state can produce conditions or laws that lead to more housing that is affordable to its residents, many will remain vulnerable to this type of extreme difficulty during an economic spasm.

Low-wage earners who have been able to remain in their homes or apartments, meanwhile, now face a serious second challenge: In increasing numbers, they’re falling behind on their bills, many of which allow for no long-term forgiveness.

According to a recent study by the University of California, Los Angeles, between a quarter and a third of all households in L.A. are having difficulty paying for their utilities — having trouble, that is, keeping the lights on and the water running.

It’s not only a Los Angeles issue. Last spring, the California Public Utilities Commission announced that the providers it oversees — all of the major utility companies — were not permitted to disconnect the service of anyone in the state for falling behind on payments. That moratorium, too, has been extended to June 30. But the debt of individuals and families continues to accumulate, and it will all become due in time; in February, the CPUC put the amount owed at more than $1 billion statewide.

Newsom on Monday suggested that as much as $2 billion of the state surplus could be used to pay down those overdue bills, a figure that indicates that the scope of the debt is much larger than the February numbers show.

“When families are unable to pay their bills, they face difficult trade-offs, including skipping meals, delaying or avoiding medical treatment, and risking eviction,” wrote the authors of the study out of UCLA‘s Luskin Center. Furthermore, their report found that utility debt burden “is unevenly distributed across Los Angeles; historically underserved areas and those left behind more broadly during the COVID-19 pandemic are experiencing disproportionate levels of debt.”

That’s the crux of the issue facing California. Among people struggling in arrears on their housing bills and utility debt, communities of color are enduring the greatest financial pain. And many of these families, both in larger urban neighborhoods like Los Angeles and in the small rural areas where farmworkers often live, risk falling off a financial precipice.

Long after the virus itself is under control, such economic issues will fester, and there’s still the strong possibility that these families will continue to struggle to pay rent and utility bills as their job sectors recover slowly and, likely, not quite fully. Their story is, in many ways, the story of California, and the state won’t recover until they do.

Be the first to comment on "Will California prevent a COVID eviction wave?"