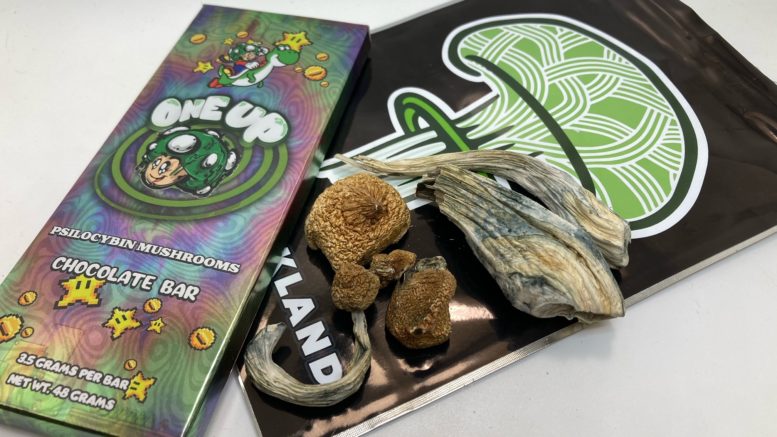 Will health benefits of ‘shrooms’ lead to legalization?

Psilocybin mushrooms, also known as “psychedelic mushrooms,” “magic mushrooms” or just “shrooms,” have been trending locally for reasons that most people might not be aware of.

Psilocybin is being heralded as an effective new approach to what doctors call “treatment-resistant depression.” Several clinical studies in the last few years have validated the therapeutic benefits of mushrooms taken repeatedly in tiny micro-doses, in cases where current pharmaceuticals were no longer effective in treating patients.

Ever since 1970, when politicians bundled Psilocybin and cannabis into the same legal category during the War on Drugs, a close, cultural relationship has existed between the substances. Mushroom users often smoke cannabis towards the end of an experience to better come down from its effects. So, it is not surprising that mushrooms have been quietly turning up for sale within Sacramento’s unregulated cannabis market.

“After smoking cigarettes for 27 years, I quit cold turkey,” said Jacqueline McGowan, founder of Sacramento’s G Street Consulting.  “I kept hearing that [Psilocybin] would help with the cravings and the onset of severe depression, so I decided to start micro-dosing.”

“The first microdose worked instantly and helped improve my mood, so abruptly that, within 30 minutes, I had put on my gym shoes and went outside for a run,” she added.

“Microdosing has been shown to help with depression and anxiety,” said Thomas, a Bay Area mushroom supplier who bakes microdoses into small candies, and who, like several people interviewed for this article, didn’t want to reveal his last name for legal reasons.

“Micro-dosing is particularly important in communities of women and geriatric people,” Thomas explained.

A Sacramento resident whose first name is Amber said, “The very first time I microdosed was four years ago, with the specific intention of calming road rage and relieving my anxiety.”

Since then, Amber microdoses anytime she feels the need or her “brain gets overwhelmed.” Her ideal dosage is 0.2 grams, “but everybody is different,” she says.

Often called “silly-cybin” for its tendency to make people laugh under the influence, the small amount in a micro-dose is designed to reduce the potential for negative intensity.

“It took hours just to notice that I was getting a little giggly,” recalled Jay, a 61-year-old artist who takes 0.3 gram doses on occasion. “There are some enhanced colors, but it’s very subtle.”

Local resident Daniel got his microdoses down to 0.5 grams a few times a week for more effectiveness in dealing with his anxiety.

“After some adjustments to my routine and diet, I started to feel the effects,” said Daniel. “It did not cure my anxiety,” he told SN&R, “but the hard days don’t last as long.”

Legalization efforts have recently ramped up as public attitudes begin to change. Mushrooms are now legal in the cities of Denver, Oakland and Santa Cruz. In 2020, the state of Oregon decriminalized all psychedelic drugs. New York mayoral candidate Andrew Yang recently came out for the legalization of Psilocybin; and last August, the Canadian government allowed a handful of terminally ill patients to use Psilocybin as part of their hospice treatment.

Seeing a future with such legalization, the Canadian pharmaceutical company Champignon Brands wants to include Psilocybin as part of a regimen of drugs to combat depression, in what it says is a potential $10 billion industry.

Sacramento resident Max Cartagena is both a microdoser and a volunteer for DecrimCa.org, a Hollywood-based organization collecting petitions to put a decriminalization initiative on the 2022 California ballot. Cartagena said that a 2020 petition drive was unsuccessful due to the COVID-19 lockdowns. He urges anyone interested in helping the new signature drive to check out Decrimca.org website, where they can read the text of this proposed initiative.

How much is an actual micro-dose?

A 2019 study published by the National Institute of Health placed a microdose at between 0.1 and 0.5 grams. Cartagena has microdosed with 0.1 grams, four days a week, for about two years.

“On days when I am micro-dosing, I notice that I am more compassionate and more caring,” he said.

Cartagena grinds the mushrooms into a powder for more consistency. A microdose is too big, he says, “if you feel like you are starting to trip.”

Cartagena compared the effects of his doses more closely to meditation than to a psychedelic trip.

“You are fully functional,” he stressed, “but for best practices, I would never want to drive.”

But be cautious with full doses

Larger doses of Psilocybin range from 3 to 5 grams, and present a completely different experience. This writer can personally testify that a full dose of any psychedelic drug, whether Psilocybin, Peyote or LSD, can create hallucinations and such an acute psychological reaction that users will lose their own sense-of-self in what is called an “ego-death.”

In some cases, a larger dose can also trigger paranoiac hyper-awareness, or a “bum trip” as hippies described it back in the 1960s.

Psilocybe Cubensis mushrooms were once legal in the Netherlands, until the fall of 2007. Marketed as “magic mushrooms,” they were banned after a teenage girl committed suicide under the influence. Psilocybin did not cause her death, but the incident highlighted other public behavior problems among users, particularly tourists, who couldn’t handle full doses.

But if users can get past the psychological challenges, its widely held that an ideal state of consciousness will expand their imagination and thinking abilities. These cognitive benefits sometimes help people quit bad habits like smoking or drinking, and positively reassess their entire outlook on life.

Hunting for mushrooms in the wild can be deadly. Psilocybin mushrooms are not poisonous, but they are easy to misidentify, according to Todd Spanier, president of King of Mushrooms, which supplies edible fungi to the food industry.

The most common misidentification is with the Galerina mushroom, which is toxic enough to cause kidney and liver failure, and kill someone.

“The overall morphology and general color and look of the mushrooms are almost identical,” said Spanier.

Finally, remember that California law currently classifies Psilocybin as a Schedule I drug. Possessing it is a misdemeanor which can bring up to one year in jail, and selling it is a felony that comes with a possible prison sentence.

1 Comment on "Within Sacramento’s unregulated market, micro-dosing Psilocybin is being heralded for treating depression and anxiety"