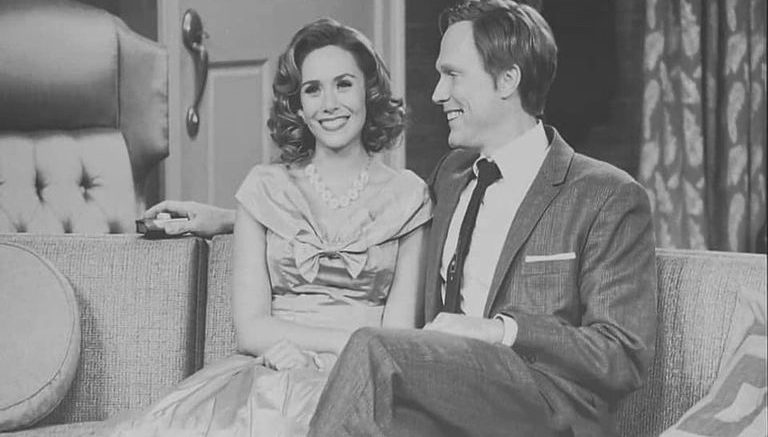 Tonight, viewers around the world are tuning in for the finale of “WandaVision,” a surprisingly original attempt to bring the Marvel Cinematic Universe into the realm of television. When Jac Schaeffer began writing the show in early 2019, she must have known she was asking the studio to take some of its riskiest gambles since the first “Iron Man” script. But what Schaeffer could not have known is how wrenchingly relevant her story would be once it finally aired.

That’s because the plot of “WandaVision” was penned in a different reality. Literally. And this is what gives it such unexpected force – the tale of a woman who changes the fabric of her own existence in order to escape the truth and tragedy of her life.

It is hard to believe Marvel charted such a cerebral maiden voyage for extending its box office success to Disney’s new steaming service. But the studio’s sense of security speaks to the broader atmosphere “WandaVision” was conceived in, a world where executives could easily imagine movie theater magic flowing straight into peoples’ homes through their Disney-plus subscriptions. It was a world that had a muscular American economy, historically low unemployment and no immediate existential threats beyond obsessing about politics.

It was also a world that had movie theaters.

When “WandaVision” debuted on Jan. 15, it was airing amidst a collection of completely different lived experiences. Millions of people had lost loved ones. Millions more had lost their careers, their businesses, their neighborhood institutions. Far too many had lost everything that they’d ever worked for through no fault of their own. And under the smoke-choked skies of California, the contrast was even starker, after months of deadly wildfires and numbing spikes in suicides and overdoses.

But perhaps for all those reasons, “WandaVision” fits the moment; and not because it doubles-down on parent company Disney’s cheap, rampant and constant manipulation of nostalgia – particularly under the banner of Lucasfilm – but because it’s a thoughtful warning about that very psychological sinkhole.

Of course, this isn’t clear in episode 1. What is clear is that Schaeffer and director Matt Shakman have broken completely with the highly formulaic approach of the MCU. When viewers last saw Wanda Maximoff in “Avengers: Endgame” (the top-grossing movie of all time), she was gazing at a serene lake, having lost her husband, her brother and one of her best friends, and herself having been vaporized in a cataclysmic event, only to be brought back to a world that she barely recognizes. Wanda returned, but the people she loves can’t.

Episode 1 of “WandaVision” opens in black-and-white, with Wanda and her presumably dead husband, Vision, happily driving through the Norman Rockwell-esque charm of a town called West View. This doesn’t seem to be the world “Endgame” closed on. This is the early 1950s. This is the America where, as Hunter S. Thompson put it, people “fought for Mom, God and apple pie.” With no reference to the past or future, the couple start playing out their own quasi episode of “I Love Lucy,” a show that aired when few MCU fans were even alive.

Social media was a hive of perplexity, though the radiant charisma of leads Elizbeth Olson and Paul Bettany kept most viewers interested. Episode 2 also opens in black-and-white. It finds Wanda and Vision stumbling through an array of comedic misadventures, the show’s dialogue and cinematography a faithful homage to “Bewitched” and “The Dick Van Dike Show.” At that point in January, the series was proving that Bettany is as versatile as we thought he was, and that Olson is more talented than anyone knew. However, the general head-scratching from fans continued. There were only two brief moments in the story to tease that, if this really is some late-night rerun flickering on the Nickelodeon Chanel, it may not actually be “I Dream of Jeanie.” It might be “The Outer Limits” or “The Twilight Zone.”

The tension between tonal illusions grows with each succeeding episode. The opening credits continue as impressive, spot-on tributes to warmly remembered moments in television, Wanda and Vision effortlessly inhabiting the worlds of “The Brady Bunch,” “Family Ties,” “Growing Pains,” “Malcom in the Middle” and “The Office.” But after feeding these sparkling member-berries to the audience, each show keeps descending into more and more moments of the off-putting and the uncanny.

Given that the MCU is fundamentally about mutants and superbeings with personal problems that viewers can relate to, it becomes clear – without knowing the plot points or ending – that Wanda is a woman so emotionally obliterated by the recent losses in her life that she’s somehow tapped into an unknown power that lets her carry on as if she’s never sacrificed anything. It’s a kind of preternatural VR chamber she’s stepped into, calming in its afterglow – terrifying when it glitches. And Wanda hasn’t just re-created the life she actually had, she’s kept reaching farther and farther through the imagined times and fictional epochs of American television, pursuing a level of comfort – an ideal of perfection – that her true existence never really possessed.

That’s the dragon we chase with the opiate of nostalgia.

None of this is to imply that “WandaVision” is a perfect show. Its efforts to keep a strong continuity with the MCU feel over-labored at times, and there’s nothing particularly novel about its hidden villain. But within the context of Marvel Studios, it is the most intelligent, inventive and edgy script its writers have ever attempted. It also feels like a repudiation of Marvel’s sister company, Lucasfilm, whose profit-driven plundering of past glories started with the ramshackle embarrassment of “Indian Jones 4” and then culminated with the three-barrel garbage fire that is the Disney Star Wars sequel trilogy.

We’ve all lost someone or something we care about in the last 12 months. Some have lost far more. It’s natural right now for anyone to daydream about what they’d do – what they’d alter – if they could move through time or treat causality not like a chain but a chessboard. What if? What if? But what “WandaVision” so masterfully expresses is that dwelling on such fantasies can be isolating, even paralyzing. It can blind one to the real possibilities in front of them. So, yes, Schaeffer and Marvel Studios couldn’t have predicted the show would land during a global crisis, but by ditching bland Hollywood conventions to embrace a fresh storytelling approach aimed at universal truths, they didn’t need to.

Be the first to comment on "WandaVision: Omens, trauma and the seduction of the past"