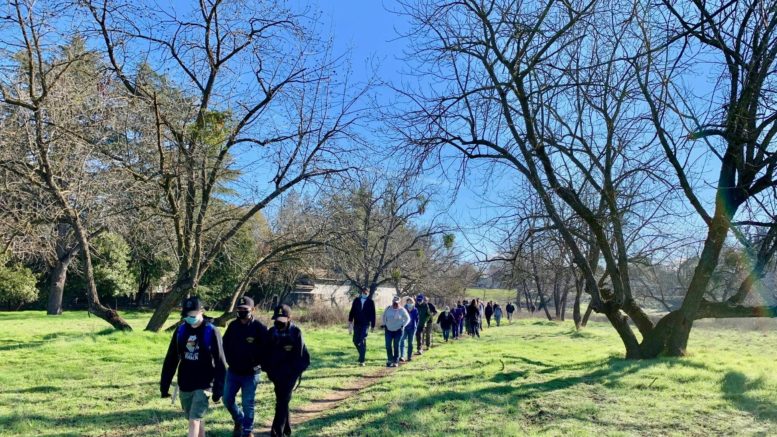 Developers want to build over a rare natural hideaway along the American River, but neighbors and conservationists say not without a fight

On the west edge of Rancho Cordova, there’s an escape from the paved-over eyesores of modern life. It’s a lush, sprawling basin studded in black walnut trees and old grand oaks—a refuge along a secluded shoreline of the American River that’s home to deer, bobcats, coyotes, red-shouldered hawks and Swainson’s hawks. Directly across the river, rookeries are bustling with nest-building by white egrets and Great Blue Heron.

Beyond the peace in this urban oasis—and the access it provides to one of the most unspoiled views on the river—the land has deep roots in California history. In 1986, an archeology student unearthed 3,500-year-old human remains believed to be those of a Native American traveler. Just 100 feet from where they were found, archeologists discovered more human bones and village artifacts from the likely forebears of the Nisenan tribe. In the 19th century, the land was owned by William Leidesdorff, considered an African-American founding father of the Golden State. And its half-secret pathways are now federally recognized segments of the Immigrant Trail and riding routes for the Pony Express.

Fans of this serene hideaway, known as the Kassis property, assumed that city authorities would protect it, or that a nonprofit would eventually take it into stewardship.

But such comforting hopes evaporated in August when it was revealed that a Kansas City company is planning to build over the land with a large-scale housing development.

Now, a coalition of residents and conservation groups want to save the property from becoming yet another battery of tract homes.

“Concerns about this project? Where to start?” said Ralph Propper, president of the Environmental Council of Sacramento. “We’re very concerned about protecting the last significant open space along the American River.”

The Kassis property includes 40.7 acres that form an alluvial terrace on its upper plateau, and a lower basin that stretches along the river in the 100-year floodplain. There are 335 trees in the formations, split by a grassy, 30-foot-high bluff at the edge of a quiet neighborhood. For years, the property was owned by John P. Kassis. After his death, its title transferred to members of his family.

Many assumed the property was safe from development because it had been zoned for agricultural use. Then in 2013, the city of Rancho Cordova rezoned it for residential mixed use.

However, very few people in Rancho Cordova, including those living near the Kassis property, knew that had happened. Mark Berry, a longtime member of the American River Parkway Association, lives 500 feet away and said he had no idea. Berry says his neighbors didn’t know, either. The community found out seven years after the fact when a housing developer called TruMark started mailing notices about a major development it was proposing.

“We were all shocked,” Berry recalled. “We’d all assumed it would always be agricultural land and place where they could never build along the river. … It’s ridiculous—just a feeling of disbelief and anger; and the city’s lack of foresight and disclosure is so bothersome.”

According to TruMark’s current plans, it intends to rip out every tree on the property as it builds 244 homes, including a line of 24 houses on the riverfront. The company is also planning to move huge amounts of excavated dirt from the property’s upper plateau into its lower basin to raise the entire basin floor by ten feet.

That’s caused alarm in the neighborhood immediately above the basin because of potential flooding. But for many others in Rancho Cordova, it’s the prospect of losing one of their last true open spaces that is causing the greatest amount of angst. Berry says that TruMark has also proposed obstructing an easement on the property—one that’s existed since the 1970s—that currently allows members the public to walk along the shady tree bower while accessing a pristine part of the river.

The Save the American River Association has condemned TruMark’s proposal as an unimaginative attempt to profit off land that’s “irreplaceable” for future generations. The association is circulating a petition to the city of Rancho Cordova, requesting the lower basin be spared for good and that the upper plateau not be developed under TruMark’s current plans. It has also posted to its website an aerial video of the Kassis property highlighting its beauty.

Sergio Diaz, who lives by the lower basin, has been showing the land to bird watching groups, the local Boys Scouts and others as his neighborhood revs up opposition to TruMark’s plans.

“The developer and the city seem to be very tight, and the city has been really committed to this project for a while now,” Diaz said. “When I talked to the city manager, he said that’s because the project could have been so much worse in terms of the number of housing units proposed. But just because a project isn’t as bad as it could be, doesn’t make it good.”

TruMark did not respond to multiple interview requests for this story. The city says it is listening to residents.

“We understand that residents are concerned,” said Darcy Goulart, the city’s project planner and planning manager. “We have been reading all the correspondence we get about it, and we’ve been listening and responding.”

Lisa Pappas lives on a gentle slope descending into the lower basin that makes up much of the Kassis property—and on the exact spot where Native American remains have been repeatedly discovered over the years. It started in 1937, when Sacramento Junior College professor Franklin Fenega supervised the excavation of 132 lineal feet of trenches, which unearthed one adult and five children. Those remains were documented and then uncovered again in 1964 during construction on an underground irrigation system. Between 1983 and 1987, UC Davis and Sacramento State University led a joint archeological dig on Pappas’ property, which in turn revealed more village artifacts and ultimately the bones of the 3,500-year-old traveler, believed to be the oldest human remains ever found in Rancho Cordova.

Pappas says the Kassis family never allowed the archeological work to extend onto their property, but experts believe the village likely does reach that land. When Pappas built her own house in 2005, she worked closely with the Native American Heritage Commission on a conservation agreement. That plan included ensuring that the human bones would remain repatriated on her property. It also meant that all digging for construction had to be done by hand and overseen by an archeologist. Pappas says the plan stipulates that if any more remains are found during future alterations to her property, she’s financially liable for whatever action the heritage commission deems appropriate.

Pappas has the confidential dig records and boundary maps for the archeological work done in the basin over the years and says she has shared that information with the city of Rancho Cordova. Pappas says city officials haven’t given her a straight answer on how they’ll handle the issue if construction is allowed on the neighboring Kassis property.

“I’m worried about the destruction of Native American artifacts,” Pappas told SN&R. “The city hasn’t been able to tell me what happens if the developers do dig, and then hit Native American remains. They haven’t said who is then going to have to pay for a full excavation and re-internment. I know what I had to do for my property, but they haven’t been clear about how they would treat a builder with a lot more money.”

After years of researching the history of the lower basin, Pappas also became aware of another important aspect of the land that TruMark wants to build on: It was a part of the 1844 Rancho Rio de los Americanos land grant the Mexican government issued to Leidesdorff, who helped establish the city of San Francisco, was the first Black leader to hold public office in California and is thought to be the first African-American millionaire in the history of the nation. Pappas says Leidesdorff’s land grant was rare in that it expressly preserved the rights of Native Americans living along the American River. Between that and the basin’s connection to the Immigrant Trail and Pony Express, Pappas said she believes the Kassis property should be made into an educational resource for nature and history rather than a housing development.

“A lot of parents want young people to have a way to learn about things while they’re getting outside and experiencing the outdoors,” she said. “This place would be ideal for that.”

The city of Rancho Cordova doesn’t have a planning commission, so its council members will vote on TruMark’s proposal after weighing only input from their staff, the developer and the public. Despite the flood issues, habitat concerns and Native American heritage, opponents of the development are worried that the city won’t require to TruMark to do a full Environmental Impact Report before council members vote. They’re predicting instead that the city will ask TruMark to do a negative declaration, a much less thorough form of environmental review.

Goulart told SN&R that the city planning office is still deciding on the issue of an EIR.

“We’re doing multiple studies and we’re in the fact-finding phase, so we haven’t made a determination yet,” she said. “We’re going through a process, and in the case of this project, there is a lot of data we have to go through.”

Goulart added that the city has set up an informational page for the project on its website and that members of the public can email her with feedback and concerns. She stressed that’s already been happening.

Diaz says he hopes the city will start thinking in more innovative ways about the property, including the possibility of buying it for a city park, or helping the county parks department or a conservancy with purchasing it. He says TruMark’s critics understand that the land is private property and that Kassis family has a right to profit from it. But, he adds, the city should make sure that doesn’t happen in a way that’s detrimental to the community.

“The city portrays itself as being very green and looking into the future,” Diaz said. “But if they have those intentions, why aren’t they acting on them?”