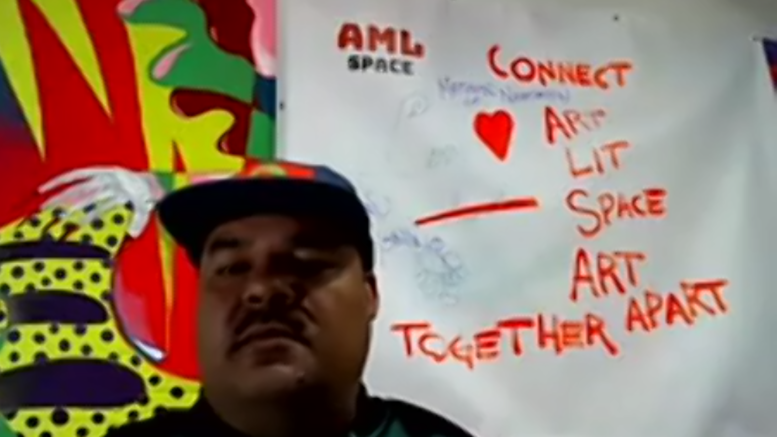 The first exhibition of the year by Art Music Lit Space, Survival Sounds questions what it means to exist digitally during the pandemic

During the tenth month of the pandemic Saturday night, following the “COVID castle” and an attempted coup, Tavarus Blackmon began the opening reception for the latest digital exhibition on Art Music Lit Space, Survival Sounds, by recounting the numerous horrors the world faced in the last year.

“Murder hornets, fire tornadoes, coups. It seems like this year’s just been one supremely, unprecedented, weird, fucked up thing after the other,” Blackmon said. “But you know, we’re still here.”

Art Music Lit Space began in April 2020, soon after the stay-at-home orders went into effect. Blackmon launched the site as a “locus” for creatives to connect and share their work during the mass closures caused by the pandemic.

Survival Sounds is Art Music Lit Space’s first exhibit of the year. It features auditory work by its curators, Blackmon, Joy Miller and Derek Kwan. A contest between the digital and haptic world is present across the exhibition.

In “Roll Study 2.1,” Miller acts out a conversation between herself and an edited audio clip of her own voice. It begins with a compressed imitation of a rain forest; Miller’s digitized voice asks, “What comes out?” Miller then says, “A start.”

“Those sound pieces in survival sounds are kind of an exploration of a fragmented experience. I think so much of my work is an attempt to pin something down that won’t be pinned down,” Miller said during the opening reception. “If I think about it too much, then I start to go in circles.”

“Frames of Reference” is an electronic album produced by Kwan and is next in the exhibition. The six-song album boasts tracks with such titles as “Snowblue Passage,” or “Ember Continuance,” each inhabiting a different atmospheric world.

Kwan created the layered digital soundscapes between last July and December using TidalCycles, an open-source coding music software. In addition to the hour-long album, which sounds like how I imagine a computer dreams, Kwan created “Bombay Beach,” a five-and-a-half-minute video featuring scenes from around Bombay Beach.

“I guess that’s a product of the pandemic, and it wouldn’t have happened if it weren’t for the pandemic,” Kwan said.

Finally, Blackmon rounds out the show with “<3” an eight-and-a-half-minute ballad that opens with a naïve piano ambling across a simple tune. Soon, angelic voices encourage the piano, whose tune grows more complex.

In the drop of a bass, the entire tune takes on an almost depraved nature, the naïve piano drowned out by heavy distortions. Blackmon sings from the perspective of the protagonist: “I want more control, I look inside your code, you’ve got the password to my soul.”

“I just wanted to make a piece about like infatuation and then it took on this narrative of a protagonist making a love song to their computer,” Blackmon said.

In 73 minutes, Miller, Kwan and Blackmon offer radically different views on their relationships to the digital. For Miller, it is a frustration at the inherent inhumaity of the machines, for Kwan, the infinite potential of algorithm-based soundscapes, and for Blackmon… a date?