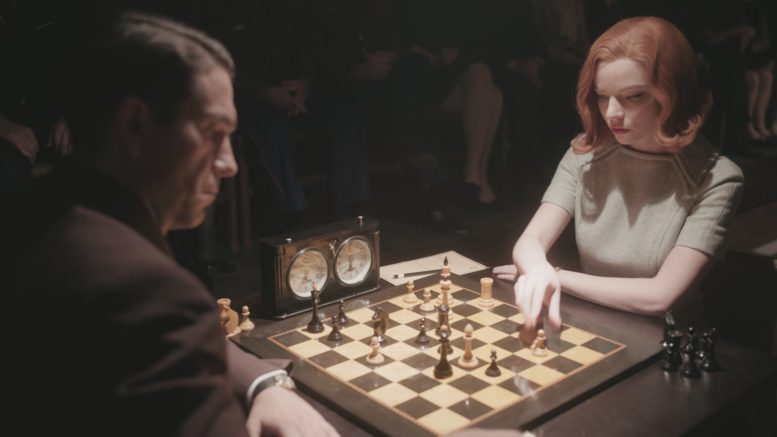 Chess never looked as good as it does in the Queen's Gambit.

The Queen’s Gambit tells a familiar story in a refreshing way, but struggles with making its side characters feel real

The show begins in a dark hotel room. You hear a French-accented voice call out “Mademoiselle?” following a rapping at the door. A hand desperately grabs at the side of a bathtub. A splash, a thud and a grunt as Anya Taylor Joy’s character, Elizabeth Harmon, trips through the darkness. She answers the door, says “Je descends, tout de suite,” (I’ll be right down.) A stark title card appears against the pitch darkness that reads, The Queen’s Gambit.

The Queen’s Gambit is a drama miniseries set in the niche, 1960s world of competitive chess. It tells the fictional story of an orphaned chess prodigy Elizabeth Harmon, played as a child by Isla Johnston and as an adult by Taylor Joy.

The show itself is artfully shot. Dramatic lighting heightens the mood and the camera smartly lingers on closeups of Taylor Joy’s captivating performance.

Based on the novel of the same name by Walter Tevis , written and directed by Scott Frank (who also steered Netflix’s Godless) and co-created by Allan Scott, the show was released on Oct. 23, 2020.

Despite its accomplishments, The Queen’s Gambit suffers from a lack of well-written supporting characters. Yes, Harmon is the protagonist, but the show doesn’t give enough credit to the side characters, without whom she could never have completed her eleven-year journey from the fictional Methuen Orphanage for Girls to the Moscow Invitational.

It features a standard descent-into-madness-in-pursuit-of-greatness story structure. Think of films like Whiplash, The Black Swan or Nightcrawler, all of which feature a character who wants to be the best in their field, but becomes sidelined by personal demons.

Unlike those films, The Queen’s Gambit tells its story over the course of seven episodes, showing the audience Harmon’s full descent, from her first opening, to her final checkmate.

Her pursuit begins in the basement of the orphanage in 1957 where she meets the janitor Mr. Shaibel, played by Bill Camp, who teaches her the basics of chess. At the same time, she develops a taste for opioids, introduced to her by her first friend at the orphanage, Jolene, played by Moses Ingram; Harmon later begins to use the pills to ease her stress before important games.

From there the story develops naturally, Harmon learns more about the world of competitive chess and begins to claw her way toward her goal of becoming a chess World Champion— the highest ranking in chess next to the International Chess Federation (FIDE) awarded title of Grandmaster.

One of the biggest challenges that the show had to overcome was figuring out how to translate the cerebral experience of a chess game to the screen. The show refuses to hold your hand too, relying on the viewer to read Taylor Joy’s subtle expressions or to figure out the meaning behind the juxtaposition of certain shots or the use of musical cues.

The show is finely polished; foreshadowing done in the first and second episodes don’t pay off until nearly the end of the miniseries. While it’s commendable not to talk down to an audience, The Queen’s Gambit tells a story so familiar that it’s unlikely you will be unable guess the ending, but it’s the quality of the performances and not the plot that will keep you hooked.

The show fails to let its side character’s voices reverberate through the show when they are not on screen; their effect on the story should create echoes that are revealed in subtle ways through Harmon’s character.

While the show is by many accounts a success, a major hurdle the show suffers from is the way it completely sidelines its supporting characters. Jolene disappears from the show after the second episode and doesn’t return until the very end in what one Twitter user described as, “the magical negro” trope.

The term, first used by Spike Lee in 2001, the “Magical Negro” refers to a Black character in film or television who comes to the white characters aid at the moment of their need with special insights and no history. Jolene is introduced in the first episode only as the girl who hasn’t been adopted at the orphanage, after serving her function— introducing Harmon to opioids— she disappears completely and the audience learns nothing about her.

Jolene’s character isn’t the only one to be sidelined in favor of Harmon’s journey, Mr. Shaibel (my favorite character in the show) introduces Harmon to the rules and etiquette of chess. He teaches her everything he knows and provides early, necessary encouragement for her to pursue her dream, yet after the first episode and a single letter, it’s as if Harmon completely forgot he existed.

One could argue that it is character motivation— that she’s so focused on being the best, she’ll sacrifice her past— but watching the show it’s clear that isn’t an intentional aspect of her character. With so many characters across such a large span of time, it is inevitable that some characters are only part of Harmon’s life for short spans.

However, the show fails to let its side character’s voices reverberate through the show when they are not on screen; their effect on the story should create echoes that are revealed in subtle ways through Harmon’s character and behavior, but the show stumbles slightly in that regard.

The strongest connection Harmon develops through the course of the show is with her adopted mother, Alma Wheatley, played by Merielle Heller. The relationship is stilted at first— her new mother isn’t a coddling figure of maternal adoration— she treats her respectfully, but from arms-length. Ultimately though this mutual respect evolves into a self-destructive kind of love.

This unconventional, mother-daughter-manager relationship Harmon develops with Wheatley through the course of the show is one of the few lasting relationships which seemed to deeply affect her core character.

The strength of The Queen’s Gambit doesn’t come from the already niche subject matter and it doesn’t come from the creator’s attention to detail (but good luck finding even a single chess board that breaks continuity.) The Queen’s Gambit is the story of a girl, who, in the course of becoming the best chess player in the world, realizes that the real treasure was the prize money she made along the way.

One thing is clear based on online reactions: Netflix did good with this show. After years of peddling trash like Ratched, Another Life, Paradise PD, it’s nice to see the powerhouse that disrupted the entertainment scene seven years ago with House of Cards (that hasn’t aged well) is still able to make decent entertainment.

Be the first to comment on "Review: ‘The Queen’s Gambit’"