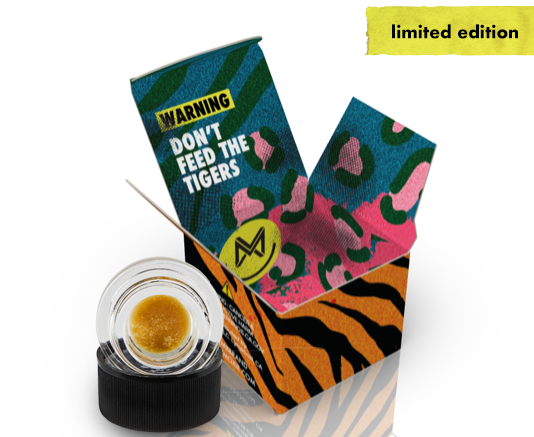 In response to the controversial tiger trade seen on the popular Netflix docu-series Tiger King, Moxie released a line of batter and donates a portion of its proceeds to the World Wildlife Fund. (Photo courtesy of Moxie)

The Netflix true crime docu-series, Tiger King: Murder, Mayhem and Madness, premiered on March 20 and drew a cult-like following overnight as it examined an exotic animal business with an eccentric, even unbelievable, cast of characters.

The show centers on the life of Joseph Maldonado-Passage aka “Joe Exotic,” a controversial big cat collector and breeder with a bleach blonde mullet who lives in Oklahoma. The eight-episode series, which aired its finale last weekend, is a twisted tale of murder-for-hire and of the conflict between conservationists and the illegal wildlife trade, with polygamy, cults and a drug lord sprinkled in for good measure.

But beyond its bizarre entertainment, the series spotlighted animal exploitation, with lions and tigers forced to live in poor conditions inside makeshift zoos.

With millions streaming the show, Southern California cannabis company Moxie stepped up to raise both awareness and funds toward a larger cause.

“After watching the episodes, our team got together and felt like it was an atrocity to the animals,” said Tessa Adams, head of marketing for Moxie. “They were getting so mistreated across all of these so-called zoos that each of the characters were keeping. We just felt like we had an opportunity to kind of jump in and help generate more awareness toward that.”

Moxie released a limited edition Tiger Collection that features two strains of “batter,” a high-terpene, full-spectrum extract created specifically for dabbers. The strains are Tiger’s Blood, bred by crossing Goobers and Wildfire, and Cool Cats Cush, made by crossing Wildfire and Wedding Cake. Each strain is sold in one-gram increments and is available in Sacramento dispensaries such as Dr. Greenthumb and Alpine.

Moxie will donate $1 for every $31.99 unit sold to the tiger protection fund at the World Wildlife Fund.

Tiger’s Blood boasts blood orange aromas with hints of allspice and pine—and it’s a sativa. Cool Cats Cush, an indica, lists robust earth, pine and black pepper notes. Both are batters and Adams said they have a similar consistency to a grass-fed butter.

“It’s very similar to a sauce. It goes through a multi-step process … We essentially take it and we hand-whip and it becomes a cake batter-like consistency, which is why it’s called ‘batter’ as opposed to a ‘sauce’ or a ‘shatter,’” Adams told SN&R. “They’re very soft and saturated and it’s definitely a favorite of our dabbing community.”

While this is the company’s first, large-scale effort to fund animal rights, since the COVID-19 outbreak, Moxie has also donated hand sanitizer to local community centers and hospitals, as well as its delivery customers and dispensaries.

“I think something that’s super important to us is the environment and creating a sustainable future for all of the generations to come,” Adams said. “We think about that in terms of the human aspect, but that includes the animal aspect as well. They are such an integral piece of the environment that they live in. It definitely aligns for us in our mission to help with any and all environmental causes that we can.”

Find Moxie’s Tiger Collection at the following dispensaries. For each unit sold, $1 will be donated to help end the tiger trade for the World Wildlife Fund.

Be the first to comment on "Now, that’s Moxie"