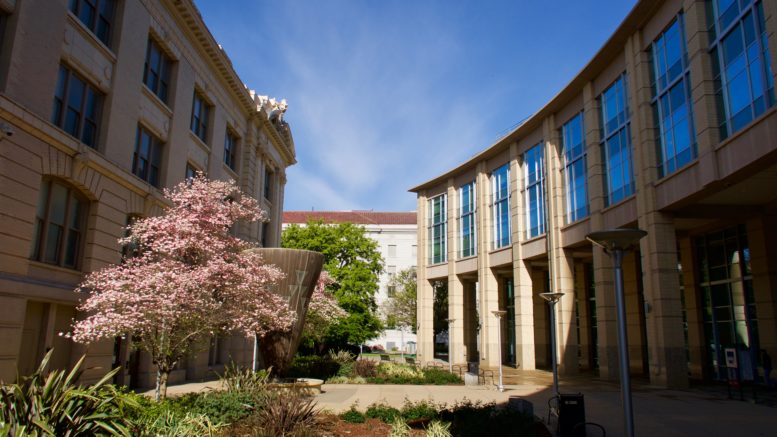 A spate of recent tragedies have some leaders at Sacramento City Hall worried about more than the immediate threats of the pandemic and financial collapse. (Photo by Scott Thomas Anderson)

For Sacramento Mayor Pro Tem Angelique Ashby, the jarring news flooded in from different directions: Police, school officials, parents, neighbors. It may have come in fragments, but it painted one bleak picture—and raised an inescapable question.

On April 6, some three weeks after California cities started locking down, Sacramento experienced two teen suicides and a murder-suicide in a single day. Both teens lived in Natomas, though they didn’t know each other. The couple that died lived in South Sacramento.

While no community is immune to such tragedies, Ashby and others at City Hall are haunted by the possibility that what happened on that devastating Monday wasn’t a coincidence. The widespread fear and anxiety around COVID-19’s death toll, coupled with the family stress from job loss and extreme loneliness during the stay-at-home order, may all be spreading a silent mental health disaster.

Now, Ashby and Mayor Darrell Steinberg are looking for ways to get ahead of that curve, particularly for the area’s youth.

Ashby decided she needed to make the suicides public at a City Council meeting the following day. She later told SN&R that, in addition to learning of the suicides and murder-suicide, she had been hearing from mentally drained and emotionally desperate families in her Natomas district.

While Ashby supports the lockdown, she knows it’s taking a tremendous toll on some. Yet, when Ashby tried to start that dialogue, some of her colleagues glossed over it, continuing to pressure the city manager to close off more public spaces. Constituents were demanding huge stay-away signs at basketball courts and tennis courts. Residents have been calling City Hall to report joggers running too close together. People in Tahoe Park told Councilman Eric Guerra they wanted physical barricades erected around playgrounds.

Ashby again tried to steer the conversation away from judgment and social distancing shaming and refocus it on mental health. Referencing the teen suicides—one a 15-year-old girl who attended Natomas High School, the other a 16-year-old boy who lived in South Natomas—Ashby asked her fellow council members to think about the unprecedented strain on youth and families.

“I know COVID is the number one thing, but I can feel the beat of the heart in my district, and it’s right on the edge,” Ashby said.

While Asbhy’s words drew little response from some colleagues, District 8 representative Larry Carr shared her concerns. He lives just around the corner from the house where the murder-suicide happened.

“That was an elderly couple, so I think it’s not just kids that are suffering,” Carr said. “It’s everybody in the community.”

Steinberg, a driving force behind the 2004 California Mental Health Services Act while a leader in the Legislature, pledged to work with Ashby on finding funding for additional youth outreach as well as potentially expanding the state’s youth crisis hotline.

The youth crisis hotline was actually started 20 years ago by Ashby’s father, Patric Ashby, who ran California’s foster care system. In the early days, it was called the California Runaway Hotline. Angelique Ashby remembers being a student adviser when she was 12, which made her keenly aware of kids in crisis. Following her father’s lead, it has been an interest ever since, but she says her awareness has never been quite as heightened as it is now.

In conversations with parents, school officials and students who belong to the District 1 youth program, Ashby has been hearing about students experiencing stress, depression and even feelings of desperation. That worries her, especially in light of the recent suicides.

“The difference between an adult and a child who’s isolated is that we, as adults, have a lifetime of tools to try to deal with it,” Ashby told SN&R. “Everyone is having big feelings right now, and teenagers have to manage emotions and awkwardness and difficulty on a good day. But then you add COVID to that mix. It’s so hard for them to figure out their place in all this.”

Ashby also notes that anyone familiar with juvenile crime or child abuse understands that, for some students, going to school is a daily reprieve from violence and strife in their family life.

“Unfortunately, for some of these kids, school is like heaven compared to home,” Ashby said.

“Everyone is having big feelings right now, and teenagers have to manage emotions and awkwardness and difficulty on a good day. But then you add COVID to that mix. It’s so hard for them to figure out their place in all this.”

Hillary Van Horn-Gatlin, a pediatric psychologist who runs the behavioral medicine program at Kaiser South Sacramento, says the impact of the coronavirus pandemic varies depending on the age group.

“For teens, there’s the loss of time with friends and things like prom and graduation and other big moments,” Van Horn-Gatlin said. “And some of the most important relationships in their lives, right now, are these peer relationships. For kids who are in that age group of grade school, under junior high, they’re being asked to be independent on a level they’re not necessarily ready for.”

Van Horn-Gatlin advises parents to watch their children’s behavior, paying attention to mood swings and unusual eating and sleeping habits. If something seems off, her advice is to contact a physician. Van Horn-Gatlin also recommends parents monitor their own mental health, since stress can flow downstream to children.

“Kids pick up on things, so it’s kind of a perfect storm,” she said.

The countywide stay-at-home order has affected many in-person doctor’s appointments and therapy sessions, moving non-emergency visits to video or phone. While virtual counseling and tele-health appointments may seem foreign at first, Van Horn-Gatlin says they’re turning out to be an effective way of delivering mental health services.

Sacramento County’s behavioral health department is continuing its counseling services, though in ways that adhere to physical distancing, such as video conferences. County spokeswoman Samantha Mott said that Source Sacramento has a support network that’s geared towards youth and caregivers. Its website is thesourcesacramento.com and its phone number is (916) 787-7678.

“We are seeing a lot of people reach out because of COVID-related anxiety,” Van Horn-Gatlin said. “But I also think a lot of families are waiting it out and not contacting us for help. I want people to know everyone in our field is working together to try to provide excellent care to off-load some of that stress right now, rather than down the road when things reach a breaking point.”

On April 13, Steinberg focused on mental health during his daily Facebook Live update, including a conversation with David Bain of the National Alliance on Mental Illness.

School districts are also trying to help students. The Natomas Unified School District is providing laptops and Wi-Fi hotspots for all of its students, not only for distance learning, but also for check-ins. The district sent a message to families this week saying it was partnering with Care Solace to provide 24-7 mental health support during spring break.

Ashby is concerned that finger-pointing and judging during the lockdown will only add to a blanket of stress and anxiety over Sacramento, while also weakening its sense of community when that solidarity is needed most.

“We need to make this about education and compassion, and we need to lead with our hearts,” she told SN&R. “And I think we need to give some grace to people by acknowledging that, when we see someone in the park, we don’t know everything that’s happening in their lives—and we shouldn’t assume we do. Right now, we need to strive to see the best in each other.”