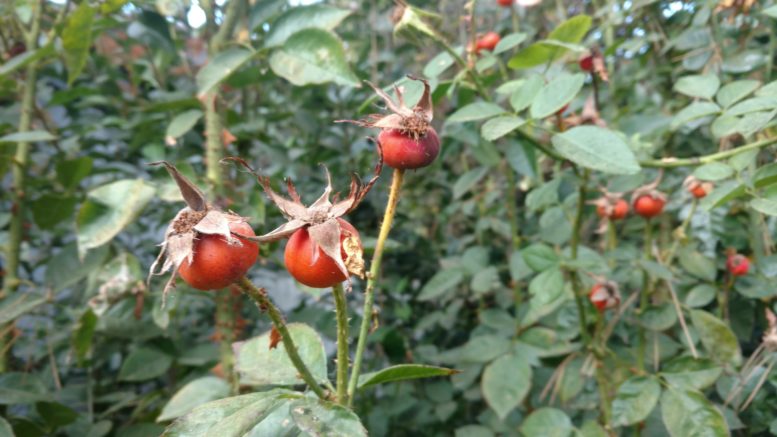 When allowed to ripen, rose hips (the plant's fruit) cue the bush to stop blooming and rest. (Photo by Debbie Arrington)

It’s time to tell your roses: Knock it off!

Roses need pruning to revitalize the bush and reset their biological clock. Otherwise, canes sprout atop canes, creating tangled messes 10 feet tall (or more) with blooms way out of reach.

You can’t smell the roses if they’re way over your head.

I know from experience. As a gardener, roses are my specialty; I’m a “master rosarian,” a designation awarded by the American Rose Society. I grow about 140 bushes in my own garden, all of which need pruning. They give me plenty of practice.

Local public rose gardens have already started clipping away, trying to get a jump on this annual chore.

“Our pruning actually starts in November by pruning out dead wood from the roses,” said Lyn Pitts, who oversees the Memorial Rose Garden at McKinley Park. “When you have over 1,200 roses to prune, it really helps to get that old dead wood out of the way!

“Then in December, I normally have lots of hands-on pruning clinics for rose bushes, climbing roses and tree roses as well as many opportunities for volunteers to come and prune the western half of the McKinley Rose Garden,” Pitts said. “We try to prune the western half—approximately 600 roses—before Dec. 25.”

And, as we’ve seen recently, there’s no predicting when wet weather will hit. Get out the pruners while the sun shines.

“The best time to prune is when the last frost has passed, the buds are swelling and the extended forecast is warming,” said T.J. David, founder and curator of the World Peace Rose Garden at Capitol Park.

Using the last frost as a milestone, that would be sometime in late February, but that’s long after most roses are pruned in Sacramento. It’s better to prune here while the bushes are still sleeping in the dead of winter.

“I usually recommend it’s a great time to prune in the Sacramento region from approximately Dec. 15 to Jan. 31 or, if really necessary, up to the first week in February,” David said.

How do you get a rose bush to slow down and take a winter break? Allow rose hips—the rose fruit—to ripen. Instead of clipping off spent blooms, let the hips that swell at the base of each flower turn deep red-orange. That cues the plant that its work is done for this year.

After the hips mature, the bush will drop its leaves and stop pushing out fresh growth. That makes winter pruning much easier.

“You’ve got to remember to strip off any remaining leaves,” David explained.

Remaining foliage, even if it looks green and healthy, may be harboring fungal disease such as rust, blackspot or powdery mildew that can infect fresh leaves in spring.

This time, there may be more; renovations at McKinley Park have slowed pruning progress. Said Pitts, “January will be a very busy month, catching up the pruning!”