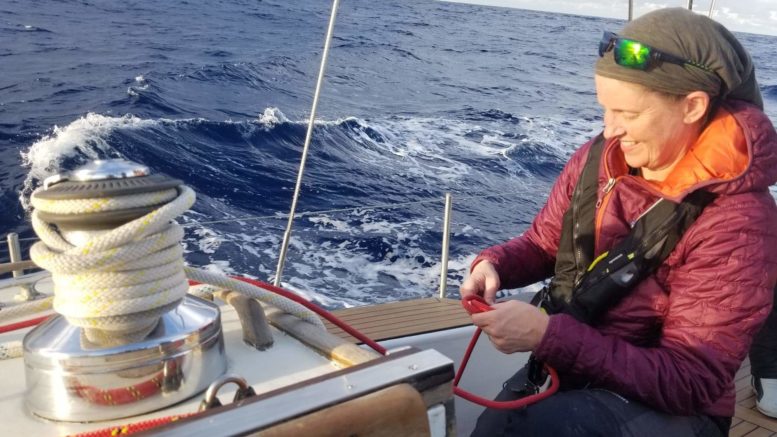 Archeologist Kimberly Wooten studying the impacts of plastics on the oceans during the eXXpedition Round the World in October.

Kimberly Wooten was in the hull of a sailing ship, watching women vomit all around her when a crashing and clamoring suddenly thundered overhead. She heard desperate voices swallowed by the winds.

“Everything’s amplified down below, it’s like a horror film,” Wooten recalled. “It’s this echoing, this pounding, this huge flapping sound.”

The skipper appeared, screaming for all able hands on deck. Wooten climbed up a ladder and into a storm-swept nightmare. Waves were lifting the bow at a 45 degree angle as towering swells threatened from every side. Wooten saw the ship’s main sail had come down, torn right out of its rigging. One of her crewmates had hit her head on a winch and was knocked unconscious. Wooten began crab-walking through the howling gusts and spraying surf. Before the ordeal was over, there were blood streaks in the hull and sailors warned Wooten and her team that the vessel might go down.

“I thought I was going to die,” Wooten admitted.

For Wooten, who grew up in El Dorado County and now lives in Jackson, that terrifying moment was the price of being part of an international, all-female team of professional and citizen scientists traversing the globe. Dubbed the eXXpedition, their task was to study the ways plastics are causing catastrophic harm to the oceans.

This ongoing effort involves teams of women researchers making some 30 sailing journeys over 21 months. Wooten battened down the hatches for the maiden voyage out of Plymouth, England, in October, sailing to the Azores. By the time the eXXpedition is done in 2021, its members will have seen the waters of the Atlantic, the Pacific, the Caribbean and Arctic.

Once Wooten’s thrashed, 70-foot sailing boat made it out of the tail of Hurricane Lorenzo, she was able to start working and take stock of the plastics and microplastics killing ocean life.

“We were almost as far out as we were going to get,” Wooten said. “It’s in the middle of nowhere; yet every day we would see—every day—intact plastic refuse floating by.”

Trained at UC Santa Barbara, Wooten has spent most of her archeological career excavating California’s early ranches and gold mining camps. In August, she was selected to sail on the eXXpedition, serving as an expert who could compare the environmental damage from 70 years of a plastic-centered society to that from other major shifts, such as the Industrial Revolution.

And that damage is great. According to the Center for Biological Diversity, surface-level plastics, microplastics and plastic elements are spreading ever farther across the world’s oceans. It’s a trend that is threatening marine life and ecological systems on unprecedented levels. The center estimates that, at this rate, plastics will outweigh fish in the oceans by 2050.

Four days into their voyage, Wooten’s eXXpedition team was no longer fighting for survival. They were finally able to start trawling the water with a fine mesh. Wooten says they netted 80 pieces of plastic in their very first sample. What they found was later sent to Plymouth University in England for analysis. Wooten recalls finding small jelly fish with microplastics embedded in their bodies.

Since getting back, Wooten has been following numerous reports of large-scale marine life die-offs, including birds, turtles and even whales. Wooten now plans to use her experience to join a chorus of voices demanding policy action around single-use plastics.

“I don’t know what you can say to convince people you have to change your ways,” Wooten said. “And it has to be done right now.”