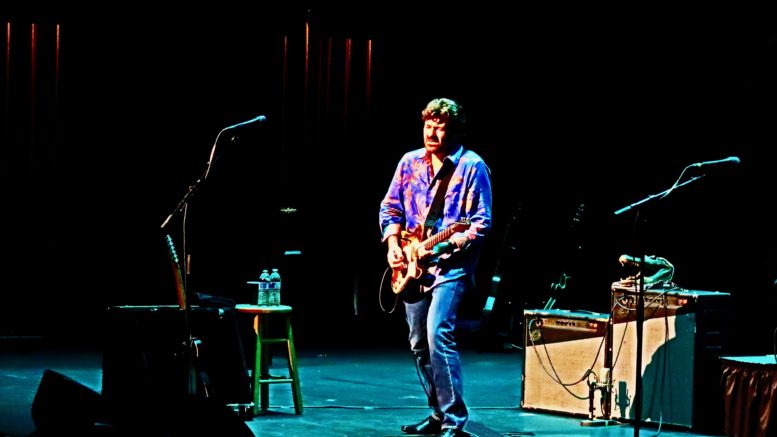 Tab Benoit gets the blues going at the Harris Center on Nov 5. (Photo by Scott Thomas Anderson)

From the Mississippi Delta to the Cajun bayous, the sonic language of the American South continues to be sharpened by the blues. It’s a music that keeps cutting to the center– and into the nation’s soul.

On Nov. 5, one of Louisiana’s best-known bluesmen brought all his rifts and licks from the cypress swamps to Folsom’s Harris Center for the Arts: Tab Benoit has long been seen as guitar-wielding messenger for the vanishing coastal wetlands he grew up in, and as he performed song after song about those cattails and oxbows, he received loud applause from a Sacramento region that’s been struggling to protect its own imperiled delta.

The first half of the night was a showcase for Whiskey Bayou Records, which Benoit recently co-founded, partly as vehicle for musicians from Cajun Country. Event-goes arrived to find Benoit parked behind a drum set rather than brandishing his signature telecaster. The headliner took on percussion duties as songwriter Eric Johanson treated the crowd to his earnest blend of roots-Americana singing and brawny, backwoods guitar grooves.

The combination especially shined when Johanson played “Oh Louisiana,” a track from his new album on Whiskey Bayou, Burn it Down. Benoit stayed on drums as the audience got a set from hard-charging guitarist Eric McFadden, who’s also signed to the label. There’s always been a little devil legend and mystic distortion in the blues, and McFadden played like a man possessed by both legacies.

After intermission, Benoit finally strapped on his guitar. He quickly had fans clinging to every stinging and sterling note, the naked intensity of his string-bending laid bare against the rawboned backing of a two-piece rhythm section. The bluesman then launched into the calm, fervent fire of “New Orleans Ladies.” Between drawn-out, sultry chords and the stormy way Benoit sings it, it’s not hard to see how the song became a favorite in the Crescent City.

During the show, Benoit poured on the southern charm as he kept talking to the audience. At one point, he joked about how different the state-of-the-art and meticulously maintained Harris Center is from those old French Quarter saloons and Baton Rouge honky-tonks he learned to gig in.

“I enjoy hanging out with y’all,” Benoit said. “Especially in this very clean building. I mean, it has the most-neutral smell of any place I’ve ever played at.”

That drew the most laughs of the night.

Near the end, Benoit erupted into his blistering blues apocalypse, “Shelter me.” The guitar’s lashing snarl overtook the theater, the ominous toms and bass stomps rumbling just under Benoit’s scorched-earth vocals. It was another example of a pure, bottom-up style of music that easily resonates from one delta to another.