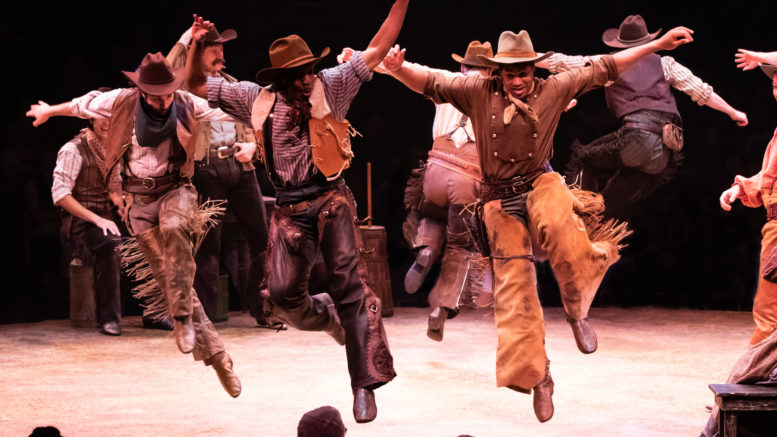 The 1943 Rodgers and Hammerstein show that redefined American musical theater recently won a Tony for the best revival of a musical, but really it has never gone out of popularity in its 75 years.

With familiar songs such as “Oh, What a Beautiful Mornin’” and “People Will Say We’re in Love,” Oklahoma! tells of the courtship of two rival suitors competing for the love of a young girl in 1900s Oklahoma territory.

Emilie Kouatchou is a perky Laurey with a rapturous voice that fills the Wells Fargo Pavilion. Ryan Vasquez, who has toured as the title character in Hamilton, is a commanding Curly. The chemistry between the two is palpable, even when they are fighting.

Brit West is the sex-starved Ado Annie Carnes, her heart set on the peddler Ali Hakim (Jeff Skowron), though not quite over Will Parker (Pierce Cassedy) and willing to get into a few clinches with him as well.

John Rapson is Jud Fry, the universally hated ranch hand, determined to make Laurey his own, in the days before there was a #MeToo movement. His “Lonely Room” is dark, dramatic and a highlight of the evening. Meanwhile, Jennifer Allen’s Aunt Eller is a great comic character, who keeps the peace between the farmers and the cowmen.

This is a lively production with terrific dancing—especially by the tap dancing cowboys—though the moral of the story seems to be that murder is OK if the murderer is likeable, the victim is not, and everyone is waiting for a honeymoon to begin.

Theater of the absurd (lawsuit)