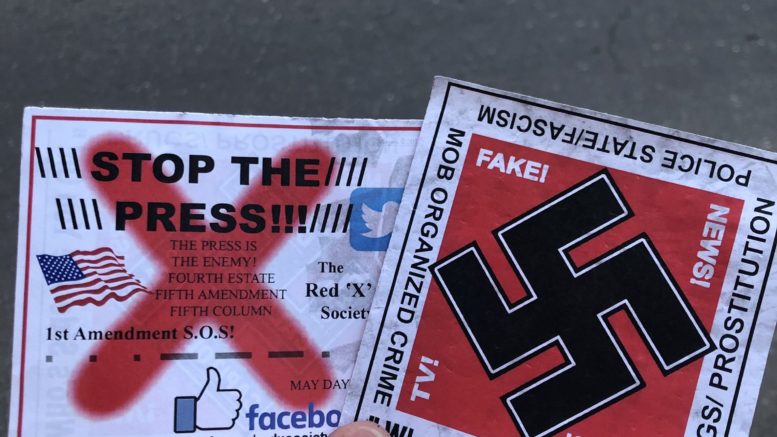 A man who admitted drone-dropping propaganda over Sacramento last week told SN&R he intended it as a subversive act criticizing law enforcement and the media—and that he’d done it before.

Tracy Mapes broke off communication after briefly exchanging Facebook messages on Sunday, but not before acknowledging he was the one who papered Guy West Bridge with inflammatory fliers during a Sacramento State University fundraiser on May 3. The fliers also fell on the Golden One Center during an Ariana Grande concert.

According to photos posted to social media by a student reporter with the State Hornet, the hand-sized leaflets contained messages such as “The Press Is the Enemy!” and “Stop the TV Whore Takeover!” But at least one leaflet was emblazoned with a swastika, with the words “Fake!” “News!” “Papers!” “TV!” inscribed in the far corners.

The swastika flier also contains the line “Whose Side Are You On!”

In a statement issued the night of the leaflet drop, Sac State president Robert S. Nelsen condemned “the dissemination of hate speech and propaganda.”

“The anonymous act of spreading such vile material is offensive and runs counter to the principles of inclusion and diversity practiced at Sac State,” the statement continued. “It did not stop the event, nor will it slow our march toward greater understanding and commitment to the rights and safety of our campus community.”

Reached via Facebook Messenger on Sunday, Mapes told SN&R he delivered the same material to local media offices two years ago, including SN&R’s. An SN&R employee found a flier outside about a month ago.

“I’m equating the Media and Local ‘Dirty’ Law-Enforcement with being Nazis. And involvement with the subversion of an entire Nation,” he wrote. “Are you ready to play in the Major Leagues? Or are you just some college punk that thinks he’s got all the answers?”

Whatever Mapes’ intended message, colleges are being infiltrated with far-right propaganda.

At least two posters proclaiming “It’s okay to be white” were found at American River College in November, The Sacramento Bee reported. And a group calling itself the American Identity Movement has targeted numerous campuses with xenophobic literature, including Sac State on Monday, according to the group’s Twitter page.

Until recently, AIC was known as Identity Evropa, according to the Southern Poverty Law Center. I.E. and its leader Patrick Casey are currently facing a lawsuit in connection to the deadly 2017 “Unite the Right” rally in Charlottesville, Va., which the group helped organize.

AIM’s modus operandi is to spam colleges with race-baiting slogans such as “Diversity Destroys Nations” and “Nationalism Not Globalism.” The agitprop masks an even darker mission, the Southern Poverty Law Center states, and is “simply a cover for rampant racism and antisemitism.”

“More than any other white nationalist group operating today, Identity Evropa has attempted to frame their views in ways that appeal to mainstream conservative audiences,” SPLC reported in March, following private chat leaks revealing a deep neo-Nazi undercurrent in the group. “The thorough management of their image is all part of an attempt to cozy up to the Republican Party and, they hope, eventually alter the GOP to fit their own image.”

In an emailed statement, Sac State spokeswoman Anita Fitzhugh said the administration was aware “a white supremacy group” had disseminated fliers in violation of university policy and encouraged people to report them “so they can be removed immediately.”

By contrast, Mapes seems to fancy himself some sort of antiauthoritarian provocateur. He wrote that he was a freelance reporter in Sacramento between 1995 and 2005, until he was “run out of the business” for exposing the “truth.”

Los Rios Community College District spokesman Gabe Ross confirmed that a student by Mapes’ name is enrolled at American River College. In an emailed statement, ARC spokesman Scott Crow said the college joined Sac State in condemning what he described as a “hate speech incident” and “any attack on journalism, which is more important than ever today.”

“The college is investigating this matter, and while we will not comment on any disciplinary action against specific student(s), our policy does state that any student found to be involved in criminal or illegal activity off campus can be subject to disciplinary measures through the college’s Office of Student Conduct,” Crow’s statement added.

Mapes’ Facebook page also says he works for the “Red ‘X’ Society,” which describes itself as a members-only “Non-Associative Organization” with the goal of “Exposing US Corruption.” A Tracy Michael Mapes is listed as the group’s founder.

Mapes is currently being prosecuted for misdemeanor vandalism in connection to an incident that occurred in Sacramento County on or before April 2018, according to online court records. He’s next due in Sacramento Superior Court on June 6, when a psychiatric evaluation could determine if he’s mentally competent to stand trial.

They wanted to join the force. They died trying.

Be the first to comment on "White supremacists are trying to recruit college kids, but it’s not the guy you think"