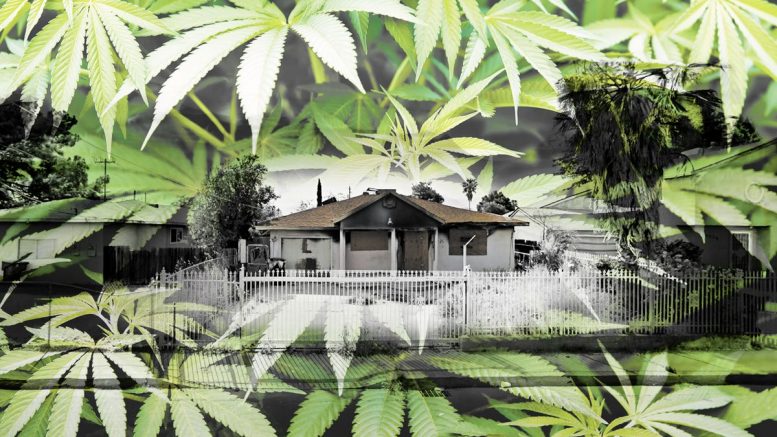 When federal agents finally looked inside the Cadillac, they saw multiple house keys, four garage door openers and $10,000 in cash sitting in the center console. At a glance, it might look like a typical drug dealer’s ride. But there was nothing typical about the car’s story.

It was parked in front of a driveway on Itasca Avenue, an upscale section of the Natomas neighborhood lined with Tuscan-style track homes. Inside the residence, agents found more than marijuana plants: pay ledgers, receipts and watering schedules written in Chinese, plus a number of suspicious bank statements and another $10,000 in cash, some of it hidden under a mattress. That day, federal agents also raided a secluded farm house the Cadillac had been spotted at, one half-hidden in the open fields outside Wilton. During the search, they found two men—Chengchun Xie and Zohngzhang Yang—hiding in a closet and the attic.

It was September 14, 2016. According to affidavits from the Drug Enforcement Administration, the discovery was part of the early stages of a three-year investigation into more than nearly 100 black market grow houses from Sacramento to the rural Gold Country, some of which were financed by laundered money from China. As the probe deepened, the agents allegedly uncovered straw buyers spread across the country, evidence of labor trafficking and a licensed real estate agent in Elk Grove allegedly arranging fraudulent home sales.

The operation soon involved the DEA, FBI and IRS tracing money that flowed into Sacramento’s illegal grow houses from banks as far away as Beijing and Shanghai.

At least three foreign-influenced “cells” were broken up, the latest arrests coming in December.

As tax revenues from legal, regulated marijuana in California continue to fall far short of expectations, regulators across the state are worried that the prevalence of illicit markets are crushing opportunities for legal growers trying to do legitimate business. The DEA’s sophisticated take-down of the China-connected cells is now shedding light on just how dark those black markets can be.

“It’s incredibly unique,” DEA Special Agent in Charge Chris Nielson said of Chinese cash flows. “We just hadn’t had a lot of experiences in Northern California like that. This idea of foreign money in grow houses isn’t new, but we had not seen it in our area from China.”

The September 2016 raids also hit five houses in South Sacramento. All were allegedly under the control of 39-year-old Leonard Yang, who emigrated to the United States from China in 1993, according to a federal search warrant affidavit and asset forfeiture filings reviewed by SN&R. Charging documents claim Yang had been running a Hong Kong-style restaurant in Columbus, Ohio until 2012, when he moved to Sacramento and started buying up properties.

During the first raids, federal agents found Yang inside the Natomas house his Cadillac was parked near. He was put in handcuffs and taken to the DEA’s Sacramento district office on Watt Avenue. Once there, Special Agent Brian Swenson noticed Yang was bleeding from his mouth.

“Leonard Yang stated that he was arrested by police that morning and had been put on the ground, which caused the injury,” Swenson wrote in the affidavit. “Yang stated he had minor pain from the injury and was OK to talk.”

And talk he did, according to Swenson’s report. Yang waived his rights to a lawyer and, with the assistance of a Mandarin interpreter, began telling his story. Yang denied having knowledge of many of the South Sacramento houses where the DEA served warrants. What Yang didn’t know was that DEA agents had put a tracking device on his Cadillac prior to their operation. They allegedly monitored him driving to all seven of the properties.

“Which is common of marijuana cultivators who are busy checking and maintaining their marijuana grows,” Swenson wrote.

While that part of Yang’s story wasn’t surprising—nor was his alarming, industrial-level use of electricity at the houses—there were aspects of his mini-grow empire that were unusual. Swenson’s team eventually learned that tens of thousands of dollars used for down payments on Yang’s properties had been wired from China.

Yang has pleaded guilty to two felony counts of illegal manufacturing of marijuana and is awaiting sentencing in federal court.

As the months passed, the DEA followed Yang’s trail of investors until it unmasked a second alleged cell. Agents contend the new ring was partly led by Xiu Ping Li and involved nine properties in Sacramento County.

One of the houses, located on Suarez Way in Elk Grove, had been purchased under the name of Li’s 25-year-old niece, Yan Bing Li. The price tag was $416,00. But when agents probed further, they discovered that the niece was working at the Hibachi Grill & Buffet in Houston, earning just $13,000 a year.

The paper trail allegedly showed that $48,944 of the $175,700 deposited into the house’s escrow account was wired to a co-conspirator’s account from the Agricultural Bank of China, one of the Republic of China’s “big four” financial institutions.

Li has pleaded not guilty and is awaiting trial.

By July 2017, the DEA was working with the Yuba County Sheriff’s Office to investigate a third group running illegal grow houses, in this case on nine properties between Marysville and the western edge of Sacramento County. One of those houses, on Sutton Pointe Court in Elk Grove, was purchased with money wired from the Industrial and Commercial Bank of China, the largest bank in the country. That investigation led to the owner of the homes, Zhen Shang Lin, being arrested, as well as Elk Grove real estate agent Heidi Phong.

Phong was the licensed officer for HP Real Estate and Skye Investment LLC.

“Phong represented buyers of residential real estate … who intended to convert these houses to indoor marijuana cultivation sites,” federal prosecutors wrote in their indictment. “Phong and her co-conspirators often arranged for the financing of these homes through ’hard money’ lenders to lessen the chance of detection, as these lenders did not have the same level of review used by traditional banks to ensure legitimate income.”

One of the purchases Phong allegedly arranged was in the foothill hamlet of Fiddletown.

Lin and Phong have pleaded not guilty and are currently awaiting trial.

Nielson said how cash from illicit marijuana sales is moving back to China and to whom is still under investigation.

On April 10, stakeholders in California’s cannabis industry held a postmortem of sorts in the Elks Tower ballroom. One of the evening’s topics involved whether high taxes for legal marijuana caused the revenues to fall short.

Since January 1, the state Franchise Tax Board has collected $471 million—$159 million less than projected. According to the Los Angeles Times, that makes California one of the lowest performing states of the nine that regulate recreational marijuana.

Regulators at the conference discussed the impact of a widespread black market on legal growers.

Amanda Ostrowitz, founder and CEO of CannaRegs, moderated the discussion and encouraged attendees to be frank with their assessments. Another speaker was Ethan Turner, deputy counsel for Calaveras County, which famously sanctioned marijuana under one board of supervisors, then banned it under another and is now engaged in a political tug-of-war. Turner told SN&R that even if Calaveras allows legal sales, black market operations will remain a challenge.

“We know from aerial surveillance that there are over 1,000 illegal grows in Calaveras County,” Turner said. “In terms of the indoor grows, what our code enforcement is finding is that these people will split, and the houses they leave behind are so infested with black mold that they’re totally uninhabitable.”

At least one of the houses Leonard Yang converted, on Sacramento’s Logan Street, has since been torn down. The alleged cells also took 100 semi-affordable houses off the market in the midst of the region’s worst housing crisis in years.

Nielson, who has his concerns about California’s legal cannabis industry, nonetheless believes the work his agents did to interdict the China-connected black market was worth the years of hard work.

“To me, the big advantage of what we did was giving the neighborhoods back to the people,” he said. “And saying to these foreign entities that might be watching Sacramento that it’s not a good idea to come here and buy a hundred houses. We’ll shut it down, and they’ll lose a lot of money.”

Be the first to comment on "The Chinese connection"