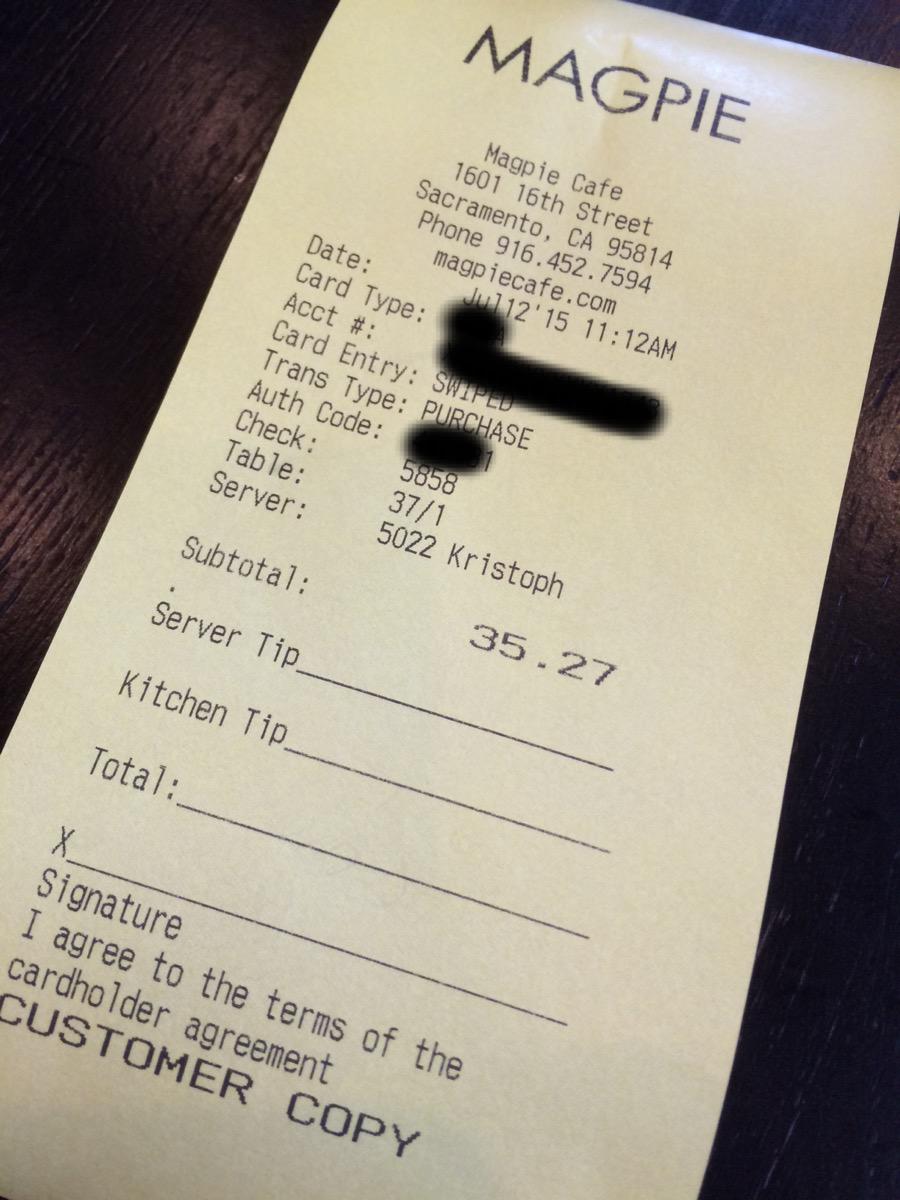 Social media maven Thomas Dodson posted a photo of his recent Magpie receipt to his various networks, and it showed two separate tipping lines: one for the server, one for the kitchen.

Folks started chiming in: does that mean we’re supposed to tip 20 percent for both? or divide up a 20 percent tip between them? who is supposed to get more, or is it equal? does kitchen staff not earn enough money otherwise?

Kitchen staff—the line cooks, the dish washers, the prep cooks, not the executive chef or sous chef—usually earn less than servers post-tips. That’s why there’s sometimes animosity between the back of the house and front of the house. At some restaurants, tips are pooled so kitchen staff gets a cut, but that’s not always the case.

Magpie owner Ed Roehr clarified the new tipping policy via Facebook today: “We certainly don’t want this to be a big deal for the guest and we don’t want to double charge anyone. We just added a space to say that if you feel it, give a few bucks to the kitchen. If you don’t feel it then don’t do it. No sweat.”

Checks are supposed to come with a yellow slip explaining the kitchen tip line–Dodson perhaps didn’t receive one or didn’t notice it. In Roehr’s words, the slip tries to do the following:

1- To inform guests that there is no obligation. All tipping is voluntary
2- To show our guests that you don’t have to tip more in order to participate
3- To demonstrate that tipping this way doesn’t end the culture of tipping as we know it and that it doesn’t have to have a material effect on the food server (we don’t want to hurt our waiters!!)
4- To give our guests the chance to acknowledge culinary professionals on our staff in a meaningful way.

OK, so that doesn’t completely clarify how much the server and kitchen should be tipped after a satisfactory experience.

Last year, Los Angeles restaurant Alimento also implemented a separate kitchen tip line—a move received with national media attention. At the time, it was more shocking than abolishing tipping altogether, like many Bay Area restaurants have done. According to Alimento chef Zach Pollack, tips for the kitchen were ranging from 1.5 to 4.5 percent.

“Sacramento is America’s “Farm to Fork Capital”, and for Magpie we see that our role is to build a robust business model that reflects the values of local, seasonal and sustainability… We feel this modest modification will make us a better restaurant, for the guests, the team and for the quality of the food.