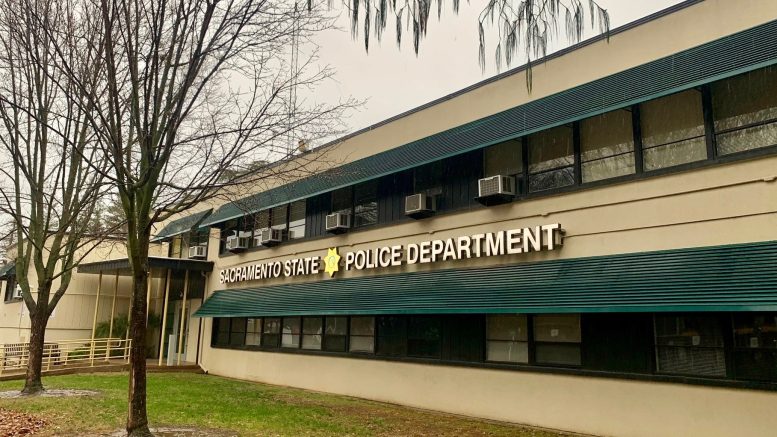 By Angela Rodriguez and Elizabeth Meza

California is implementing a new law that could change how police respond to mental health crises on California State University campuses: Now, Sacramento students and campus officers are weighing in on the possibilities.

AB1997 requires the Chancellor of the CSU to create a stakeholder group to develop alternative options to current policing. The law endorses trauma-informed crisis response teams on each campus that can respond to noncriminal incidents separately from campus police departments and local law enforcement.

The bill’s author, Compton Assemblyman Mike Gipson, said, “For our youth to reach their fullest potential, it is absolutely necessary that we create a safe and healthy environment for them to do so.”

Gipson, a former police officer himself, added that it’s important for campuses to have trained mental health specialists whose job it will be to focus on dispute resolution and transformative justice. “These trauma-informed crisis response teams would be available at every CSU campus and would respond to noncriminal health and safety incidents, such as classroom disruptions and interpersonal conflicts,” he asserted.

There has been growing concern over police responding to mental health crisis situations. Chris Cox, a sociology professor at San Jose State and the California Faculty Association associate vice president for the Council of Racial and Social Justice, said that AB1997 seeks to solve campus issues without armed law enforcement.

“Sometimes we have challenges with mental health, and the presence of armed officers doesn’t solve the problem,” Cox explained. “Sometimes it can exacerbate the problem. Oftentimes it can result in violence or safety concerns for officers and the person in distress. We need other ways to address problems other than the reliance of armed police.”

Cox noted that all stakeholders, including faculty, staff, students, campus health and safety personnel, and bargaining-unit representatives, will generate ideas on how to create alternatives for campus safety and support.

“We can’t keep trying to deal with problems the same way over and over with the same result,” Cox stressed, pointing out that AB1997 is meant to introduce new solutions to create safe campus communities with student input. He said the ideas generated during the effort could influence other public university systems.

“The open mindedness of students and willingness to see the world in a different lens is our biggest strength,” Cox said.

“The problem is that we sometimes don’t know,” Madison observed. “What is being called into our dispatch is one thing but when we go on scene it could be something different. Having us nearby can be beneficial.”

Madison also explained that welfare check calls are regularly received by the police department, especially now that the campus is more populated since the pandemic. He understands that some students may not want police on campus, but he disagrees with anyone suggesting the total eradication of the campus police department.

“The campus police is an integral part of the community partnership on campus,” Madison countered. “We have a significant number of students that want us on campus … We’re very open to having a social worker embedded with us and us working collaboratively with a social worker so that the students get the best service available.”

AB 1997 calls on the crisis response team to be trained in dispute resolution and restorative justice. According to the San Francisco District Attorney’s Office, restorative justice is an approach that focuses on examining who is harmed when a crime has been committed and determining ways to repair the harm.

“This kind of thing outside of traditional criminal legal processes often turns out to be healing for the person harmed and holds people accountable for harms that they cause,” Sardina said.

Sardina, who facilitates restorative justice processes, said that overreliance on police is not going to provide a safe campus for everyone.

“Police officers are not trained to deal with mental health crises,” the professor said. “Some police departments have started to pair social workers with officers when they go on these calls because they are not equipped to deal with that type of situation.”

Sardina hopes the crisis response team will have a committee that provides oversight to ensure that they are effective.

“The community is asking for alternative ways to heal and address the harms occurring on campus,” Sardina continued. “The amount of money that went towards mental health counseling versus policing is upsetting, quite frankly.”

Sardina is optimistic that AB 1997 could bring about positive change and more support for restorative justice solutions.

Students for Quality Education intern and Sacramento State student Lillyana Sanchez said that she is in full support of this bill because it will promote community on campus.

“Creating groups like this with multiple perspectives and letting the community work on these issues creates a solution that would not only help so many students suffering but also reduce the need for police on campus.” Sanchez said.

Though Sanchez is against police responding to mental health crisis situations, she is not for abolishing police on campus because there would be no way for students to defend themselves in emergency situations. She does want the new law to put more focus on mental health workers since, in her view, they’re more capable of handling such situations then campus police.

“My hope is that when students are really suffering, they can call and get immediate support so they aren’t alone,” Sanchez reflected. “I just want students to be safe physically and mentally. This is a good step in that direction.”

Be the first to comment on "Sac State preps for a different take on campus policing, mental health support and restorative justice"