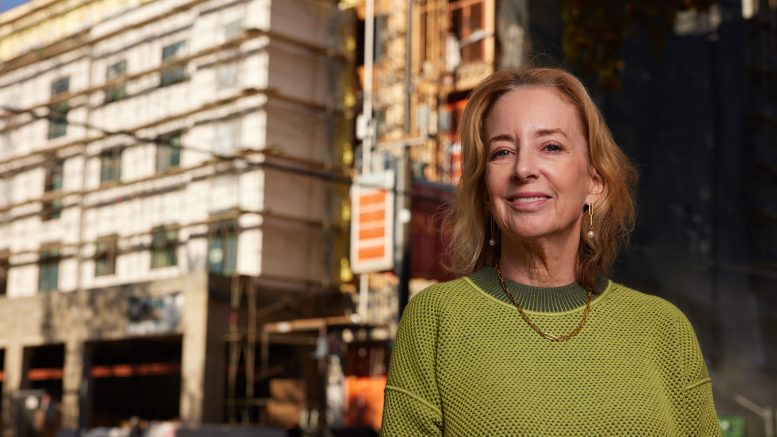 Wendy Saunders, executive director of CADA photographed in front of affordable houising being built along S St between 17th and 18th in Sacramento November 15, 2022. Photo by Fred Greaves

Wendy Saunders has helmed the Sacramento-based Capitol Area Development Authority as executive director since 2013. She recently announced that she would retire at the end of this year.

Founded in 1978, CADA is a public agency that creates new urban infill housing, and manages residential and commercial properties owned by the state. CADA manages roughly 730 rental housing units, and about 25 percent of these are affordable to low and very low-income households.

We spoke with Saunders recently about some new affordable housing projects that CADA has in the works.

Describe what CADA does, and its mission relative to the affordable housing deficit in the Sacramento region.

CADA manages, on behalf of the State of California, about 730 rental-housing units in Sacramento’s downtown and Midtown areas. We have two projects under construction now that will open shortly after the new year. One has 159 units at 17th and S streets called ARY Place. Those are all affordable units. The second and smaller project is 58 affordable micro-units [275-square-feet with minimal fridges, kitchens and foldout, or Murphy, beds] between 13th and O Streets, [called The Courtyard Sonrisa] on state-owned property leased to CADA for $1 a year under Gov. Newsom’s Executive Order N-06-19.

Historically, CADA has primarily managed a property portfolio on behalf of the state and serves as a conduit between private development entities [investment capital] and the State of California for its excess, idle parcels of land. More recently, because of Sacramento’s dire need for affordable housing, CADA has devoted more time and resources to building new, affordable rental units, which are in short supply.

What do you see as the major factors driving the housing crisis in the Sacramento region?

The same supply problem plagues the country and California and our region after the housing recession of late 2007 to mid-2009. That set the stage for a residential building slowdown. We are radically behind in that housing supply. Catching up to the demand is a challenge. That equation increases prices.

What do you see as the most promising solutions to Sacramento’s lack of affordable housing?

Increasing the supply. I think that Gov. Newsom has done a couple of good things here, such as his executive order making unused state-owned land parcels available to construct affordable housing, enacted before the pandemic of 2020, and funding California state tax credits. The wheels of bureaucracy turn slowly, but the state is moving forward aggressively.

At 805 R Street, CADA and Mutual Housing California are moving forward on a planned project for 242 affordable housing units. Our mission is to build as much as we can as fast as possible, though this does not happen overnight, due to the nature of the building and financing processes. Nothing moves fast enough in construction of affordable and available housing.

What is the model for CADA’s affordable micro-unit project at 13th and O Street?

We looked to the successful micro-units in the apartment building at 19th and J Streets in Sacramento for many good ideas. We also learned much from Patrick Kennedy [Panoramic Interests San Francisco], a pioneer of smart-growth principles in land development, including micro-units. Finally, ULI [Urban Land Institute] has published a number of articles on micro-units that were helpful.

What can you tell us about the solutions you have shared and why they offer the most potential to solve the problem of housing affordability and availability?

The more affordable housing built the better. Its placement in urban centers will allow people to use public transit versus highway investments. The latter creates pollution problems that will be with us for a long time.

What limitations exist around these solutions to the supply issues of affordable housing discussed? For example, after building affordable housing, say potential renters are unable to afford the price. For example, a recent University of Chicago study found that 53% of people living in homeless shelters and 40% of unhoused people worked for wages.

The project at 805 R Street will include 30 rental units for people trying to transition out of homelessness. I think that a specific California problem is the dismantling of the public mental health hospital system 40 years ago under then-Gov. Reagan. That decision eliminated housing for people requiring mental health services. Nothing has replaced it, aggravating the statewide crisis of housing affordability and availability. That is more than a supply problem; it is also a problem of not having systems in place for people who suffer from mental health issues.

Meanwhile, as CADA works to expand the supply of affordable housing for low-income people,

homelessness has grown, exacerbated by the use of more and more virulent drugs, such as opioids. These are related problems.