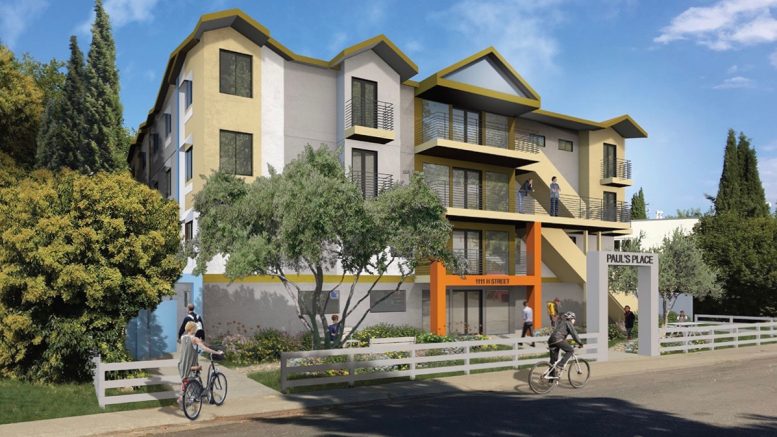 An innovative Davis project, set to open early next year, will be the first of its kind: a vertical tiny home village that will provide shelter to dozens of unhoused individuals, while offering an array of supportive services.

The Paul’s Place venture is a partnership with the nonprofit Davis Community Meals and Housing, and the Central Valley chapter of the American Institute of Architects. It will provide services to individuals with a wide range of needs — from crisis, transition to permanent housing.

Organizers believe that Paul’s Place, at 1111 H St., will serve as a model that can be replicated across California and the United States. It is named after the father of Bill Pride, executive director of Davis Community Meals and Housing. Paul Pride, who died in 2003 at age 77, proved “that everyone has the ability to change,” his son said.

While giving a tour of the construction site in mid-November, Bill Pride said he doesn’t know of a project like Paul’s Place anywhere. “This is the first place where you’ve actually combined three kinds of separate things all in one building.”

Brian Fenty, chief building officer for the City of Davis, said the structure was designed to address common obstacles, making it a prototype for future projects. “The codes are the same throughout the state, so Paul’s Place really can serve as a model for other communities. It’s replicable and scalable.”

All services in one place

The second floor of transitional housing is where most clients will start living. It has 10 single-occupant bedrooms with a shared kitchen, laundry, living room and five bathrooms. There are two staff offices, and a staff bedroom with half-bath.

The third and fourth floors are the final step, with 18 single-occupant permanent supportive studio apartments, each 300 square feet, with a central gathering space. There is an elevator as well as stairs, and each floor has Americans with Disabilities Act-compliant facilities.

The first two floors — supportive services and transitional housing — are scheduled to open in mid-January. The third and fourth floors — permanent supportive housing units — should follow around March 1.

Paul’s Place Spokeswoman Carri Ziegler said the project is a rare combination of all services that are on the continuum of care. “The goal is to make it a best practice. This is a local, collective solution to a national problem,” Ziegler said. “It fits into a community and enhances it.”

Pride said others could simplify the project by copying just the studio apartments: four stories for 36 units. “If you could get three or four of those buildings in Davis, you could almost get all of the homeless folks off the streets.”

Nationally recognized architect Maria Ogrydziak started donating her time in 2016 toward a permanent solution to Davis homelessness. She designed Paul’s Place. “Communities in our region are all looking at what to do about the problem of homelessness,” Ogrydziak said. “I’ve gone to see places and I just don’t understand why the solutions can’t be better.”

She toured tent cities and 8-foot-square sleeping cabins in Sacramento “but they still have to walk outside to use the bathroom. Make the solution livable and positive. That’s what this building is about.”

Ogrydziak said one of her biggest challenges with the project was describing it. “It’s really a prototype. It’s one of a kind. It’s hard to explain something that doesn’t exist yet.”

She added that tiny house villages take up valuable land. Paul’s Place is on two residential lots that face railroad tracks. The site previously had two small houses it used as a 16-bed transitional shelter — cramming four people per room. The new shelter doubles the housing but amplifies the impact with the other services.

The architect planned this without exceeding height or setback limits. “I followed exactly what was allowed for in the zoning.” There was little opposition.

Pride said the design’s intent is to bring people off the streets, get them the help they need on the first floor, and move them upstairs as they progress. Clients receive case managers, treatment for mental health and addiction, and connection to state and national services so they can move out. Staff members work and reside on the first two floors, offering help and ensuring residents follow rules like no visitors or smoking.

It’s designed for singles; DCMH has other, larger housing programs in town for couples and families. And contrary to popular belief, most occupants come from this well-heeled university town.

It’s a solution that’s not without its issues, Pride said. In the last decade, the U.S. Department of Housing and Urban Development eliminated funding for transitional housing, choosing to focus on permanent housing that doesn’t limit length of stay. Clients who live on the second floor of Paul’s Place will have to move to permanent housing within 18 months. The top two floors do not have a time limit, but the units are so small it would be difficult to live there comfortably, long-term.

“You have to have various ways for folks to move through the system to end up at a place where they are housed and self-sufficient and back being part of the community again,” Pride said. “I don’t think one solution fits for all, frankly. I like the idea of having different ways to have folks navigate themselves to being back in the community.”

Local hoteliers Reed and Susan Youmans paid for the feasibility study to see if there was sufficient community support for Paul’s Place, then led the fundraising effort; Partnership Health Plan provided a $750,000 grant; Ogrydziak designed it; hundreds of Davis residents, businesses and organizations contributed financially; and Sutter Health provided a $2.5 million matching grant for the $5 million project. Since most of it was privately funded, there were fewer limitations on how the money was used.

“When you look around the country at what’s being done on this kind of issue, a lot is being done that’s not as good ­— for much more money,” Ogrydziak said. Pride noted that supportive housing projects in Los Angeles average about $1 million per unit, where this one was less than $200,000.

Ogrydziak lives and works in downtown Davis, and has seen the unhoused population multiply in recent years.

“We all need a home, a place where we feel that we won’t be chased away. It’s really horrible how many people haven’t found their way to have a home in some fashion,” she said. “And downtown, so much has changed. … I’m really proud that the people in Davis were able to do this, because it’s really important. Davis families need this too.”