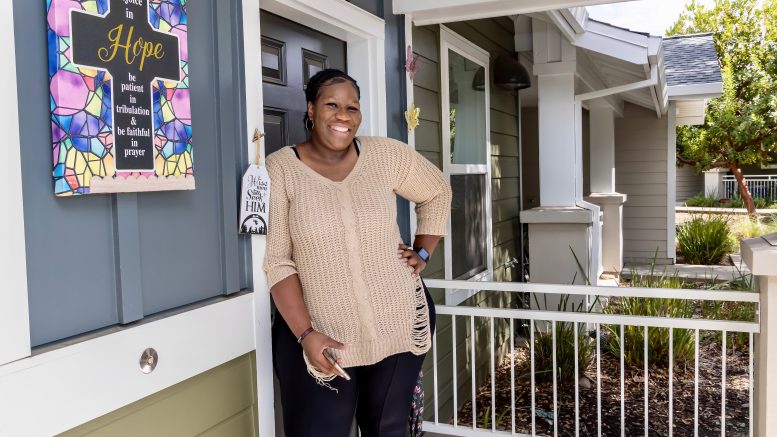 Ashley Clark has found Folsom Oaks an inviting place while attending church and helping neighbors support each other. Photograph by Joan Cusick

Story and photographs by Joan Cusick

Before securing affordable housing, artist Jose DiGregorio was sleeping in his art studio. Charnelle Burdine and Ashley Clark were living on the streets. Jessie Ann Wagster and her 15-year-old chihuahua, Jake, were living “day to day” out of her car.

But gaining a safe and affordable place to live — with rent capped at 30% of their gross income — turned their lives around.

“I was sleeping in my studio at Verge Center for the Arts, which you’re not supposed to do,” DiGregorio says of the art studio in Southside Park. “But I was actually setting the alarm, signing myself out as if I was leaving, and then running back into the studio before I tripped the alarm and staying in there for the night. It was there that I received a phone call saying I was approved for a three-bedroom [apartment], and I started sobbing. I couldn’t even speak. I mean, I couldn’t believe it.”

DiGregorio and his two daughters have lived at the Warehouse Artist Lofts ever since it opened on R Street in Sacramento eight years ago as an affordable community for artists. Shared spaces are filled with art — including an original mural by DiGregorio — to encourage creativity and collaboration.

Other affordable housing communities serve various low-income populations. Lavender Courtyard, for example, opened in Midtown Sacramento in the spring as home to a diverse group of seniors, including those from the LGBTQ community. The demand was so high that Mutual Housing California, the owner and manager, held a lottery to select residents from the hundreds who applied.

“I really did hit the lottery,” says resident Jessie Wagster. “This place changed my life around. I love everything about it.”

“We remind people that affordable housing is for families and veterans and seniors and artists and anyone else who needs a little help with the high cost of rent in our area,” says SHA Executive Director Kendra Lewis. “At the end of the day, these people get to come home and close the door behind them. … I think so much about what that door means to them, and I worry that we should have 10 times more doors ready.”

Some new communities are underway. Community HousingWorks of San Diego plans to open two apartment buildings on Arden Way next to the Royal Oaks transit center in a family-friendly development called The Salvator. Also in Sacramento, Mutual Housing is developing another senior community near the rail yards, at 7th and F streets. And Hope Cooperative plans to move 47 families into Sunrise Pointe in Citrus Heights before the end of the year.

Hope Cooperative already manages the 19-unit Folsom Oaks Apartments, where neighbors Charnelle Burdine and Ashley Clark live in three-bedroom units. Before coming there, both women were living on the streets. But Hope Cooperative connected them to the services they needed — including health services, job skills and life skills — so they could get back on their feet. Now, they have reunited with their children and are active members of a local church.

“I think what we’re most proud of is the different kind of environment these kids are growing up in,” says Hope Cooperative CEO Erin Johansen. “Most of the folks we serve have spent time homeless, have not had their children for periods of time. What’s great here is they’re in this lovely neighborhood in Folsom. Their kids go to great schools. They grow up here and they break the cycle of poverty. They break the cycle of homelessness.”

But not everyone in affordable housing comes from the streets. Residents include working families, seniors on fixed income and many others who meet state and federal income guidelines — roughly 60% or less of the area median income.

Patricia Jordan moved to Land Park Woods about 13 years ago from another affordable housing community, which wouldn’t let her granddaughter live with her. The granddaughter is now grown, and Jordan has downsized from a two-bedroom unit to a one-bedroom in the gated community.

“When I first moved here, it wasn’t owned by Mercy Housing,” she recalls. “But when Mercy moved in, I was overjoyed. I saw improvement, and that affected the moods of the people around me. We were getting renewed, and that’s how we felt — renewed.”

Jordan has battled heart problems and breast cancer since moving to Land Park Woods, but she is grateful to be part of a community. “I may be alone, but I don’t feel by myself,” she says. “It’s quiet and peaceful, and everybody looks out for each other.”

Be the first to comment on "In the Sacramento area, when affordable housing is done well, it changes lives"