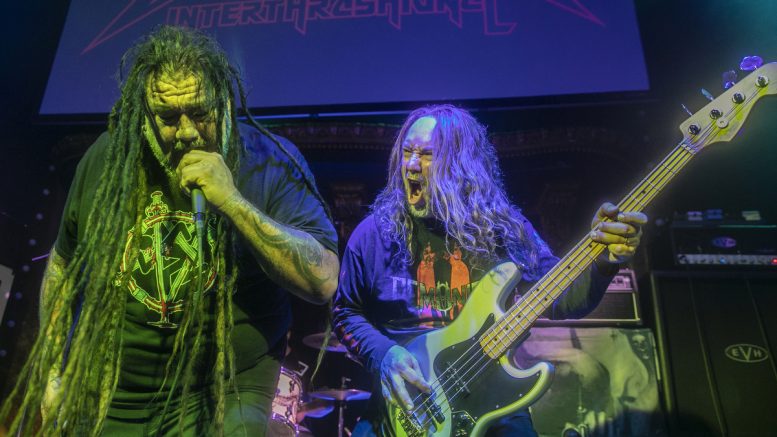 Those lucky enough to catch the Bay Area Interthrashional’s first U.S. appearance last Saturday watched a ton of talent grace it stage, even if band members from Exodus, Possessed and Slayer were sorely missed.

Originally the idea of guitarist/bandleader Craig Locicero (Forbidden, Dress the Dead, The Boneless Ones, Man Made God, Spiral Arms), the thrash-collective was able to play the prestigious Dynamo Metalfest in Holland earlier this year and received heaping amounts of praise from fans and critics alike. Because of the serendipitous timing and many other acts playing in the area, BAI also showcased performances that included Randy Blythe (Lamb Of God), Phil Demmel (Vio-Lence), Katon W. De Pena (Hirax), Kayla Dixon (Dress the Dead and Witch Mountain) – all in addition to the collective’s core players.

Although confirmed for months, Interthrashional’s sold-out show at the Great American Music Hall felt like a homecoming as members of countless Bay Area bands showed up for their longtime followers. Some attendees noted it was their first live concert since the pre-COVID days.

Drummer Will Carroll – a.k.a. DJ Bleeding Priest – spun some of the best heavy metal fare, ranging from popular to obscure while kicking the night off. Later, one of the many stage ensembles launched into the Stormtroopers Of Death classic “March Of The S.O.D.,” which incited a circle pit and feeding frenzy.

The night’s music was divided into three sets: American heavy metal, International and Bay Area Thrash, bringing something for everyone. Members of Sacrilege B.C., Death Angel, Defiance, Hatriot, Hellfire, Warbringer and Demonica all contributed to a tune or more. With a set list of 38 songs that utilized nearly 60 players, the Bay Area Interthrashional collective pulled off a four-plus-hour feat that few in metal world had seen before.

Highlights of the night included a stellar version of Metallica’s “Phantom Lord,” along with Savatage’s “Sirens,” which was fronted by Sacramento’s own Norman Skinner III.

This writer’s favorites of the night included Craig Locicero and company crushing Voivod’s song of the same name, as well as Death Angel drummer Will Carroll fronting a truly all-star band for Celtic Frost’s “Into Crypts Of Rays” and “Procreation Of The Wicked.” Both songs were played at perfect tempo, replete with all the Tom G. Warrior’s mannerisms.

Keeping the festivities light-hearted and Halloween-themed, there was even a costume contest for late Metallica bassist Cliff Burton and late Exodus singer Paul Baloff. Each of the lucky winners received an autographed guitar.

Only one question remains: When is the next one, guys?