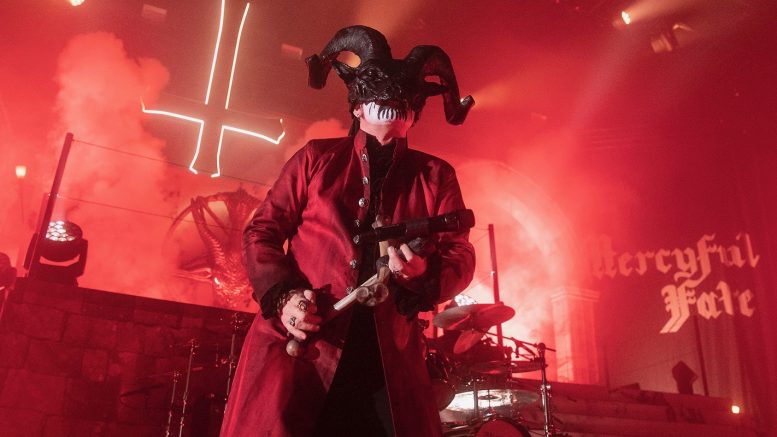 For the 2,500-plus heavy metal heads that made the sojourn to Wheatland’s newest music venue, Hard Rock Live, few in attendance would say they didn’t get their money’s worth.

Mercyful Fate’s show there on October 30 was one of the area’s most-anticipated events since it was first announced; and while the band skipped the Bay Area to play in Sacramento’s greater market, plenty of fans from San Francisco made the trek to Wheatland’s open range.

For the uninitiated, the Danish group was formed in 1981 and took the metal world by storm as it featured a lead singer calling himself King Diamond (his real name is Kim Bendix Peterson). The king sings in a falsetto and wears white corpse makeup ala Kiss yet with decidedly satanic overtones.

From the eerie and unsettling intro of “The Oath” to the show closing “Satan’s Fall,” fans were treated to songs solely from the band’s first three commercial recordings. One exception to that was a new song, “The Jackal of Salzburg,” which still received a rousing applause.

Highlights of Mercyful Fate’s performance included “A Dangerous Meeting,” “Melissa,” “A Corpse Without Soul,” as well as a revved-up version of “Evil.” Although the group has released more records beyond the ones that those songs appear on, it was clear they’d come up with a set list to resonate with longtime fans.

The band’s over-the-top production was as sinister as its music, featuring two, heaving staircases, an upside down cross and a pentagram insignia. A changing background highlighted different songs blasting through the speakers.

As for the live sound, the band’s mix was unparalleled, which only augmented the near-perfect execution of its older material. And while it may have taken more than two decades for Mercyful Fate to play live again, fans can expect a new album in 2023 – one preceded by yet another King Diamond solo release.