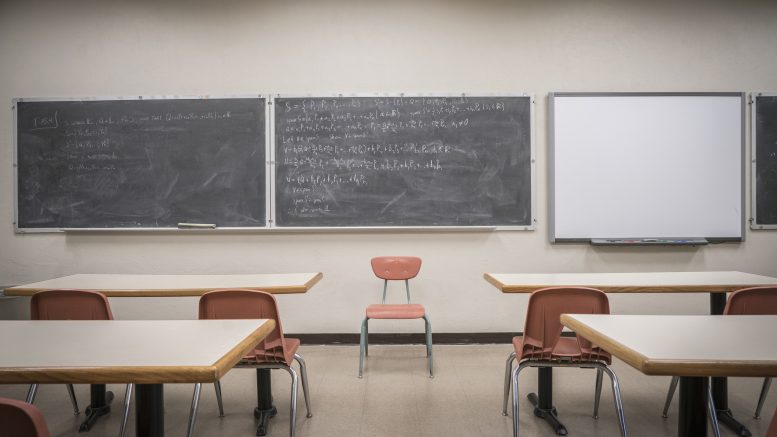 A new poll of teachers sounds a red alert for public education in the state.

A huge California teacher survey has just been released, but Salina Gray didn’t need to see the results. She’s living them.

Gray, who teaches science to seventh and eighth graders in Moreno Valley near Riverside, hears colleagues eagerly counting down the days to their retirement. The Stanford PhD has seen her peers stretched sometimes to emotional breaking points, stressed from their workloads and trying to adapt to a rapidly changing teaching environment.

“Just today someone said to me, ‘These kids are not the same. They’re not as capable. They spend way too much time on social media,’” Gray said. “But really, everyone is just stretched very thin, and it leads to this kind of malaise that some teachers have.”

That sentiment is reflected in the responses of more than 4,600 members of the California Teachers Association (CTA), all currently employed in classrooms from transitional kindergarten through 12th grade, who were surveyed this summer by Hart Research Associates on behalf of the CTA and UCLA’s Center for the Transformation of Schools. (Disclosure: The CTA is a financial contributor to Capital & Main.)

While some of the responses were poignant, others sounded red alerts. Asked how they felt about their work, 68% of those surveyed said that “exhausting” fit the description very well, followed by “stressful” (61%), “overwhelming” (51%) and “frustrating” (49%). Only 34% chose the word “rewarding,” while 29% chose “fulfilling.”

That may sound abstract, and it represents a snapshot in time. But the survey’s full report brings those responses into a more practical light. Amid California’s soaring housing costs, teachers say they are increasingly struggling to afford to live near where they work. The burnout rate is high. Political attacks on teachers were cited as a significant detriment to their overall views of the profession, and many of those surveyed said their districts do a poor job of disciplining disruptive students.

And behind the numbers lies the larger context: California is facing a looming teacher shortage that could cripple the state’s ability to educate its residents. By the count of the California School Boards Association, the state needs 100,000 new teachers to right the ship, and statewide data released in June suggests that nearly one in five classes is being taught by someone who isn’t credentialed for that subject.

Given the teacher shortage already forecast, a few of the survey’s data points are chilling. Four in 10 teachers said they have considered leaving their jobs, while 20% said they either probably or definitely will depart the profession within the next three years.

“Nothing matters more for a student’s future than to have a caring, high-quality educator in every classroom,” said CTA President E. Toby Boyd. “Unfortunately, this [survey] data confirms what we’ve been hearing from educators anecdotally. Not only are we experiencing an urgent teacher shortage, but many of our educators are barely hanging on.”

Gray, who has taught for more than 25 years, said a paradigm shift in education has much to do with the kinds of responses seen in the new survey. Where once teachers felt freer to concentrate heavily on academics, “We are spending a lot more time now on the social and emotional health of our students. It’s hard to overstate the impact of social media in all this — it’s bringing the world to our students in ways that aren’t always beneficial, and teachers deal with a lot of that fallout,” she said.

The pandemic, with its profound effect on both teaching and learning, has almost certainly played a role in the survey’s findings. Hart’s research report noted that prior to COVID-19’s arrival in the U.S., 40% of teachers said conditions in the classroom were not changing much, while 45% said they were changing for the worse. In the new survey, 77% of those responding said things have changed for the worse.

There’s also no question that California’s housing market weighs heavily, with 80% of respondents saying they struggled to find an affordable place to live near their school communities. One reason is that their pay isn’t coming close to keeping up with living costs — what education economists call the “teacher pay penalty.” As of 2019, the most recent data available, a regression-adjusted analysis by the Economic Policy Institute found that public educators nationally earned 19.2% less than their nonteaching peers, a discrepancy that has tripled since 1996.

“When you adjust for inflation, there has been no change in teacher compensation over the past 20 years,” said the EPI’s David Cooper. By comparison, Cooper said, similarly educated workers outside the public education field have seen their inflation-adjusted wages rise 22% over the same period.

Money matters, and 88% of those surveyed said that better pay was either their top priority or a very high priority in terms of a strategy to improve teacher retention in California. “But I work in one of the higher-paying districts,” Gray said, “and I know colleagues who still can’t wait to quit. It would be very simple if money were the entire equation, but it’s more complicated than that.”

Teachers’ highest levels of satisfaction in their current jobs were found in being accepted for who they are and working in environments free from discrimination, although those results varied along racial lines. Those who said they were considering leaving the profession, meanwhile, cited burnout and political and ideological attacks as the top two reasons why, followed by staffing shortages and low pay.

Teachers’ feelings about the job are clearly still heartfelt. Eighty percent of those with five years’ teaching experience or less said their top two reasons for being in the profession were to make a difference in the world and to help students. Those percentages drop significantly for those with more than five years in the classroom, suggesting that the stresses of the teaching profession — and living on a teacher’s pay — take a cumulative toll on many.

Gray, who has spent years developing strategies to help herself and other teachers remain flexible in the face of the profession’s dramatic challenges, said she still loves her job, and plans to teach as long as she can. “But I’m having a unique experience compared with almost everyone I know,” she said. “Teachers are showing up to work already stressed. We have to put strategies in place to acknowledge and deal with that, so that we can take care of our students — the whole reason we’re here.”