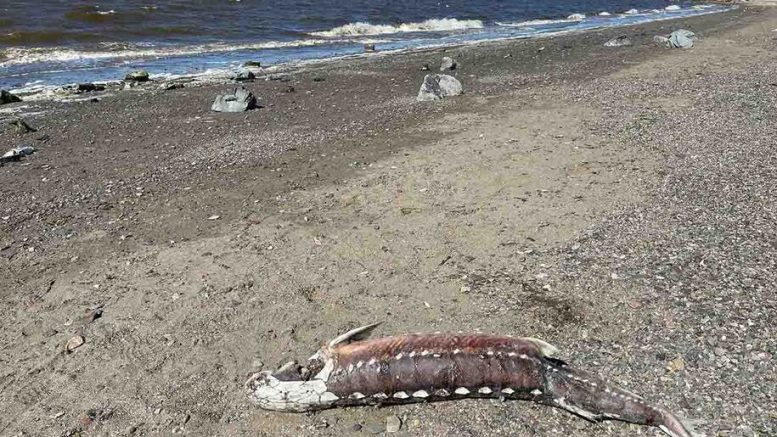 A dead sturgeon rots on the beach after a toxic algae bloom spurred a massive fish die-off. Photo by Dan Bacher

The fish included large sturgeon, sharks, bat rays and striped bass, as well as big quantities of smaller fish, such as gobies and anchovies, in the water and along the shoreline of the bay.

As an investigative reporter who has focused on fish, water, environmental justice and regulatory capture for 40 years, the images of the dead fish and marine organisms were particularly devastating. Like many Californians, I’ve spent thousands of hours fishing on the San Francisco Bay-Delta estuary.

The path of the fish killed included Point Molate, Keller Beach, Alameda, and Hayward in the East Bay, along with the Marin and San Mateo coastlines on the west side of the Bay.

Reports of dead sturgeon on the shoreline also began to emerge on the shoreline of San Pablo Bay, as the fish kill spread through large parts of the waterways.  The fish kill on Lake Merritt, a saltwater body of water in Oakland, was particularly catastrophic, with an estimate of 10,000 fish killed. That tally came from citizen scientist, Damon Tighe.

“The algae bloom that appeared in July and grew to affect wide stretches of the Bay receded, likely because the bloom temporarily exhausted its nutrient supply,” the Baykeeper reported on September 7. “As the bloom died off, other microorganisms feasting on the dead algae rapidly proliferated, drawing down dissolved oxygen in areas of the Bay to levels that are lethal to most fish and shellfish, as well as other invertebrates. We don’t know yet how extensive these “dead zones” are or how long they will last.”

Baykeeper Senior Scientist Jon Rosenfield noted: “Fish kills of this size are unheard of in San Francisco Bay. But they’re not unexpected following on the heels of a red tide algal bloom that is unprecedented in its extent and duration. Based on decades of agency and academic research, Baykeeper has long warned that the Bay was susceptible to a bloom like this because of high loads of nitrogen and phosphorous that are dumped into the Bay every day by the 40 wastewater treatment plants that surround it.”

The California Department of Public Health and the National Oceanic and Atmospheric Administration first identified the dominant algal species forming the bloom as Heterosigma akashiwo. That’s aspecies that, when it forms a bloom, has concretely been associated with fish kills in other places, according to the Baykeeper. The US Geological Service and SFEI confirmed high densities of H. akashiwo, from around south and central San Francisco Bay and San Pablo Bay.

Reports of dead fish, and particularly newly killed fish, tapered off significantly by September 2. Oxygen levels are returning to normal after plummeting to lethal levels in certain areas in the first days of September, according to Rosenfield.

Regarding how long it will take the bay ecosystem to recover from the fish kill, Rosenfeld explained, “Smaller and more mobile organisms are likely to recolonize the Bay more quickly; but for long-lived creatures like sturgeon, recovery will take decades – and that’s only if we begin to take care of the Central Valley rivers where these ancient creatures reproduce.”

The Interagency Ecological Program reported some good news on September 15, when it announced on Twitter that “the Sturgeon Trammel Net study is seeing live sturgeon in San Pablo Bay again. Not as many as they would hope, but it seems at least some fish avoided the #SFbayHAB2022.”

Throughout the emergence of the algae bloom and fish kill, Rosenfield quickly responded to a plethora of media outlets that were asking for interviews. To update readers here, on the fish kill and current actions the public can engage to stop future fish kills, SN&R asked the following questions of Dr. Rosenfield:

SN&R: Since the fish kill on San Francisco Bay started, has anybody come up with any estimate of how many fish of which species have perished?

Rosenfield: No.  No estimate of total mortality will be possible because there is no scientific sampling program in place that can produce such an estimate.  Baykeeper, SFEI, CDFW, and citizen scientists are working to estimate the number of fish observed on the shoreline, but that number is just scratching the surface — most of the dead fish are likely out of sight, under the water.

Have you seen any parallel die off in the invertebrates on the bay?

Rosenfield: Yes.  We have received mortality reports of various molluscs and other invertebrates in several locations.

What is the role that effluents and pollution play in this fish kill?

Rosenfield: On average, 63% of the nitrogen and phosphorus loads in San Francisco Bay are from treated wastewater effluent that is disposed of in the Bay every day by 40 wastewater treatment plants.

Who are the worst polluters on the bay?

Rosenfield: Wastewater treatment plants operated by EBMUD and SFPUC are the largest individual contributors to the Bay’s nutrient pollution problem.

What role do reduced inflows into the Delta because of years of exports play into this fish kill?

Rosenfield: Currents can limit harmful algal blooms by dispersing algae cells before their growth gets out of hand. River flows can be an important control on harmful algal blooms upstream, in the Bay’s Delta. But, during the summer months, even natural flows out of the Delta would not be enough to affect currents in Central Bay, where this bloom formed. In winter and spring, freshwater flows into the Bay might play a larger, indirect role in limiting algae blooms, but not during August.

Have scientists determined whether the algae bloom killed the fish due to dramatic reduction in oxygen levels or to toxicity to the fish or both?

Rosenfield: No, the specific mechanism that caused this fish kill is unknown for the time being.

Have dead birds and sea mammals been documented because of the fish kill?

Rosenfield: So far, we have no confirmed cases of bird or mammal mortality that can be linked directly to this bloom.

How do you feel about the regional board and state water board response to the spill?

Rosenfield: Going forward, the Regional Water Board must accelerate research under its Nutrient Management Strategy to identify safe levels of nutrients for San Francisco Bay; then it must use those results to set protective standards and permit requirements that limit nutrients in discharges to the Bay.

What role does climate change play in exacerbating the fish kill?

Rosenfield: At this point, there’s no known link between this fish kill and a specific climate change mechanism. And there’s no reason to invoke climate change in triggering this event — the necessary conditions for this unprecedented algal bloom (sunlight, water temperatures, and nutrients) are usually present in the Bay during the summer months. Climate change may make these blooms happen with greater regularity in the future.

Are the dead zones in the bay increasing or decreasing now as the algae bloom recedes?

Rosenfield: When algae that form the bloom die in large quantities, their decomposition leads to low dissolved oxygen conditions that cause “dead zones” in the Bay.  Oxygen levels are returning to normal after plummeting to lethal levels in certain areas in the first days of September.

1) Baykeeper has started a petition that people can use to ask the Bay Regional Water Board to accelerate the scientific research necessary to identify nutrient load limits for Wastewater Treatment Plants and prepare to set strong, science-based limits on nutrient loads in wastewater treatment effluent.  It’s here (https://baykeeper.org/action-alert/algae-blooms-new-normal)

2) People can also write to San Francisco Mayor London Breed and ask that San Francisco invest now in water recycling technology that will reduce the City’s nutrient loads while simultaneously reducing its unsustainable demand for water from the overtapped Tuolumne River. Baykeeper has an action alert here (https://baykeeper.org/actionalert/algalbloom)

Are there any significant things about the kill that the media has missed?

Rosenfield: The highly degraded state of the Bay’s native anadromous species prior to the fish kill –a result of unsustainable water diversions from the Central Valley breeding grounds of these fish– makes this tragedy more consequential and difficult to recover from.

Be the first to comment on "Red Tide: toxic algae bloom triggered large fish kill in the Bay, Lake Merritt "