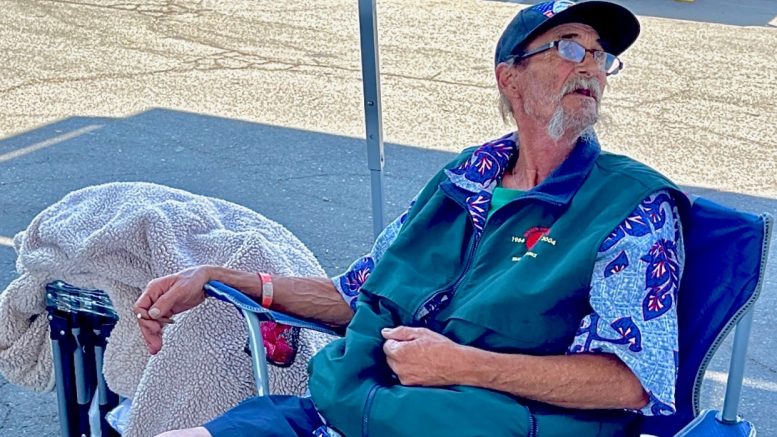 In the wake of losing Paradise, Greenville & Grizzly Flats in recent years, the Mosquito Fire nearly wiped another California town off the map – but firefighters and luck stopped it

If not for some crafty firefighting, and a change in the weather, the mountain town of Foresthill might have burned completely to the ground last week.

Strong winds last Tuesday whipped up 50-feet-high flames, which made an aggressive run up the north face of Volcano Canyon. Air tankers flew in low and dropped load after load of red retardant, while bulldozed clearance lines provided a last-minute firebreak. But the Mosquito Fire reached Foresthill Road, right across the street from Forestville High School at Baltimore Mine Road.

A parking lot full of mothballed vehicles went up in flames. But, fortunately for the high school, the width of Foresthill Road served as a final firebreak. With no more fuel to burn in that direction, firefighters steered the fire eastward, along the south edge of town. More firebreaks and backfires helped to save Worton’s Market, a popular grocery store directly in the fire’s path. Firefighters fought off flames right up to the building’s back receiving door.

Foresthill was saved, but the fire moved on. By Wednesday, it had burned 63,000 acres, which represents about half the size of Lake Tahoe. It was only 20 miles from the lake’s west side, and moving in that direction.

While driving up to photograph the fire on Thursday, SN&R stopped at the Cal Fire evacuation center at Sierra College, where evacuees Derek Jones, Katie McGee and Timothy Huerta were staying. The neighbors are all residents at the Hillcrest Mobile Home Park west of Foresthill. They had been evacuated since September 9th.

“I left with little, but now I have ten outfits,” said Jones, mentioning the generosity of donors who came by with food and clothes. Jones has installed himself as a man in charge, talking to the California’s Office of Emergency Services on his cell phone like a negotiator, asking for food for McGee’s pet iguana.

“Derek is definitely in charge here,” said Huerta. “He is asking them for anything useful for the people,” said Huerta. “Water, Gatorade, snacks, sleeping bags and blankets, basically any things you would need to go camping,” he said.

Jones pulled away from the phone long enough to say, “Newsome is on top of this. He is making shit happen for us.”

A Cal Fire administrator appeared every morning to announce updates. Some evacuees were told that their orders to stay away could last until October, when all roads are finally cleared and all power is restored. Should conditions change for the better, “Cal Fire will come and tell us, let us know,” said Huerta.

The road to Foresthill

We turned east at Auburn, driving up Foresthill Road to survey the fire’s damage. The Hillcrest mobile home park was untouched, and we were able to text photos to Jones, McGee and Huerta back at the evacuee center.

No fire damage was visible from the road until we reached the parking lot across from Foresthill High School, where the old vehicles had burned so dramatically two days earlier.

But the winds were calm on this day. There were no active fires in Foresthill, only smoke trails rising upward from the canyon below. Mop-up crews from as far away as Laguna Beach and Guadalupe, California, insured that no hot spots would flare up again.

Further east on the Foresthill Road, some of the homes and parked cars along the south side were “painted” in bright red fire retardant. CalFire’s air tankers can drop almost 10,000 gallons of retardant in one pass. It looked like it made a direct hit on this cluster of homes. But the fire destroyed several homes near Michigan Bluff.

Over and over, firefighters described how the wind-driven flames that came very close to jumping the road and taking out the entire town before heading north. “You should have been here Tuesday,” one of them said.

Most of the new activity was 10 miles east, in hard-to-access areas. This was a good day for crews to do some “firing” – setting off backfires which could stop any northward spread. A northward advance would burn into an entirely new canyon with drainage paths leading, not into the middle fork of the American River, but into the north fork.

SN&R headed back towards Auburn, then south to Cool, then east to Georgetown and Quintette, on a 53-mile drive to reach the fire’s southeast corner at Stumpy Meadows Reservoir.

Much of last year’s Caldor Fire burned conveniently between highways 50 and 88, and the Mormon Emigrant Trail. But roads leading into the Mosquito Fire traverse steep canyons which are hard to access. These narrow mountain roads, with their tight curves, small shoulders, and brisk drop-offs, can make for a nail-biting drive.

At Stumpy Meadows Reservoir, a mini staging ground was established in the parking lot. A portable Verizon cell tower, mounted onto a trailer, provided phone service for firefighters setting backfires, 1800 feet down a canyon. They used their cell phones to monitor up-to-the-minute Cal Fire maps.

In 2014, Stumpy Meadows was scorched by the King Fire, which destroyed 97,000 acres. Now, the area’s reduced fuel could help slow down this new fire’s southeastern momentum.

Sikorsky and Chinook helicopters pulled water out of the reservoir every 10 minutes, dropping 1,000 to 3.000 gallons directly onto flames a few miles away.

A forest service worker warned about taking any truck down into the canyon for photographs of the flames. “There’s a lot of moon dust on this road,” he said, turning on his Cal Fire map to check the distance. “But we could pull you out if you get stuck.”

On the road back to Cool, numerous hand-made signs saying things like “Thank you firefighters” and “Free meals and drinks for firefighters” dotted the roadside.

As the area’s recent storms passed through, evacuation orders for several zones were lifted, allowing hundreds of residents on the fire’s west side to return home. As of Sunday night, the fire had burned 76,000 acres, destroyed 78 structures and damaged 13 more. Cal Fire said that containment had reached 38%.

The rainstorms did not stop the fire, but subdued fire activity enough for firefighters to construct more effective control lines along the eastern front, as well as the southeast corner at Stumpy Meadows. But wind gusts and the muddy ground on steep terrain introduces new challenges.

On the Mosquito Fire’s west side, mop-up efforts continue to go well. The residents of Foresthill can all breathe a collective sigh of relief that their beloved mountain town still stands.