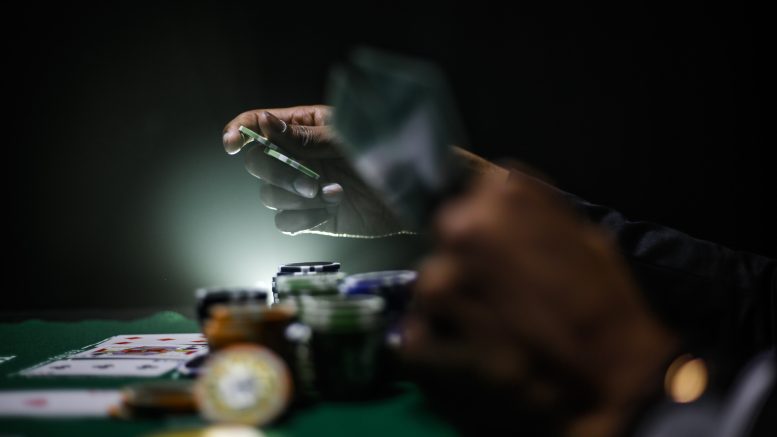 Jeff German was an investigative reporter in Las Vegas for more 40 years. Photograph by Keenan Constance

It’s been a surreal week for veteran newspaper journalists. The revelation that Jeff German, an intrepid, blue-collar investigative reporter who wore his legs out walking the Las Vegas Strip, was violently murdered at his home because of one of his probing stories, sent shockwaves through the industry.

For those who haven’t been following, German spent much of his four-decade career exposing the Mafia’s presence in Vegas and its sketchy entanglements with various casino owners and gaming officials. But police say that organized crime wasn’t responsible for German’s brutal slaying: Rather, they’ve arrested a little-known elected official for the crime, 45-year-old Clark County Public Administrator Robert Telles.

Last May, German published a deep-dive into allegations of bullying and hostile work environment within Telles’ office. For reporters who work investigations, these types of inquiries around a city hall, or county administration building – ones that make sure public money isn’t paying someone who is abusing subordinates under the cloak of authority – are fairly standard assignments. I can’t even keep track of how many I’ve personally done over the years. I doubt my more-experienced colleagues can, either. They’re literally part of the job. According to The New York Times, this exposé on Telles didn’t even appear on the front page of German’s flagship publication, The Las Vegas Review-Journal. It was tucked down somewhere deep in the book. Nonetheless, German’s thorough findings seem to have been enough to help cost Telles his re-election bid. Or so it appears Telles believed, based on police statements.

In the wake of German’s body being discovered, investigators found surveillance footage of a man in the area wearing a strange, orange construction worker disguise with giant-brimmed straw hat. Later, during a search of Telles’ home, police allegedly recovered those same items, along with shoes that had blood on them. They also allegedly found Telles’ DNA at the scene of the murder.

To be clear, the tragedy that befell German is blessedly rare in our country: The Times reports that he’s “only the nineth journalist over the last three decades to be killed in the United States in response to their work.” Compare that to Mexico, where more than 150 journalists have been slaughtered by the cartels in two decades. The body count for reporters in the Philippines is also startlingly high. And since the era of Vladimir Putin, some Russian journalists have been assassinated, including at their homes. American cities haven’t seen this trend since the early 19th century.

Still, the incident with German is being felt – at least by elected officials, law enforcement and my own reporting counterparts – as a kind sign post for how unpredictable living in the public sphere is at the moment. There’s no frame of reference for a time when peoples’ worst obsessions are fed by constantly living online. There’s no playbook for dealing with an era when peoples’ most insidious delusions and self-deflections can absorb a new super-poison from the Internet.

On a more practical level, it’s never been easier to use tech to track someone’s movements. This was also highlighted the same week when noted 30-year-old rapper PnB Rock was shot-to-death inside Roscoe’s House of Chicken ‘N Waffles in Los Angeles. According to detectives, those responsible were out to rob him of expensive jewelry he was sporting; and they knew where to find the performer because his girlfriend had, innocently, just posted their culinary outing on Instagram. One of the assailants simply shot him while he was defenseless, ripped his valuable chains off, and then left him there to bleed to death.

For Mark Zuckerberg, Jack Dorsey and Susan Wojcicki, it’s a brave new world of unbroken social connection. And connection is always good, right? Well, maybe when one can afford those CEO’s elaborate level of security. But for anyone who routinely deals with strangers and can’t afford it, this is an epoch when job tasks and random Instagram posts can lead to carnage.

A newsroom in Las Vegas is certainly grappling with this reality as its staff adorns Jeff German’s desk with flowers and other mementos. Audiences outside their city might have encountered German’s work through his nonfiction book, “Murder in Sin City,” his writing and hosting duties of the Season 2 of the podcast “Mobbed-Up,” or his investigations into lingering questions around the mass-shooting that happened in the Neon Capital of the World in 2017. But for the people of Las Vegas, he was a bring-your-lunchbox-to-work kind of investigative reporter focusing on crime and corruption that actually effected their lives. He doesn’t appear to have been the kind of media employee who ever tried to “make it big.” German adopted a community and then devoted himself to its awareness and well-being for his entire career.

It is far from the most lucrative calling within our profession, but I still think it’s the highest.

TOPICS:Murder of Jeff German in Vegas

Be the first to comment on "Editorial: Chronicle of a death unforetold – a reporter is slain in a major American city"