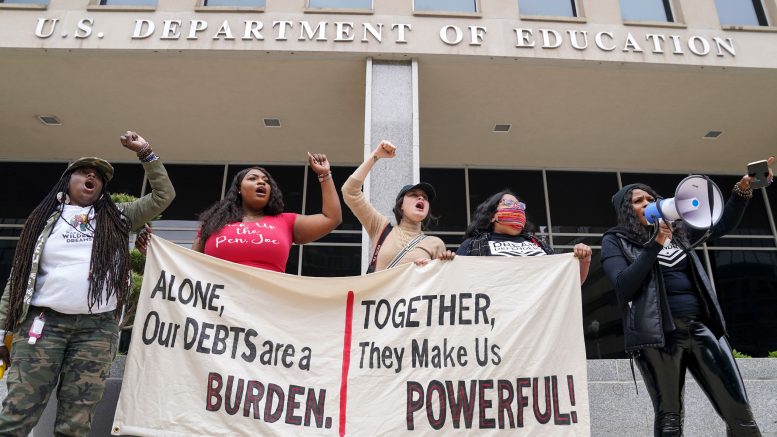 The best option for many overloaded borrowers may be to just say no, argues an organizer in the debt strike movement.

The White House says President Joe Biden will decide by the end of August whether to extend the pandemic-era pause on student loan repayment — and how much, if any, student debt to cancel.

But many struggling borrowers are already pushing back, finding ways to stop their loan payments without actually defaulting. René Christian Moya, an organizer with the Debt Collective, says these actions add up to a “debt strike.” Through such a strike, Moya says, debtors gain collective power, which he hopes will lead to full cancellation of all federal student debt.

The Debt Collective’s previous organizing, in 2015, helped lead the federal government to eliminate millions of dollars in outstanding student loans. Moya told Capital & Main why it is important for those overwhelmed by student loans to act, and how to do so, both for themselves and to reform a failed loan system he says now does more harm than good.

This interview has been edited for length and clarity.

Question: How is a debt strike different from defaulting on a loan?

René Christian Moya: What we want to achieve with the debt strike is to reframe and politicize what people are already doing — safely getting down to $0 a month payments. Until we get full student debt cancellation, we want people to withhold payment and declare themselves as part of the strike.

But we don’t advocate for defaulting on your student loans. There are severe consequences, including damage to your credit score. And unlike other forms of debt, you can’t discharge it in a bankruptcy trial.

How can debtors safely get down to $0 per month payments?

We’re calling for broad debt cancellation. A lot of the federal government’s available relief options have not been adequate — and many people who qualify do not know that they exist.

In the meantime, there are some options. Students can submit a borrower defense claim against universities that have defrauded them. There’s also the Public Service Loan Forgiveness waiver and the income driven repaymentoption.

There are a lot of people who have already defaulted on their student loans, and they can also be part of the strike, and do so publicly.

Why are people with debt joining together in strikes?

Debtors actually have a lot of power. Not on an individual basis, but in the aggregate. Debtors’ unions and debt strikes leverage debt collectively to make demands of creditors.

Ultimately, the value isn’t in quietly making use of options to bring our payments down to zero and then going on our merry way. We want people to be open about it, so that we can use these strikes to educate the broader public that the folks who are sitting on $1.7 trillion of debt need permanent and universal relief, and ultimately, the public provision of higher education.

The idea really began with the Occupy Wall Street movement in 2012. In that pivotal moment, over a decade ago now, a lot of folks in the protests saw themselves as captive debtors.

There are different types of debt. But a lot of the younger folks were talking about student debt. It brought back that apocryphal idea bandied about during Occupy Wall Street that if you owe the bank $100,000, that is on you, but if you owe the bank $100 billion, then suddenly, it’s the bank’s problem. The idea of a debtors union is to build that collective power.

What have debt strikers been able to do so far?

The biggest win we’re seeing now is from a battle that started in 2014: massive student debt cancellation for people who attended the private Corinthian Colleges, which collapsed and defrauded thousands of students. The students didn’t get their degrees and yet they were left holding the bag of student debt.

The victory is quite stunning. Almost $6 billion was canceled for more than half a million people, and the way that it began was with a debt strike. Fifteen former Corinthian students got together and decided that they were not going to pay. They had to undertake a lot of risk in becoming the face of a very innovative set of tactics of withholding payment.

In the process, the Debt Collective also developed a tool that allowed student debtors to challenge their debt through the borrower defense to repayment rule, an option within the law that came out of the Corinthian Colleges debt strike. We did a direct action, where a flood of student debtors used the tool to demand their debt be canceled. It was so powerful, and we used it to such an effect, that it led the federal government to invite those student debtors to Washington to talk about their experiences, and ultimately, to create an official tool on the Department of Education website.

Why are you asking the federal government to cancel student debt now?

The economy is slowing down. Inflation has spiked dramatically over the last year. A lot of people are starting to see their wages not catch up. In the midst of this growing economic crisis, the general public is more indebted than it’s been in a very long time.

Most student loan borrowers won’t be able to restart payments. If people can’t pay for their day-to-day essentials like housing, food and gasoline, how do we expect that they’re suddenly going to pay hundreds of dollars a month in student loans without that having a massive impact on their individual lives and on the broader economy?

We have built a coalition of more than 500 organizations, including trade unions and civil rights groups like the NAACP and the AFL-CIO, to demand that President Biden cancel all student debt, and not just some of it.

And yet here we find ourselves, a couple of months away from the midterm elections — halfway through Biden’s administration — and no debt cancellation has occurred yet. That is grossly insufficient, and is actually scandalous.

Why do you say it’s scandalous?

If the federal government decided to cancel all student loans tomorrow, it would not have a negative effect on the country’s finances. It’s not theoretical. For more than two years now, the federal government has paused student loan payments and it has been beneficial. Millions of people have been able to help drive economic recovery from the pandemic without having so much of their purchasing power go to servicing loans that are unjust to begin with.

What have you learned through the strikes about who has student debt?

Through debtor organizing, we’ve put the spotlight on the grotesque inequities of the system. People are starting to treat student debt really seriously as an issue of social and racial injustice.

We’ve turned on its head the idea that student debt is an issue that only affects the upper middle classes. Disproportionately, the people getting these loans are people who need those loans. These are not people who have a lot of money to begin with. Those impacted are mostly Black and brown debt holders, and Black women in particular. Poor students are the ones who are left holding significant amounts of debt, very late into life.

Whereas a lot of white upper middle-class debtors end up being able to pay off their loans fairly early, this is not the case for Black or Latino debtors, like myself. I’m 38 years old, and I’m still carrying significant student loans. That is the reality of what the student loan system does.

Be the first to comment on "Student loan debt: When refusing to pay is a solution"