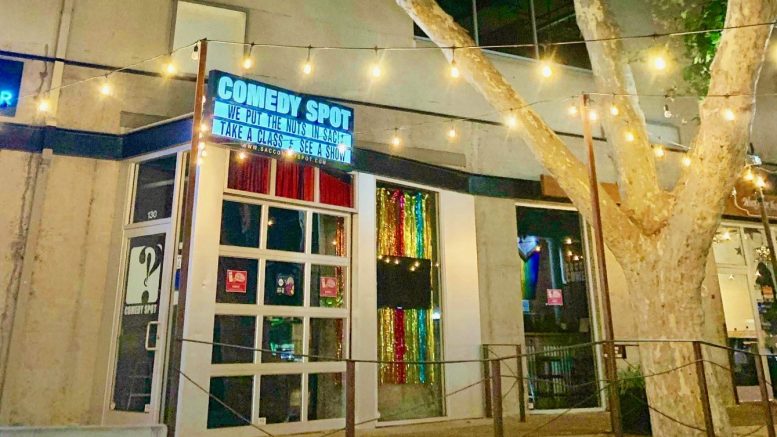 A trio of comedians who met at American River College before venturing onto the national scene will return as prodigal sons of the punchline Aug. 19, offering a lively show at the Comedy Spot in the heart of Midtown.

Devin Ritchie, John Farnsworth and Casey Worthington will give locals a taste of their latest laugh-inducing show, “High Life,” which they describe as “a queer, millennial, stoner, sketch comedy series, focusing on the highs and lows of modern life.”

So far, High Life’s tour has been selling-out venues across the country.

After getting their start in Sacramento over a decade ago, Ritchie, Farnsworth and Worthington relocated to New York as they fine-tuned their skills in comedy, music, theatre and improv. They’ve since performed regularly with the Upright Citizens Brigade, as well as hosted as a long-running Brooklyn-based variety show called The Honeymoon Phase. Lately, the trio has also been working with executive producer Jefferson White of the hit television show Yellowstone on developing a new comedy pilot.

As busy as they are, the team says they’ve attempted to make their new effort “the champagne of sketch comedy shows,” one that weaves their live antics together with special taped sketches from Brooklyn’s best comedians.

In June of 2019, Ritchie and Farnsworth made a Sacramento stop while touring a show called “The Boys of Summer.” Next Friday, they’re hoping for a similar homecoming.

“We are really excited to be bringing the show back,” Ritchie told SN&R. “Sacramento is where we all met, and it feels great to come back home. And our Sac audience always shows out.  Our last show was a total blast, we had a sold-out show that featured sketches, characters, stand up, drag, and lots of confetti. This time we are premiering our brand-new sketches and adding in some fun and even and song and dance.”

Ritchie, Farnsworth and Worthington will kick off “High Life” on Friday, Aug. 19 at 7:30 p.m. Ritchie noted that this evening will also be honoring the team’s friend, Matthew Russel, a local improv comedy legend who recently died of cancer. Additionally, the show features Kevin Scott Brown. Tickets can be purchased here. The Sacramento Comedy Spot is located at 1050 20th St Suite 130.

Michael Solomon, a key figure in the legend of Sacramento’s Tower Records, is a noted photographer who’s captured magic moments at the Monterey Jazz Festival, the New Orleans Jazz Festival, as well as in his hometown at ARCO Arena and Cal Expo. That photography journey began in 1991, when Michael’s father, Russ Solomon – the founder of Tower Records – was at the opening of a store in Chicago when he suddenly said, “Hey, let’s go see some jazz!” Michael has taken those words as the title of his new photography exhibition at the Russ Room, a club above Solomon’s deli in Downtown Sacramento. This all-black-and-white photography display represents captivating shots that Michael has taken over the last 30 years. He calls the collection a celebration of what jazz has meant to his life, along with a tribute to his parents’ inspiration for music and photography. The exhibit’s opening reception is Saturday, August 13 at 6 p.m. and features live music by Harley White’s Jazz Ensemble. After that, the show runs daily during Solomon’s opening hours, through Sunday, October 2nd. The Russ Room and Solomon’s are located at 730 K Street in Sacramento.

Chicago Steve and the Homegrown Comedy show – Aug. 19th at The Stage at Burke’s Junction in Cameron Park

Touring comedy veteran Chicago Steve Barkley will hit the region Friday, Aug. 19 at one of its newest entertainment venues. Chicago Steve has worked with Jerry Seinfeld, George Carlin and Whoopee Goldburg, along with iconic pop culture bands like Boston and Chicago. For more than 40 years, he’s been making people laugh on every kind of stage imaginable, from big metro comedy clubs to casinos and cruise ships. His upcoming set for Homegrown Comedy also features radio host and actor Roman Guzman, guest comedian Gabriel Alexander and Homegrown’s own Chad Beals. The Stage at Burke Junction is Cameron Park’s new theater-in-the-round. The venue sells $5 beer and wine while being flanked by five restaurants, a bar and a salon. Doors open at 6 p.m. for Happy Hour, with the show starting at 8 p.m. Tickets can be purchased at www.stageatburke.com or at the door. The Stage at Burke Junction is located at 3300 Coach Ln e1 in Cameron Park.

Adrienne Shamszad – Aug. 27th at The Sofia Theatre in Sacramento

Northern California singer Adrienne Shamszad will bring the aching spirituality of her sound to Sacramento on Aug. 27, displaying that rare fusion of Iranian culture and American musical legacies that audiences have found completely intoxicating. Shamszad sings in both English and Farsi, all while she conjures wildly striking and elegant guitar work. She is a recent winner of the Living Cultures grant through the Alliance for California Traditional Arts. Shamszad’s upcoming show at the Sofia Theatre will include revolutionary anthems, prayerful power ballads, her takes on the blues, timeless lullabies and, of course, love songs. Her improvising approach has even been known to veer into folk melodies, Indian mantra and hints of rock and roll. Shamszad’s upcoming show on Aug. 27 starts at 7 p.m. Tickets can be purchased here. The Sofia Theatre is located at 700 Capitol Avenue in Sacramento.

Goapele – August 27th at The Crest Theatre in Sacramento

Oakland’s red-hot soul and R&B singer Goapele will bring her soothing, socially conscious vocal art to the historic Crest Theatre Aug. 27.  Known for the sweeping depth of her musical approach, Goapele spent her early years fighting racism and sexism while also performing with the Oakland Youth Choir and singing group Vocal Motion. Over time she developed her skill as a unique songwriter, which got her signed to Columbia Records in 2001. The following year, she released her electrifying song “Closer” as the hallmark of album that has been described as “a mixture of neo-soul and jazz.” In addition to her solo work, Goapele has sang alongside rappers Aceyalone, E-40, Hieroglyphics and Triple Threat, as well as written for the jazz trio, Soulive. Goapele’s show at the Crest Theatre at 8 p.m. Tickets can be purchased here. The Crest Theatre is located at 1013 K Street.

Be the first to comment on "Upcoming: Sac comedians come home with ‘High Life,’ The Russ Room connects with its roots, searing sounds at The Crest and The Sofia"