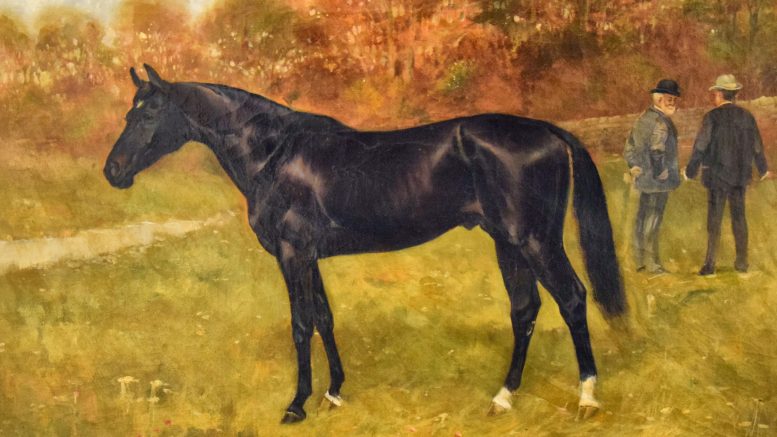 His familiar name is on landmarks throughout the region. Streets, parks, even whole neighborhoods pay tribute to his ranch and horses.

Now, a Sacramento titan is finally getting national recognition in the sport he loved more than a century after his death.

On Friday, James Ben Ali Haggin will be inducted into the National Museum of Racing’s Hall of Fame in Saratoga Springs, N.Y. as a “Pillar of the Turf.” Think of it as Cooperstown for the Sport of Kings.

Haggin, who died in 1914, was selected by the hall’s historic committee. Ben Haggin, his great-grandson, will accept the honor during Friday’s ceremony.

J.B. Haggin, a Kentucky lawyer of very modest means, came to Sacramento in search of Gold Rush riches. Instead, he found his fortune in ranching, copper and silver. He spent it on property, horses and art. Stockton’s Haggin Museum houses his collection, which was greatly expanded by son Louis Haggin for whom the museum is named.

Having no luck as a gold miner, Haggin opened his Sacramento law office in 1850 with partner and future brother-in-law Lloyd Tevis. The two friends married sisters, who were daughters of a Kentucky colonel who also had moved to California. Among other successes, they became very successful land speculators in their newly formed state.

In Sacramento and later San Francisco, Haggin and Tevis had rich friends and clients including George Hearst (father of William Randolph Hearst). Together, the three men formed a mining company that cashed in on Nevada’s silver boom and eventually controlled 80% of the world’s copper supply. According to reports in 1907, the only men richer in the United States than Haggin were John D. Rockefeller and Andrew Carnegie.

But in his heart, Haggin was a horseman. In 1859, he and Tevis acquired the 44,000-acre Rancho del Paso, a former Mexican land grant. Hugging the American River along its southern border, the property stretched east from the Sacramento River to what’s now Roseville and north almost to present-day Lincoln.

Originally, Haggin grazed cattle and sheep at Rancho del Paso but he saw its pastures as potential horse property. By 1873, he was seriously building a thoroughbred breeding operation.

Within a decade, Rancho del Paso became known as “the world’s largest thoroughbred nursery” with 30 stallions and 562 mares. At its height, more than 2,000 horses made their home at the Rancho, which featured a 1-mile training track, palatial barns and 10,000 acres of grass-filled paddocks. (Besides thoroughbreds, Haggin also bred and raced trotters, competing against friend Leland Stanford.)

Haggin’s thoroughbreds were world class, too. Salvator, who was born at Rancho del Paso, was heralded as America’s fastest horse. After he beat all comers at tracks on both coasts, he raced the clock, smashing the world record for a mile by four seconds.  (His mile mark of 1:35-1/5 stood for many years.) Regarded as racing’s Horse of the Year in 1889 and 1890, Salvator won 16 of 19 starts and more than $100,000 – the equivalent of $3.2 million today.

Nicknamed “Queen of the Turf,” the mare Firenze raced for six years, winning 47 times and also topping $100,000. Both Salvator and Firenze have been in racing’s Hall of Fame for decades.

Haggin won the Kentucky Derby when America’s most famous horse race was still in its earliest stages. In 1886, Ben Ali – named for Haggin’s Turkish grandfather, son or himself, according to various reports – won the 12th Kentucky Derby after prepping with a series of races in the Sacramento Valley. A statue of Ben Ali now stands on Del Paso Boulevard.

The Rancho was also home to Tyrant, winner of the 1885 Belmont Stakes (third jewel of racing’s Triple Crown). Haggin bred the 1893 Belmont winner Comanche, too.

With anti-gambling sentiment rising in California at the turn of that century, Haggin eventually moved his thoroughbred operation back to his native state of Kentucky.  In 1897, he bought Elmendorf Farm, a cornerstone of Kentucky’s horse industry, then started accumulating nearby properties. At one point, he owned more than 8,700 acres in Central Kentucky’s horse country. He also bought top mares and stallions, importing horses from England, Ireland and Australia.

Waterboy, who was foaled in Sacramento in 1899, was one of Haggin’s partcular favorites. America’s champion older male in 1903, Waterboy became one of racing’s great comeback stories. At age 3, the colt collided with a loose horse on the track and broke his pelvis. Instead of euthanizing Waterboy, Haggin spared no expense to nurse him back to health. Waterboy repaid him with a series of major stakes victories.

Haggin died at age 91 in 1914 in Newport, R.I., far from his famous ranch and horse farms. Rancho del Paso was sold and subdivided in 1910; Haggin Oaks Golf Complex stands on the site where the Rancho’s famous stallions once lived.

Most locals know the names but not the history; from Hagginwood to Salvator Way to Del Paso Country Club, Haggin still has his stamp on Sacramento. And now he has a place in Saratoga Springs, too.

For more on Haggin and racing’s Hall of Fame: https://www.racingmuseum.org/.