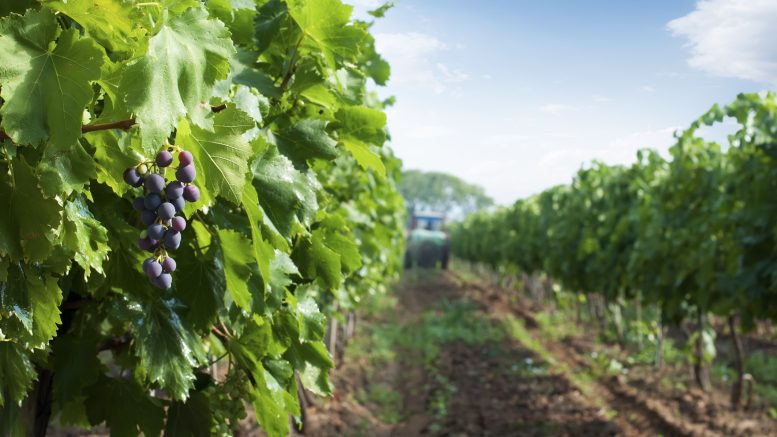 Brian Lilla’s Children of the Vine examines the herbicide’s legacy on the state’s famous wine trails.

Early one winter morning, as Brian Lilla was riding his bike through Napa, California’s hills and meadows, he spotted farmworkers driving ATVs through rows of vines. They hauled huge canisters of the weedkiller Roundup. As the workers sprayed vines, a chemical smell shot through the air.

Having moved to Napa from Oakland nine years ago with his wife to start a family in the seemingly healthy environs of the country, Lilla found himself paying more attention to the use of Roundup after his daughters, now 8 and 5, were born. One day, he recalled, he saw the herbicide sprayed in a vineyard across the street from his daughters’ school.

Meanwhile, the herbicide and its maker, Monsanto, kept making the news.

The active ingredient in Roundup is glyphosate, and glyphosate weedkillers are the most widely used herbicides in the world. In 2015, the World Health Organization released a bombshell report on glyphosate, concluding it is “probably carcinogenic to humans.” By 2018, in the first federal lawsuit against Roundup’s maker, Monsanto (acquired that same year by Bayer AG), a jury awarded a Bay Area groundskeeper who contracted non-Hodgkin’s lymphoma $289 million (reduced by a judge to $78 million). A flood of lawsuits from farmers, farm workers and others followed.

In Children of the Vine, the 54-year-old documentary filmmaker explores the use of glyphosate from the time Roundup hit the market in the 1970s to Monsanto’s creation of “Roundup Ready” genetically modified seeds in the 1990s to its present legal woes and shattered public trust. But even now, with at least 20 countries having banned or limited the use of the herbicide, Lilla was shocked to find out how ubiquitous the chemical is in our daily lives, and how trace amounts of glyphosate appears even in certified organic foods and wine (which by definition are grown without pesticides or herbicides).

The documentary is something of a departure for Lilla, who started making films over 20 years ago on subjects like surfing and skateboarding. His most ambitious project, 2011’s Patagonia Rising, documented a project to build five hydroelectric dams on two of the world’s most pristine rivers. The film’s influence on Chile’s subsequent decision not to build the dams encouraged Lilla to seek out ways his work could make an impact.

Children of the Vine‘ won’t be available to stream, Lilla said, for several months, but will first screen in community and academic settings that allow for discussion. (It most recently aired in Sebastopol, a town in western Sonoma County.)

Lilla discussed what he learned making Children of the Vine and why Bayer’s announcement that it will halt glyphosate sales for home use in 2023 will do little to mitigate its use where it counts most — in agriculture.

The conversation has been edited for brevity and clarity.

Brian Lilla: I think it’s pretty clear from the film that my motivation is that I have kids. When I learned how toxic wine country is, I needed to know what that means. I didn’t want to leave Napa because I have children. I didn’t want to run away from the problem. No matter where I go, there’s going to be glyphosate in the food. Yes, it blew my mind to find out how much it’s being used in the vineyards. But I want to make it clear that the vineyards are not the villains, nor are farms.

You say in the film that wine grape growers wouldn’t talk on the record.

Napa Valley is a relatively small community so the majority of people who live and work here work in the wine industry. Brand identity is really the economic driver. Here you have these mom-and-pop wineries and no one wants to cast a black eye on them. Wine is a luxury item so reputation is important.

Monsanto wouldn’t talk to you on the record, either.

I reached out to Monsanto’s public relations department. It was very cordial; it wasn’t adversarial at all. I made it clear there are many other documentaries about Monsanto. I told them the story I was telling — how Roundup happened, what the scientists say, how Monsanto launched a P.R. campaign when it found out about the WHO report — and so on. They shot all of these questions back at me — who was I talking to, what are they saying? — and they just kept asking questions. Finally, I called someone and she said Bayer AG was going to stop using the Monsanto brand.

As if the name Monsanto was the problem.

Well, another thing that was interesting. I sent them a link to the film and they sent me an eight-page report refuting everything I say about Roundup, which comes from the scientists and legal evidence.

In the film, you talk to farmers who developed cancer, mention farmworkers as the most vulnerable to the effects of the chemical and highlight the plaintiff who won the landmark case against Monsanto. But what did you find out from growers and other wine people regarding their concerns about using glyphosate?

I think it boils down to economics. What is it going to cost to maintain your weed program with Roundup? And what’s really interesting about that question is what you find when you talk to organic growers. When I talked to Frogs Leap Winery [a Rutherford winery that farmed organically for decades], I found that it doesn’t cost more, isn’t more work. It’s about the same.

Monsanto, now Bayer AG, announced last year that it would be removing Roundup from the shelves for consumer use in 2023. It blames the lawsuits, not the product. Still, it seems like a promising development for those who want to see glyphosate banned entirely.

Bayer keeps making claims about pulling glyphosate-based Roundup off the shelves for consumer use. But that still means glyphosate can be sold to commercial landscapers or lawn companies and to growers. What we don’t know is whether the replacement, glufosinate ammonium, is going to be worse.

Has what you’ve learned about glyphosate changed how you and your family live?

The further I investigated the use of Roundup the more I realized how pervasive it is. Glyphosate is not just in your food. It’s in your drinking water, rivers, school campuses and even our playgrounds. As a family we are much more conscientious about eating organic and avoiding food products that potentially contain high residue levels of glyphosate. We installed a water filtration system. We’re also avoiding playgrounds, parks and schools where we know Roundup is being used. Whatever it takes to keep our children away from being exposed to Roundup, we do it. Also, we make sure our monies don’t go to any medicine or agricultural products produced by Bayer.

What’s your plan for the film?

The immediate plan is our national community screening campaign that informs the debate surrounding Roundup and empowers communities to shift away from toxic farming and advocate for organic land care practices. Community screening opportunities for people to come together and have dialogue with local NGOs and farmers about what viable solutions are available to their region.

The second phase of getting the film out there is to work with politicians who are willing to host screenings in political arenas where decisions are being made about the future of Roundup. We’re already in talks with senators who are interested in screening the film at their state’s capitol.

Our final goal is to broadcast Children of the Vine on a platform such as Netflix or PBS where we can reach broader audiences. When my previous investigative documentary, PatagoniaRising, completed an extensive community screening campaign and was eventually broadcast on Netflix, the film had an impact on a decision to not build five hydroelectric dams in the heart of Patagonia, Chile. Our ultimate goal is to have a similar impact on Roundup being banned in the United States.

2 Comments on "A wine country filmmaker looked and found Roundup, the weedkiller tied to cancer, ‘everywhere’"