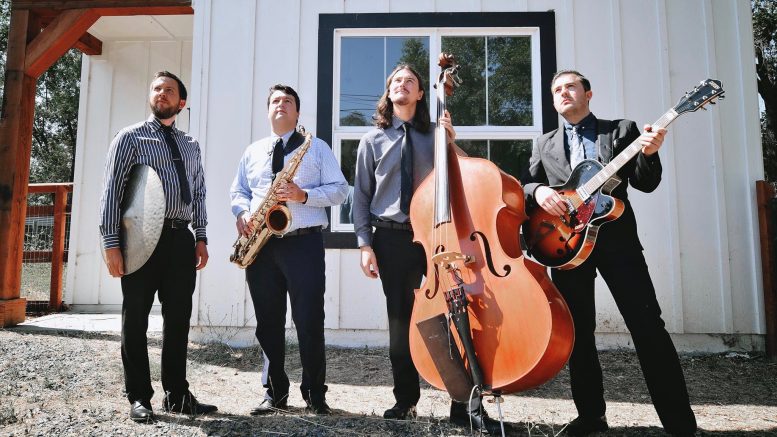 The region is halfway through the hot season – and dancers, musicians and filmmakers are all chipping in to help escape the Summertime Blues.

July 21 – Tony Cole and the Stingers perform at Drake’s: The Barn in West Sacramento

The region’s newest jazz quartet, Tony Cole and the Stingers, will play a sunset show outdoors along the Sacramento River Thursday, July 21 from 6 to 9 p.m. at Drake’s: The Barn. The Stingers are quickly making a name for themselves by throwing upbeat energy into jazz classics, as well as hitting all the right notes on Rat Pack-era standards. The venue they’re playing, the Barn, is West Sacramento’s increasingly popular two-acre gathering hub – a spot with river and city skyline views surrounded by food, beer, wine and cocktails options for enjoying across the lawns of the Bridge District. This community beer garden also includes an outdoor fire pit and two hours of free parking at West Sacramento’s lot around the corner at 5th & Bridge Street. Additionally, there is designated free parking in front of the Barn. Drake’s: the Barn is located at 85 Riverfront St, West Sacramento. There is no cover charge for Tony Cole and the Stinger’s performance that night.

Fresh off news that their latest album, “Katie Knipp: Live at the Green Room Social Club,” has landed them on Billboard’s Top Ten charts for the third time, local musicians Katie Knipp, Gabe Nelson, Otis Mourning and Neil Campisano will take the stage at Sacramento’s Sofia Theater, sharing the evening with Blues Hall of Famer Joe Louis Walker. This will be the Katie Knipp Band’s first performance outside of the Bay Area with its newest member, Nelson, who for years established his reputation as the bassist for the Capital City’s chart-topping group, Cake. This upcoming performance will also feature a special appearance by Quinn Hedges, filling in for the band’s regular guitarist, Christ Martinez. Knipp told SN&R this week that it’s a pleasure to open for Joe Louis Walker for the second time, especially inside one of her band’s favorite California venues. Tickets are $28 to $33. The Sofia at b Street is located at 2700 Capitol Ave, Sacramento.

The Darling Clementines Burlesque and Drag show will put on an especially tantalizing tribute to Sacramento’s frontier past on Sunday, July 31 at Harlow’s nightclub. In addition to the Clementines’ usual fantasy-inducing fun, this evening in Midtown will also include an appearance from DJ Lady Char at Harlow’s pre-show mixer. The show is intended to offer a night of dancing and cheering that’s as wild Sacramento’s old saloon days. Harlow’s recommends bringing cash for tipping its stripping queens, as well as for checking out vendors and spanking booths that are run by Quinn Helix. Tickets are $15 for standing and $20 for Cabaret seating. Doors for the show open at 7 p.m., with the performance at 8 p.m. Harlow’s nightclub is located at 2708 J St, Sacramento.

Daniel Geller and Dayna Goldfine’s documentary on the late singer-songwriter Leonard Cohen will make its Sacramento premier on Saturday, Aug. 6 in the stylish confines of the Tower Theatre. The film delves into Cohen’s life as an artist, viewing his creative compass through the lens of his internationally beloved hymn “Hallelujah.” A song that was initially rejected by Cohen’s longtime label Columbia Records in 1984, “Hallelujah” was a piece that the composer continued to work on, eventually causing other artists like John Cale, Jeff Buckley and Rufus Wainwright to help make it a mega-hit across the world. The unlikely story of “Hallelujah” will light the screen at Sacramento’s landmark theater, starting Aug. 5. Tickets are $11.50. The Tower Theatre is located at 2508 Land Park Dr, Sacramento.

Sacramento’s favorite troubadours of foothill fortitude will play in the actual foothill community they grew up in Saturday, Aug. 13. The venue will be Sutter Creek Provisions, a popular taphouse in Amador County’s Victorian-era mining town known as “the Jewel of the Mother Lode.” Provisions is located 45 miles east of Sacramento. Amidst a setting of western storefronts and rustic, wrapping gardens, the Forever Goldrush boys will play songs from their albums “Unknown Territory,” “Halo in My Backpack,” “The Amador Frequency” and “Chambers,” and as well as cuts from two forthcoming albums. Cover charge is $10. The performance starts at 7 p.m. Sutter Creek Provisions located is at 78 Main St, Sutter Creek.

The band behind the seminal 90s albums “The Ghost that Haunt Me” and “God Shuffled his Feet” is bringing its 25th anniversary tour to Sacramento’s Crest Theatre on Tuesday, Aug. 16. This performance follows a long hiatus from live appearances for the Dummies; and their re-energized return to the road will by highlighted by the bass-baritone vocal power of Brad Roberts, who’ll sing over the pristine and highly original musical arraignments that made the Dummies a rumbling success in the early days of Generation X. Tickets are $35 to $55. Doors for the show open at 7 p.m. The Crest Theatre is located at 1013 K St, Sacramento.

Be the first to comment on "Round up: Midsummer isn’t cooling for live entertainment around the Capital City"