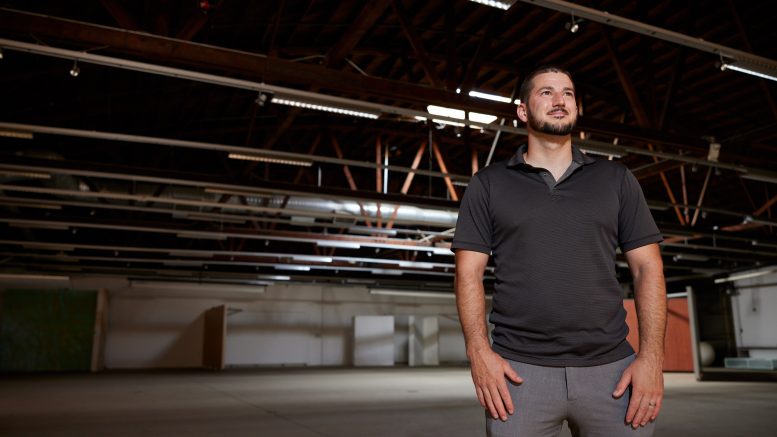 Kevin Dobson, head of Capital College and Career Academy, walks through the site of a new construction charter school for high schoolers. Photo by Fred Greaves

Dobson is the founder and executive director of Capital College and Career Academy, a charter high school focused on construction training that is planned to open at 501 Arden Way in August 2023. Sacramento County approved plans for the school in late April, with Dobson saying it could eventually serve 400 students.

“We don’t see ourselves as a trade school,” said Dobson, a former high school teacher and charter school principal. “It’s about bridging that gap between K to 12 … and really using the construction trades as an avenue into a career.”

This new charter school is just one of several ongoing efforts by construction industry forces in the greater Sacramento region to correct a glaring issue: ensuring there are enough new workers to replace people aging out of the industry, especially as the region attempts to build in big numbers to address its housing crisis.

A 2019 letter to the Sacramento Area Council of Governments from the California Department of Housing and Community Development called for 153,512 new units in the region from June 2021 through August 2029, an average of just under 19,000 annually. Local governments have struggled to keep pace since.

While there’s little data to show the construction training efforts are having a measurable positive impact on getting more young people into the industry, there are some encouraging signs.

Tim Murphy gets a front-row seat to creativity in construction. Murphy is CEO of the Sacramento Regional Builders Exchange, which has a number of different outreach efforts for young people, including the Design Build Competition.

Each year, SRBX and industry partners like Myers & Sons Construction provide the materials students need to build a shed from scratch over the course of a two-day competition. The competition comes after respective schools (35 competed this year) spend months planning, though SRBX also likes to throw curveballs like having students come up with alternative energy sources for their projects.

“We had one school whose answer was, ‘We’re going to build a miniature nuclear reactor in the basement of the building,’” Murphy said, chuckling.

The builders’ exchange works with groups like the North State Building Industry Foundation, whose efforts include a six-week construction training boot camp that kicked off at Sierra College in Rocklin in the fall of 2019. The foundation also works with students as early as middle school.

“In one sense, we’re all competing for the best and brightest to attract into our industry,” said Rick Larkey, technical director and past executive director of the foundation. “In another sense, we’re in competition with all of the other career pathways. We have a lot of unity.”

It’s long been a challenge having enough younger workers to replace retiring workers, with the BLS projecting 167,800 openings annually for construction laborers and helpers through 2030, many of them “expected to result from the need to replace workers who transfer to different occupations or exit the labor force, such as to retire.”

The lack of young new workers is certainly no secret to people like Peter Tateishi, CEO of Associated General Contractors of California, who said, “It’s been an issue that our contractors have been talking about for decades, plural.”

Erin Volk, senior vice president for workforce and community development at AGC of California notes that the average age of an entry-level apprentice in the construction industry is 28.

Construction industry ages don’t appear to be moving in a direction that leaders would like, with Tateishi acknowledging, “It’s not getting younger, it’s getting older.”

But construction can be a lucrative industry for a young worker, who can enter the field as an older teenager or young adult, steer clear of student loan debt (which averages $37,014 for federal borrowers), and earn a competitive salary. If students go the college route, the construction industry still welcomes them, with Volk saying she’s heard of an $80,000 starting wage with a signing bonus for project managers.

“I joke all the time with my college students, ‘If I knew then what I know now,’” Volk said.

Industry leaders acknowledge that the construction industry has a messaging problem, long appearing as a career of last resort for those unwilling or unable to attend college. But they’ve also been able to successfully counter that message, said Heather Lim, vice president of operations for Alcal Specialty Contracting in Sacramento, part of the Pacific Coast Building Products family of companies.

Lim supports work that groups like SRBX do, calling its programs “such an exciting thing to be a part of.” For its part, Lim’s organization can help students with pre-apprenticeship training and preparation.

Palone noted that construction is among the region’s top-growing industries, primarily due to new housing and development. “In order to meet the demand that we currently have, we need the people to be skilled to fill those jobs,” Palone said.

Efforts have been mixed, though, on both attracting and retaining workers.

David Dabaco remembers how enthusiastic Alejandro Olivera was during his days at Lincoln High School’s Engineering and Construction Academy in Stockton, which serves about 500-600 students and is a stalwart Design Build Competition participant.

From Dabaco, Olivera learned crucial elements of construction work, such as always being on-time to job sites, avoiding checking his phone and finding stuff to do even if it was as simple as sweeping nails. And sure enough at 17, Olivera started off as a carpenter, his parents’ jaws dropped when Dabaco showed them the union pay sheet and they realized their son would be earning more than both of them combined.

But at 24, Olivera is now a sheriff’s deputy recruit for Contra Costa County, saying that his earnings in construction fluctuated a lot, $60,000 some years and more than $100,000 others. “It was very, very inconsistent,” Olivera said.

Lauren Giordano was only the latest of her siblings to attend Sheldon High School’s Engineering and Building Trades program, in Elk Grove, which serves about 550 students a year, according to one of its instructors, Jeff Merker.

Giordano, who is now a 20-year-old Sacramento State student, said she loved building and making things for herself in Design Build Competitions, interned at Lennar and was able to land a construction-related job after high school.

The construction industry can struggle with representation, with Kevin Brown, pre-apprenticeship coordinator for Sacramento-Sierra’s Building & Construction Trades Council, a labor group, saying that for the seven counties he oversees, white women comprise 2.7 percent of the workforce, while Black women comprise 1.8 percent.

Data culled from the California Department of Industrial Relations shows women making up around 4 percent of carpentry internships in the greater Sacramento region.

“We can definitely do a better job being more inviting,” Brown said.

Others who went through Sheldon’s building program are having better experiences in the construction industry, such as Alex Klein, who later studied civil engineering at Cal Poly, San Luis Obispo and now works as a project manager for Turner Construction in the Bay Area.

“When I tell my coworkers I was in a shop program in high school, they’re like, ‘Oh man, I would have killed for that opportunity. That’s so cool,’” said Klein, 24.

Another Lincoln High School alum, Alfonso Cardoso is now a 22-year-old apprentice carpenter and, he says, the youngest in his company. “They push me to read the blueprints,” Cardoso said. “They push me to learn everything I can right now. Once I get to that journeyman level, I’ll be ready to run my own jobs.”

There might be limits to what the construction training and outreach efforts can accomplish. Brown said apprenticeship models are based upon a four-year commitment, with the average age for apprentices 26.

“I don’t think us getting 18-20 year-olds at a high snap is really going to happen, because they’re not mature enough in life and life experiences to recognize that this is a bonafide opportunity,” Brown said.

Others, such as Larkey of the North State Building Industry Foundation, are realistic about the messaging job the industry is doing.

“I’d give us a C or a C+ in terms of the success and really trying to break through the stereotypes and offer an alternative image about the opportunity that we have in the construction industry,” Larkey said.

But stakeholders are also optimistic that the efforts are paying off, with Amanda Reynaud, executive director of the North State Building Industry Foundation saying, “The training’s working, young people are interested in those careers, I would say.”

And even if kids flounder out of the building trades and come back, that’s fine for people like Merker, who said, “At least we’ve planted a seed.”