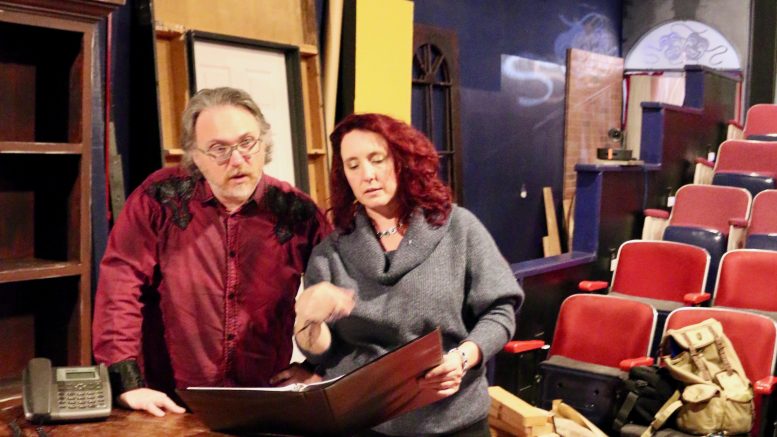 Group that has been bringing writers, actors and directors together finds home at the city’s Ooley Theatre. Next production runs May 26 thru June 11

While serving as an artistic director for a Maryland theater company back in 2003, Jonah Knight had an idea for a play: It would be a murder mystery following two different timelines, coexisting on the same stage and at the same time. Half the action would show how the murder progressed, and the other half would be two detectives working on the case after the body was found.

Knight began writing the script, trying to juggle all the swirling components. For seven years, he wrote, edited and workshopped his play titled Time of Death through the Emerging Playwrights program at the Kennedy Center. But when he moved to Sacramento in 2013, Knight put the play on backburner and went in quite a different direction by entering the pro-wrestling world. He attended the Supreme Pro Wrestling Training Academy and is now a referee for wrestling events.

So, Time of Death sat in slumber. That is, until Knight heard about a unique program for people of the pen called “The Writer’s Room.” It’s an innovative collaboration that brings writers together to work on scripts for stage and screen.

Elise Hodge, creative director for EMH Productions, which has staged plays in Sacramento for the last decade, started the group in 2019 after seeing the need for a place that would nurture playwrights and screenwriters along their path.

“The idea is that a group of writers could work on their scripts as part of a collective community,” Hodge explained. “It’s a way the writers can receive critiques and develop their work.”

The writing group officially meets once a month – during the pandemic it was over Zoom, though now is morphing into face-to-face meetups.

In the process, Hodge also saw an opportunity for other aspects of the theater community that could be incorporated. So, she started a second group consisting of those wanting to expand their experiences as actors, producers, directors, and production crews.

The two groups with a combined membership of more than 30 have separate meetups once a month – one for writers and the second for those interested in developing other production elements. At times, members of both groups come together and combine their talents to support each other, all under the new name of “The Artist’s Collective.”

“One night is devoted to our writers and the other night is for acting and directing, though we bring them together at times for needed input with each other,” said Hodge. “I wanted to form groups to help local playwrights launch their work. They work as a team, learning from each other and nurturing their scripts through the process and the collaboration.”

Hodge explained that there is no typical meeting – it can include read-throughs, taking notes, bringing in actors and directors from the other group to workshop the scripts.

“Our first stage production was scheduled for April 2020, a night of one acts,” said Hodge. “Because of COVID, obviously that never happened. But the company members wanted to continue as a company, and I certainly wasn’t going to give up finding ways to bring our voices to the public. So on to Zoom where we met and also where we streamed all our shows.”

The group started in-person performances the beginning of this year, though they continue to also provide live stream options. Their current season is called “Matters of Life and Death.” It features a playwright once a month, starting with interviewing with the writer and then offering a performance of that playwright’s one act.

Around this time, Knight heard about “The Artist’s Collective” and realized that his play Time of Death was still burning inside him. He decided to join the group.

“I love the discussion, the readings, the workshopping and the final development,” said Knight.

Once his script went through the writers’ workshop, the other group consisting of directors, actors and production crews were incorporated in the process.

“I feel so privileged with the amount of time given to development of the play, to receive constructive criticism and have input from all aspects of a production from writing to directing, to production elements,” Knight acknowledged. “I am so lucky to find such a supportive community willing to share their skills, time, interest, and knowledge.”

After the many years, and the many tweaks, twists and turns, Knight’s play Time of Death is seeing the light of day – or actually, the dark of a theater – when it goes onstage for three weeks of performances at the Ooley Theatre starting May 26. It will also be available online as a virtual production.

“Time of Death is a darkly funny thriller that keeps you guessing the who and how of a double homicide, while watching the dueling detectives battle it out between each other during the investigation,” said Hodge, who is one of the play’s co-directors. “Given this play’s unique use of two timelines, playing out simultaneously for the audience to sink into, this is a wonderful piece that highlights the fact that local writers are worth seeing.”

Time of Death is the fifth play since beginning of the year, and will be the last until Fall, due to the Ooley Theatre lacking air-conditioning.

“We’ll be fundraising over the summer and into the fall to get AC/Heat into this little venue,” Hodge said. “We’ll back in September with another original work.