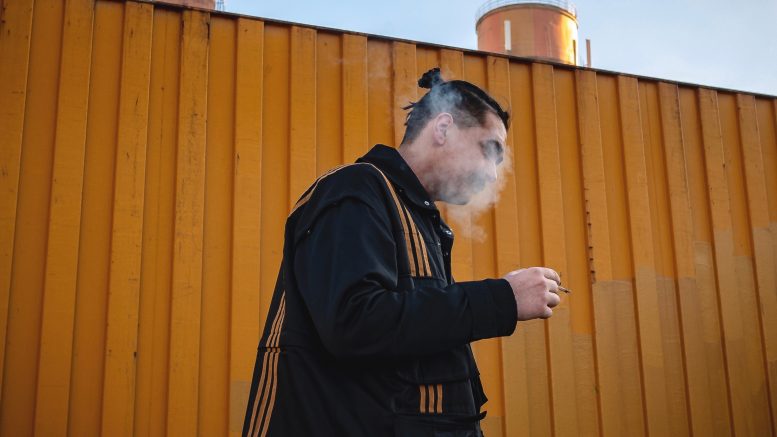 Sitting on a couch in her living room, Hailey Darmogray holds her baby boy, gently patting his back after feeding him breast milk out of a bottle.

The Sacramento apartment, a second story two-bedroom, is small, but just big enough for a family of three.

Darmogray gets up to place her sleeping three-week-old on a small rounded mattress with a raised, attached cushion around the sides. She sits back down on the couch and reaches for her vape, which she always keeps right by her side.

She breathes in a long puff and exhales into the small living room, menthol vapor and particles floating into the air.

“Sometimes I wish I didn’t hit the vape, because now I’m, like, addicted to it,” she says. “I can’t leave the house without it.”

Amid increased concerns about the dangers of vaping and other types of tobacco use, the Sacramento County Board of Supervisors voted in January to ban flavored tobacco product sales in Sacramento’s unincorporated areas starting in July. Officials in the cities of Sacramento and Elk Grove enacted similar bans in recent years.

Supervisor Patrick Kennedy said that the main purpose of the new ordinance was to discourage youth and young adults like Darmogray from smoking. Sacramento County has recently seen an increase in smokers ages 12 to 26 from 2020 to 2021.

“So, there was clearly an issue and the data showed it was being driven by flavored products,” Kennedy says. “Flavored tobacco products are used by the majority of youth and young adult tobacco users. This was a real opportunity to make a difference in the health outcomes of our youth, particularly in disadvantaged communities that use tobacco at higher rates.”

The U.S. Federal Drug Administration cracked down on flavored e-cigarette sales in 2019 but many loopholes remain. In particular, sales of disposable, flavored vaping devices that use synthetic nicotine are on the rise, according to the New York Times. Also, the FDA crackdown did not apply to menthol flavored e-cigarettes, like the ones Darmogray uses.

Gov. Gavin Newsom signed legislation in 2020 that banned flavored tobacco sales, but the law is not yet in effect, pending a 2022 referendum on it.

In Kennedy’s initial presentation where he introduced the ordinance, he said this issue is very personal to him, and he said he strongly feels the flavored tobacco ban is a step towards minimizing the amount of future lung cancer sufferers.

“I can tell you from a personal standpoint, if you were to ask me 11 years ago, ‘do you have anybody in your family with cancer?’ my answer would have been no,” Kennedy had explained. “Within 15 months, lung cancer wiped out an entire generation of my family, and they all started when they were young children. So, this is personal for a lot of us.”

According to Elisa Tong, University of California, Davis professor of medicine and internal medicine doctor, a study conducted by the CDC concluded that people who vape were five to seven times more likely to report having COVID-19.

“Vaping is linked to a substantially increased risk of COVID-19 in teenagers and young adults,” Tong says. “And there is growing evidence that dual use of vapes and cigarettes lead to increased health harms than just using one.”

Kennedy said he believes the ban will help minimize COVID hospitalizations and deaths.

“Anything we can do to increase lung health, which I believe this ordinance will do, can have a positive effect on COVID hospitalizations as well,” is how Kennedy explains it.

Tong said that vaping is not approved by the FDA for smoking cessation. Although a slightly safer alternative to smoking, e-cigarettes are still known to contain carcinogens and other hazardous substances to human health.

“Even if vapes have less carcinogens than cigarettes, that does not mean it is a safe product,” Tong says. “The flavor chemicals, fine particles and heavy metals may negatively impact heart and lung health especially with immediate mechanisms like inflammation.”

Tong added that a study done in 2018 from the National Library of Medicine concluded that e-cigarette use “was associated with lower general health scores, higher breathing difficulty scores (typically and past month), and greater proportions of those who responded ‘yes’ to having chest pain, palpitations, coronary heart disease, arrhythmia, COPD, and asthma.”

She said that another study from 2021 in Science Daily about dual use said that individuals who smoked traditional cigarettes in addition to using e-cigarettes were at higher risk for cardiovascular disease and death.

Darmogray, 25, started vaping at 19 years old, and with the exception of her two pregnancies, has not been able to stop since. She goes through one disposable cartridge in one to three days, which is the nicotine equivalent of one pack of cigarettes.

“It’s not easy to quit cold turkey,” Darmogray admits. “The only reason I was able to stop was because I had a reason, and it was for my babies’ health.”

“It’s actually weirdly relaxing, the sensation of breathing in and breathing out,” she says. “It’s almost like if you’re really stressed out from working and need to go outside and take a deep breath. Taking a puff makes you feel more relaxed and ready to just keep going.”

Despite having an infant in the home, she and her husband continue to vape, even with the baby in the same room, which she said they didn’t know was hazardous to the baby’s health.

“I feel like eventually I’m going to quit. I don’t see myself doing this for the rest of my life, and being a mom is more important to me,” Darmogray says. “I don’t want my son seeing me smoking as he gets older.”

She added that her husband, Alec Darmogray, 25, has had three upper respiratory viruses in the last year, and has been complaining of difficulty breathing.

“We don’t really know if he had COVID or not, I just know that he was coughing and having a hard time breathing,” Darmogray recalls.

Darmogray acknowledged that since she’s been using e-cigarettes, she’s noticed significant changes in her health and breathing.

“You get a little more pooped out breathing wise, like if you go on a walk you just feel completely out of breath, which I didn’t used to feel before I vaped,” she says.

Darmogray also relayed that she feels like she and her husband have been getting sick more often, which has put stress on them, since her husband is the sole provider for the family and works independently.

“He has a really difficult job where he does a lot of physical labor, so it’s really hard on his breathing,” she says. “The last time he got sick, he was out for two weeks, and I’m getting tired of feeling like we’re just getting by.”

Darmogray plans to educate herself further and create a practical plan for her and her husband to quit, with the health of their baby as the main focus.

“I was so much healthier before I vaped,” Darmogray stresses. “It gives me a lot to think about, and I definitely want to create a healthier environment for my son.”