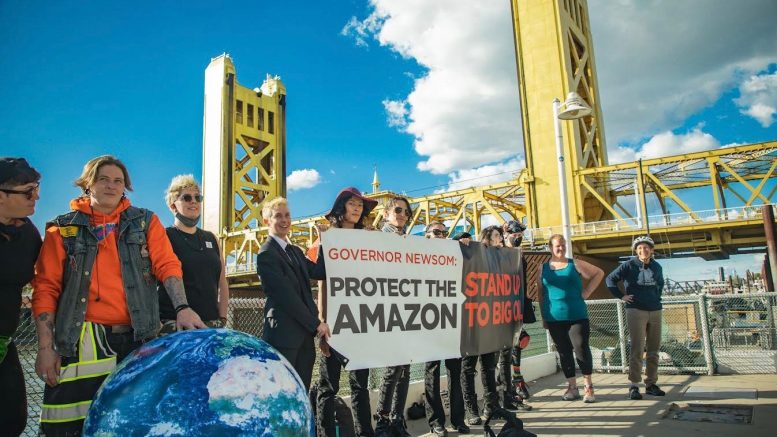 Activists display an inflatable globe and a banner with their message to Gavin Newsom in front of the Tower Bridge on Earth Day. Photo courtesy of Stand.earth.

On the early evening of Earth Day 2022, activists from Stand.earth, Amazon Watch and allied groups dropped a 75-foot banner from the iconic, gold-shaded Tower Bridge to demand Gov. Gavin Newsom stand up to Big Oil, ending California’s role in the destruction of the Amazon Rainforest.

The banner hung over the Sacramento River, the state’s longest river and top producer of wild salmon.

While at the Tower Bridge, activists also displayed a huge inflatable globe on a floating barge featuring a smaller banner in Spanish and English.

Wilder Zeiser, Senior Climate Campaigner at Stand.earth, said, “We are here representing concerned citizens from around this state and around the world who are shocked by California’s role in consuming more oil from the Amazon than any other region in the world. It’s time for Governor Newsom to stand up to Big Oil and commit to no new oil drilling in California and an end to California’s role in new drilling in the Amazon.”

Amari Owens, cofounder of Cutie Affinity, agreed about the urgency.

“It was our first direct action, an act of solidarity on earth day to honor the original people of the land, the indigenous peoples of California and the Amazon,” Owens explained. “We’re a scrappy local grassroots group that is in a unique position to garner the attention of state officials that oversee the fifth largest economy in the world. The Port of LA in Long Beach imports more crude oil from the Amazon than anywhere on the globe. We want Newsom to reign in rogue refineries.”

In 2021, Stand.earth and Amazon Watch released Linked Fates, a groundbreaking investigative report that tracked crude oil from the Western Amazon to the United States, according to Zeiser.

The report revealed that California refineries, businesses, and consumers convert 50% of the Amazon oil exported globally into fuel for airports such as LAX, distributors such as Amazon.com, trucking fleets such as PepsiCo., and retail gas giants such as COSTCO. This Linked Fates research revealed that 89% of the crude oil exported from the Amazon comes from Ecuador, with the remainder coming from Colombia and Peru.

Marathon, Chevron, and Valero – all in California – are the top 3 refiners of oil from the Amazon, according to the report. Of the Amazon crude that goes to the U.S., 27% goes to Marathon, 22% goes to Valero, and 17% goes to Chevron.

The role of Chevron, headquartered in Dublin, California, is particularly notable since the company is connected to some of the oil industry’s worst impacts in the Amazon, as well as in California. Chevron has spent nearly $2 billion fighting its court-ordered mandate to pay $9.5 billion in clean-up and community reparations costs that it is responsible for in Ecuador, the report points out.

Environmentalists note that Newsom and his administration haven’t taken action to ensure that the state won’t be complicit in new drilling in the Amazon. This is why Stand.earth, Amazon Watch and other allies say they are increasing pressure on the administration to act, including with messages like this one on Earth Day.

“Oil extraction is wreaking havoc on our territories, our communities, and the planet. We are living with constant contamination,” said Lola Piaguaje, Vice President of CONFENIAE (Confederation of Indigenous Peoples of the Ecuadorian Amazon. “We get sick every time we drink the water, and plans to expand extraction puts our very existence at risk. As Indigenous peoples we are caretakers and defenders of our territories and our rights. But we need others like California act urgently and take responsibility for their role in fueling Amazon destruction.”

Tyson Miller, Stand.earth Amazon Campaign Director, noted, “The Amazon is the last place in the world where oil drilling should be expanding. Governor Newsom has a critical opportunity to build on his climate leadership and ensure that California won’t continue to be complicit in the indigenous rights violations and toxic environmental impacts of new oil drilling in the Amazon.”

Kevin Koenig, Climate and Energy Director for Amazon Watch, also pointed out the Golden State’s complacency in this ongoing disaster.

“California is importing more oil from the Amazon than ever, and its consumption is driving expansion deeper into frontier forests and Indigenous territories without their consent,” Koenig said. “California is addicted to Amazon crude. Governor Newsom needs to admit the Golden State has a problem and take action.”

Oil drilling in the Amazon is leading to deforestation, contamination, and rights violations of Indigenous peoples, according to activists who have been studying the problem. Despite its “green” and “progressive” image that is constantly promoted by California officials, the Linked Fates research reveals that California consumes more oil from the Amazon than any other region in the world. In fact, 1 in 9 gallons pumped on average in California comes from the Amazon, and in Southern California, the average is 1 in 7 gallons.

“Governor Newsom has reasons for concern on this issue,” the two groups reported. “According to citizen polling from Directions Research, two thirds of US citizens are concerned about Amazonian oil imports and would be more likely to vote for elected officials who will take action.”

The groups also pointed out that Newsom will host the prestigious international “Summit of the Americas” in Los Angeles on June 6. The theme of this year’s conference is ‘Building a Sustainable, Resilient, and Equitable Future,’ a theme that they said is “impossible with Newsom’s current policies in place.”

Amazonian Indigenous federations, Stand.earth, Amazon Watch, and a growing movement believe Governor Newsom must do more to truly put California, and the world, on the path to this future.

“As the largest Amazon oil export destination, California has been and currently is central to crude-oil drilling and expansion in the Western Amazon,” a host of those organizations said in a statement. “Ecuador’s President Lasso plans to double oil production and this is leading to road building in intact forests and protected areas and buffer zones of indigenous peoples living in voluntary isolation. Oil blocks covering approximately 7.5 million acres (3 million hectares) of intact forests are slated to be auctioned off by Q3 2022.”

“Aging infrastructure has contributed to oil spills like the recent January pipeline rupture and two that occurred in 2020 and impacted hundreds of thousand of Indigenous peoples in Ecuador and will likely also be an ongoing issue,” the groups went on. “The human rights violations of oil and extractive industries operating in the region are impacting millions of Indigenous peoples in the Amazon basin whose cultural survival depends on intact forests and rivers.”

The banner drop at the Tower Bridge on Earth Day took place just three days after the FracTracker Alliance published a new analysis revealing that drilling new Enhanced Oil Recovery (EOR) wells using higher risk steam injection techniques jumped up 59% in the first quarter of 2022 even though California oil production continues to decline. These permits are posted on a map at www.NewsomWellWatch.com.

In addition, while oil companies continue to apply for permits to drill new wells and to rework them, in the last two years nearly two thirds granted by state regulators have gone unused, according to a joint press statement issued by Consumer Watchdog and FracTracker Alliance.

“The state continues to approve drilling permits to reach tar-like oil when industry sits on the permits it’s been granted,” said Consumer Watchdog Energy Project Director Liza Tucker. “This makes no sense. Governor Newsom needs to seize this moment and stop all permitting.  This is the moment for a real transition to renewable energy rather than leaving it on the backburner.”

Tucker said California’s oil and gas industry is asking the Newsom administration to streamline the approval of new drilling permits, but the data shows that it is a “disingenuous request.” FracTracker cross-referenced drilled well data sets from the California Geologic Energy Management Division (CalGEM) going back to the start of 2020. It found that of the 2,686 new drilling permits approved by CalGEM since then, 1,689 of them—a whole 63%–currently remain unused.

“Oil and gas companies have plenty of permits to drill but choose to stock more instead,” said Kyle Ferrar, FracTracker’s Western Program Coordinator. “The real agenda for oil companies is clear, use any moment of crisis to lock in decades of future oil dependence that puts an unnecessary burden on the future of the climate and community health. That’s a scenario that both the current climate crisis and war in Ukraine makes clear, we cannot afford.”

According to the latest permit analysis by FracTracker Alliance, through December 31, 2021, approvals of all types of oil drilling permits rose 3.2% in the first quarter of 2022 over 2021.

The Western States Petroleum Association, the largest and most powerful corporate lobbying group in Sacramento, has spent over $17.5 million alone lobbying the California Legislature and other state officials over the past three years.

In 2021, WSPA spent $4,397,004 lobbying legislators and state officials to serve Big Oil’s agenda, according to data filed with California Secretary of State’s Office.

WSPA spent a total of $8.8 million in 2019 and $4,267,181 in 2020 on lobbying California legislators and officials as thousands of oil and gas drilling permits were approved by CalGEM, the state’s oil and gas regulatory agency: www.citywatchla.com/…

In 2020, even what was described as a weak bill recommending health and safety setbacks around oil and gas failed to get through the oil industry-friendly California Legislature.

Then, in 2021, another bill, SB 467, failed to pass throughout the legislature because of heavy oil industry lobbying of legislators, including those who had received campaign contributions from the oil and gas industry. The bill would have banned fracking by 2023 eliminating fracking and instituting mandatory health and safety zones between oil and gas extraction and places where Californians live, work, and study.

The inordinate influence by Big Oil on California politicians and regulators is most dramatically evidenced by the approval of thousands of new and reworked onshore oil and gas well permits by CalGEM, the state’s oil and gas regulatory agency, since Newsom took office in January 2019.