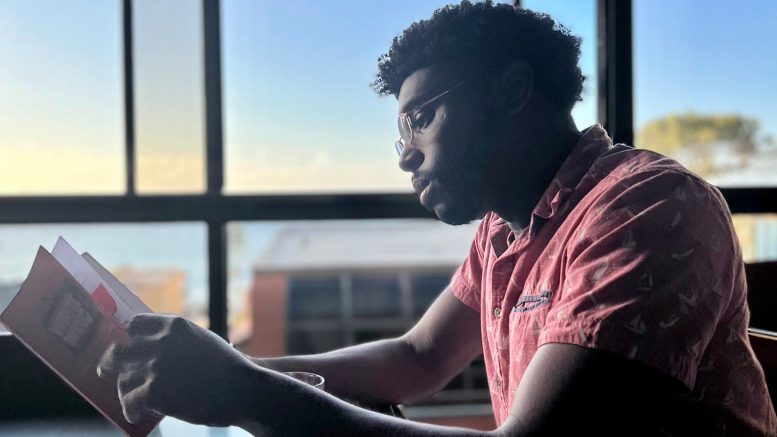 J.P. Ba reviewing his new book in a cafe. Photograph by Brooke Dawson.

A journalist who was raised in Sacramento – cutting his teeth on the Capital City’s news cycle – is now pulling back the curtain on the nation’s dysfunctional media environment; and he’s using his time at a famously embattled conservative network to prove most of his points.

Jorden P. Hales was the quintessential general assignment reporter during his years covering Sacramento. He wrote about everything from chaotic police standoffs to controversies at Roseville City Hall, occasionally penning stories on the urban core’s entertainment and even Friday night lights football action. He has since changed his name and byline to J.P. Ba.

Ba says he’s always had a love for the region, but eventually started feeling a gravitational pull towards San Diego. He made his move there in the fall of 2017. Looking to quickly get a media job, Ba accepted a position at One America News Network.

At that moment in time, the conservative-branded entity wasn’t yet a household name. Hales was given a heads-up that the ownership had political leanings, but he assumed the place would still hold true to some semblance of journalistic norms and ethics. Instead, according to the 32-year-old writer, the network was a case study in deviating from the principals that trustworthy information is generally built on – and a harbinger for tactics that would soon be undermining the reliability of progressive-tilting outlets as well.

Ba is a graduate of Center High School in Antelope. He got his first taste of journalism while attending American River College and writing for its student newspaper. He was soon earning freelance assignments from the Antelope News and the Carmichael Times. In 2014, Ba was hired as a full-time reporter for the Roseville Press Tribune. He spent nearly three years at that post [full disclosure: the author of this article was Ba’s news director for some of that period]. By 2015, Ba was also producing his own Sacramento-centric magazine called Urbs Indomita, which put an emphasis on celebrating the region’s unique history. Ba eventually became a news producer at CBS 13 in Sacramento (working under his previous name). Readers of “Write Wing” will notice that he took careful notes of every journalistic lesson he learned along the way. For every criticism that Ba has of One America News Network’s departures from common standards – or any media outlet’s shortfalls, for that matter – his tome provides real-world examples from his own career about how his colleagues have approached the work with transparency and professionalism.

When Ba first started working at One America, better known on the cable dial as OANN, he wasn’t expecting to find himself so conflicted about what was going out on the airwaves. He had been told in his job interview that he’d work as a regular news writer. Whatever reservations Ba had about OANNs aggressively conservative posture, he temporarily put them out of his mind.

Just weeks into the job, embattled G.O.P. candidate Roy Moore was running for U.S. Senate in Alabama. Revelations had broken that nine women of varying ages were accusing him of sexual assault and misconduct stemming from the past. As Ba and his coworkers watched the election night returns coming in, it was clear that Moore had been defeated by Democrat Doug Jones. That’s when, according to Ba’s book, OANN’s team watched owner Robert Herring Sr. come into the newsroom and tell them to report that Moore had won the Senate seat. Ba’s recollection is that Herring explained to his reporters that OANN had access to “internal polling” which would prove Moore won.

That OANN falsely report Moore’s victory – “by a large margin” – is not in question: The network’s since-disappeared broadcast was captured by The Wrap, along with a since-deleted article from its website. Following the confusion, The Hill reviewed what The Wrap had reported, concluding that on election night, OANN had told its audience “We have some breaking news for you that we want to announce. Our unofficial polling shows Senate candidate Roy Moore sweeping the election right now in Alabama by a large margin … Now the president of One America News, Robert Herring, would like to congratulate Moore on the fine campaign that he and his wife have run. Speaking with campaign representatives, we are being told that there are strong signs the majority of voters have now come out in support of the judge.”

Ba says he was disturbed by the turn of events.

“I realized this is not how things are done,” he remembered.

According to Ba, things only got stranger at the network. He was asked by a supervisor to delete his own social media posts, in which he expressed private opinions on foreign election interference. Ba stresses he thought the post was couched in a bi-partisan way. He says, later, he saw a company email from co-worker fretting about “liberal” infiltrators trying to collapse the network from within and sabotage its embrace of wholesome American values.

For Ba, the peculiarities culminated in one OANN’s producer sending an email that affirmed its reporters didn’t have to cite sources in their stories – the antithesis of everything Ba believes solid journalism is built on. Ba says that when he raised concerns about that tactic, another producer bluntly told him, “We don’t cite sources because we don’t have sources.”

“I would voice my concerns to staff – my peers,” Hales explained. “But you had to be careful, because they made a list of people they thought were left-leaning in their politics.”

SN&R spoke by phone with Charles Herring, one of Robert Sr.’s sons, who co-owns the network. SN&R asked about Ba’s time of employment and his new book about OANN’s practices. Charles Herring said he was not sure who Ba was – or Jorden Hales – and had not seen what he’d written. In an effort to allow a fair time response, SN&R agreed to wait a week to publish this story so Charles Herring could have his team review Ba’s book. The following week, Charles Herring could not be reached by phone for comment.

One person collaborating much of what Ba reports in “Write Wing” is David Jones, who worked alongside him at OANN. As of this writing, Jones and Ba are currently working together, again, at CBS San Diego. Jones told SN&R that he was fully supportive of Ba exploring their time at OANN in a book.

“I was excited about him doing it,” Jones said. “He’s a great writer, so start with. I’d like to see him write a lot of books in the future; but with this book, specifically, I was enthusiastic about it because we did experience something a little different at One America – something a little weird. Reading his book helped put all that into perspective even more, since that was my first job working in news.”

He added, “As he was working on it, he really took the feedback I gave him, as well.”

After reviewing “Write Wing,” Jones was also glad that Ba presented his media criticism of OANN as an issue with the network’s structure and mission, and not a takedown of personalities there. Jones says that most people who worked at OANN, including some managers, were nice.

“Jorden was tactful,” he reflected. “There were things that felt uncomfortable about working there, but, as a company, they did treat their employees well. And I think you’d hear that from a lot of people who’d worked there. But I agree with Jordan about what’s broken in their business model.”

As for OANN fans who assume Ba simply has an axe to grind with the company now that he’s a producer for another network, the reality is that “Write Wing” actually concludes with a dire analysis of the larger information landscape. Ba points to a 2019 Gallup Poll that found a majority of Americans don’t trust “the media” even “a fair amount,” which cannot be wholly attributed to right-leaning news agencies. Ba breaks down the implications of massive media monopolies in the U.S.– and the associated group-think that pervades them – as well as an insightful observation that people generally understand “when their pain and suffering are used as a form of social and professional currency” by so-called news purveyors.

And then there’s all the cost-cutting on quality and resources for the sake of corporate greed.

Ba ends “Write Wing” by urging responsible news consumers to demand media ownership companies up their games. That, or the public should take its eyes and ears to newer forms of alternative media where individuals are willing to get the job done.

“Right now, the industry is giving you the bare minimum,” Ba noted. “They’ve left the newsrooms just too strapped for cash; the reporters too over-worked. And in that scenario, there’s a lot more pressure to have inappropriate deals to get access to government or other special interest groups. Just understand that there are better options out there, and it’s critical we go out and find those.”