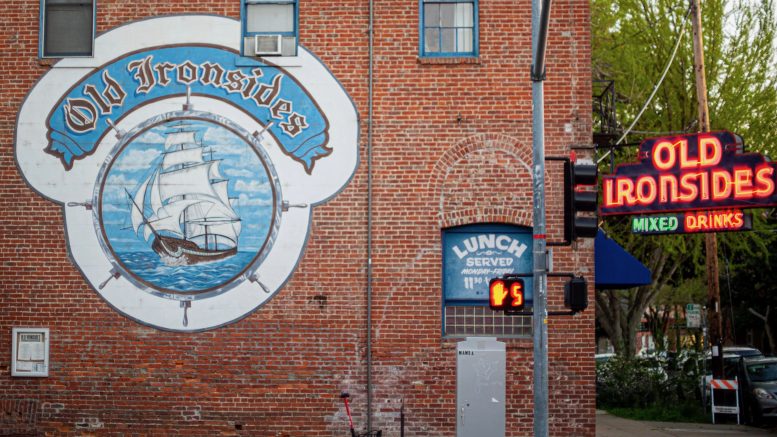 Old Ironsides on Sacramento's S Street is currently in escrow, according to co-owner Kim Kanelos. Photograph by Luis Gael Jimenez

Kim Kanelos calls herself the “black sheep” of her family. She’s the one who was instrumental in converting their restaurant and bar into a club which featured local and big-name bands of all genres, not to mention comedians.

“I always say I threw it out to the universe that I wanted somehow to do something here at night,” Kanelos remembered.

In its prime, Old Ironsides exploded into a hot-spot for wild, young and ambitious talent. Now, the venue’s age is starting to show through its nautical themed decor and dated bar, though its fluorescent backlit stage still remains a home-base for many local musicians.

After 88 years – and a long ride in Sac’s nightclub and music scene – Kanelos’ family may no longer own Old Ironsides.

“We are in escrow right now,” Kanelos said. “I hope it all goes well, because we’ve been there before. But it feels pretty good.”

Given the potential of new owners, the future of one of Sacramento’s oldest bars and most iconic music venues is suddenly uncertain.

Over the decades, Old Ironsides has changed with every generation.

Established in 1934 by Kenelos’ grandfather, Bill Bordisso, the restaurant and bar obtained the first liquor license in Sacramento after Prohibition. In the 50s, the location featured a game room and bottle shop, filling orders for Sacramento politicians and lobbyists. In the 1960s, the restaurant was a hotspot for its cocktail hour.

By the 90s, “Old I” was a staple venue in the Sacramento nightclub scene. Well-known bands like Cake, Sublime and Death Cab for Cutie all played at the venue.

“Comedians from all over would come, and do Laughs Unlimited on Wednesday night, but they didn’t have a late show,” Kanelos said. “So, they would come over here.”

Each person who took over booking duties would implement new bands, genres and shows into Old Ironsides’ repertoire.

The Moe Better Mann Show was a fixture at the venue on Wednesday nights from 1993 to 1999. It was set up like a late night talk show with a musical act, skits and a local special guest. The guests were often comedians, quirky, or had odd professions, Kanelos recalled.

“This girl came one time, she made, um, merkins, and she modeled them over her outfit,” Kanelos said laughing.

She didn’t realize it at the time, but this period was a heyday for the venue and a prime moment in the Sacramento art’s scene.

“It really was a golden era, and it was great that the club was such a catalyst in that, for creativity, and for bands getting big and that sort of thing,” Kanelos said. “There was just a real buzz around it.”

Marty Taters, musician and open mic host, has been involved in the Sacramento scene for the last 20 years. He’s watched Old Ironsides evolve through it all. He says it was common for nearly every band to play in S Street’s brick landmark on their way through the Capital City.

“A lot of people have played there,” Taters noted. “Some amazing, amazing musicians. And some beginners too. It’s a mixed genre coming to open mics now. You want it to be supportive, that’s what’s so good about open mics.”

The bar’s Wednesday open mics are still a staple spot for many musicians. The venue feels familiar and offers opportunities for many young musicians and comics to practice.

“We all enjoyed that it’s a very accepting, communal kind of open mic,” said Mason Durst, singer and songwriter for Band of Coyotes. “There’s a lot of people working on their craft and, just like us, would return over the months. I feel like I’ve made most of my friends from that open mic. I love it.”

According to Durst, Band of Coyotes met through the weekly event in 2018 and still call the venue home.

“That’s kind of how the Band of Coyotes had started,” Durst explained. “We became friends just by going to Ironsides’ open mic, and then somewhere pretty soon our whole band was living within two, if not three blocks from Ironsides.”

He added that, with the pandemic and news of the sale, the open mic crowd has died down at the venue the last few years, leaving many musicians and employees uncertain of what’s to come.

Today, Kanelos, her mother and brother are the only ones left running and business. While her family will still owns the building, she says there isn’t anyone to pass the business down to.

“We were the only ones left and none of the next generation really wanted to continue it,” she said. “We were ready to retire.”

Three years ago, the family announced they would begin the process of selling. Kanelos admitted it’s taken a little longer than expected due to the pandemic and a few deals falling through.

“I know that the new owners, if this goes through, are focusing on the live music. So, I’m really happy for that,” she said.

Even with live music starting up again in Sacramento, for musicians who call Old Ironsides home, like Band of Coyotes, the uncertainty of the transition is still worrisome.

“​​As much as I understand them wanting to [sell], we’re all a little bit nervous as to what direction it’s gonna go in,” Durst observed.

Change always brings concern and the pandemic has only made the survival of venues more uncertain. Holy Diver suddenly shut its doors last year, followed by the Boardwalk in January. The Press Club closed in 2020, with the plan to relocate, but still hasn’t.

“Change is inevitable,” Taters told SN&R. “I could see the owners, they’re ready to retire. Whoever does buy it, I hope they don’t change it too much. Venues like this need to stay open.”

Kanelos acknowledged that she’d like to see Old Ironsides maintain its history of being a space open to all different forms of art and music.

“I would like to see it just be an opportunity for artists and musicians to come together and kind of create a scene again,” she said. “I feel honored that we were part of it and that I met so many cool people, great people, and I hope it continues on.”

Sacramento’s Old Ironsides celebrates the music of Tool and Nirvana with a heavy-handed double bill on Nov. 25

Be the first to comment on "The Iron 88: After almost nine decades, Sacramento appreciates the past and ponders the future of Old Ironsides   "