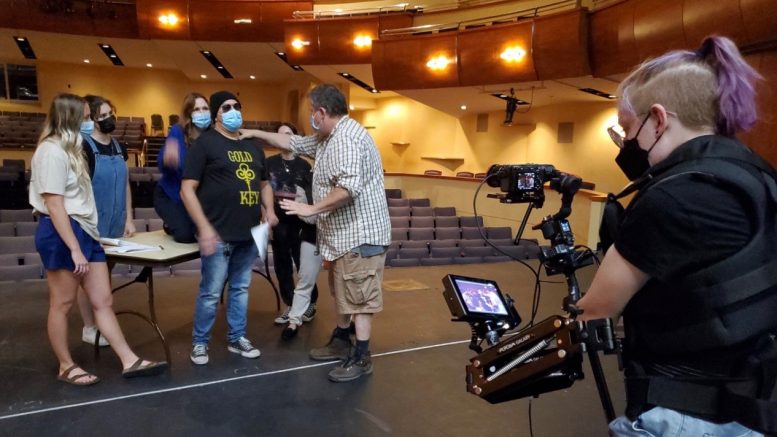 In spring of 2020, Folsom Lake College’s Theatre Arts department was in the middle of planning and producing various drama projects when COVID lockdowns hit, shutting down any live productions.

As with many colleges and universities, there was an immediate scramble on how to continue. Both students and instructors were facing challenges none had anticipated – and no one was prepared.

“When classes suddenly went remote, the projects we had underway in person were cancelled and we were then left with several months to pivot to something else,” recalled David Harris, Professor of Theatre and Cinema, Folsom Lake College. “Options were somewhat limited at first to the technology at hand.”

First, there was the challenge of how to teach arts that rely on interplay, onstage between actors, as well as all the theater production elements such as stage and costume design, lighting, and sound.

“A large aspect of drama classes is to teach team-building, problem-solving and cultural understanding,” said Harris. “Theatre is the art of collaboration. It is the most important aspect of what we do.”

“During the shutdowns, I definitely lost that physical connection with those around me,” she remembered. “Theater is amazing online and off, but nothing beats being in the same room, or on the same stage, making eye contact with your scene partner. And there is also nothing like performing for a live audience.”

But to soldier on, Folsom College turned to its tech team, which was already known for its innovations. It was a team of two: Theater Professor and Department Chair Ian Wallace and Theater Technician Cameron Hoyt.

“Certain areas of theater practicum are not really possible to do over Zoom, such as stage carpentry or stage acting,” said Harris. “But thanks to the creative thinking and tenacity of Ian and Cameron, we found a method that retained vital aspects of theatre education such as collective problem solving and entertaining storytelling.”

“From my office, I directed the actors where to look so that it would appear that they were speaking to one another,” Harris explained.” And using computer animation software, we created a dynamic fantasy environment.”

Christensen, now attending Sacramento State University was surprised by what was accomplished.

“When classes first shut down, I was definitely sad because we were right in the middle of rehearsal for the musical, Pippin,” she said. “When we found out that an in-person show was not going to be possible, the theater department came up with a great idea for the cast to make a video of us singing and dancing to a song from the show. Each of us filmed ourselves at home dancing with the choreography we learned for the song, and we also recorded ourselves singing the song as well.”

“For most of the first year, most theaters were just trying to improve on the zoom theater or other versions of that,” Hanson observed. “We all got better at the technology to present plays. I thought it was fun: We would get into costume in our own little homes, get all set up in front of our green screens, and then had the actors, sound and video crew check in.”

Hanson gives a nod to the Folsom Lake College for their ground-breaking technology.

“Folsom Lake College did a different version of live streaming from home with a product called VMix, where they were able to take eight different live feeds from eight different actors’ houses, and layer them over each other so that it looked like actors were in the same place.”

For their production of Midsummer Night’s Dream, Folsom Lake brought everything to the table – well, actually to the theater – by live-streaming the performance that incorporated innovative interplay and video production.

“Our in-person camera operators moved in concert with our actors to present a story similar to the live television musical theatre productions we are seeing recently,” said Harris. “Every day was a learning experience for us and the student/actors. The entire production can be watched on YouTube

Sacramento City College’s drama students, on the other hand, were able to present an outdoor production of Hamlet in the campus courtyard accessible through Youtube.

“We performed Hamlet together for three cameras, live-streaming it to an audience on YouTube,” said Hanson. “We were all very excited, having barely been around other humans for a year and a half, and we learned a lot, we had fun, and it went well.” The entire production can be watched on YouTube: https://www.youtube.com/watch?v=8SjrwieEYX

Though much thought and creativity went into the virtual performances, all involved acknowledge that much was missing. Students are generally thankful of being able to go back to performing before a live audience.

“Human beings in the room together – students, audience members, our community partners, and all of us on the production teams and faculty staff,” Harris stressed. “We were all keenly aware of the human aspect of theatre that was lost.”

Though grateful for being able to perform again before live audiences, what local colleges learned around new technologies may open the path up for hybrid productions, offered through both live and virtual performances

“Right now, we are about to open The Laramie Project, which will be in-person and again live-streamed,” said Hanson. “Many theatres are doing this, to try to reach everyone who wants to watch.”

Christensen, who remains involved in the upcoming Folsom’s Falcon’s Eye Theatre production of RENT, is also looking on the bright side.

“I did gain more knowledge in terms of video/zoom and online work with film and theater though, which will be beneficial in the future as we continue on with new technologies,” she said.

Be the first to comment on "The show DID go on: How passion, tech and resolve saved local college theater programs during the pandemic"