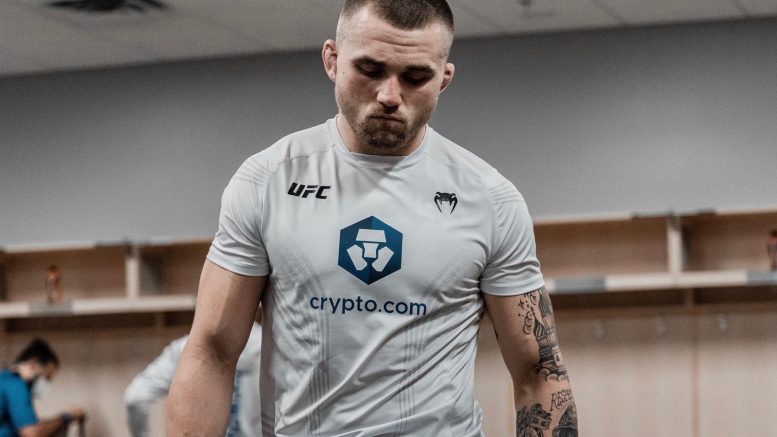 Mixed martial artist Nick Maximov got his big break on Oct. 6, 2018. He was fighting on the undercard of a King of the Cage match at Gold County Casino in Oroville, and he wasn’t in the cage for long. It took him 23 seconds to knock out his opponent, Nick Piecuch, and start off his professional career with a win.

Three-plus years later, Maximov is still undefeated, and this weekend he takes his 7-0 professional record to Las Vegas to fight Punahele Soriano (8-1) as part of UFC Fight Night on ESPN. It’s his second official bout with the UFC—MMA’s premiere league.

Maximov’s ascent through the ranks of the popular sport has been swift. Within a year of high school—and a very successful run on the Chico High wrestling team, with 137 wins against 37 losses—he was already fighting in amateur MMA bouts. At the same time, he was wrestling for programs at Clackamas Community College and, briefly, at Oregon State, earning All-American honors during his second season at the former.

Maximov turned pro a couple months shy of his 21st birthday. He now trains four to five days a week at the Nick Diaz Academy (NDA) in Stockton, which is owned by the brother of well-known MMA star Nate Diaz. That is where the SN&R caught up with Maximov, 24, by phone to talk about his journey to becoming a professional fighter.

SN&R: After winning your first fight in such dramatic fashion, you must have felt like you were doing something right?

SN&R: What was your jumping off point? What got you started down the road toward MMA?

I started when I was like 11 or 12 years old. I started at a karate/taekwondo gym … branched off to do jujitsu, and then I started wrestling.

SN&R: Where did you go for lessons?

I went to Azad’s Martial Arts Center when I was hella young.

SN&R: Was there a point where it clicked that you might have talent for fighting?

The second I stepped on the mat, it just felt like it was the thing for me. I quit baseball to do karate and stuff at the time. I knew I wanted to do contact sports, but I didn’t know what. I just fell into wrestling and fighting.

SN&R: You have two brothers—are they into fighting? You guys fight with each other growing up?

They are [into it] now, but at the time, I don’t think they were as into it as I was. My younger brother and I would wrestle all the time—my older brother not so much, but my younger one, we would fight all the time. Now he’s big. He’s taller than me, and when I’m losing weight [before a bout], he’s probably just bigger than me, too. It’s kind of funny. Yeah, him and I would go at it.

SN&R: Any fighters inspire you early on?

Bruce Lee and Jackie Chan. I watched a Bruce Lee marathon, and it motivated me. I remember being in seventh and eighth grade and reading his books on philosophy. When he went to America, he was preaching and studying philosophy, and I was reading all about it. Whatever he did, I wanted to do.

SN&R: How’d you get hooked up with NDA?

Funny enough, Randy Spence [former MMA fighter from Redding; now head trainer at NDA] and my dad used to work together. He went to train with Nick and Nate … and I’d say around 2013 or ’14, we saw Randy at a jujitsu tournament and he offered for us to come train, and we have been coming ever since.

SN&R: In addition to the training at NDA, is being with them like being on a team?

I would say even more than a team. We’re just like homies; we’re just like friends with each other. If one of us gets married, we’ll be there.

SN&R: You’re up to more than 22,000 followers on Instagram. Are you feeling that more people are starting to pay attention to you as a fighter?

Yeah. I don’t even focus on it like that. It’s cool, but it’s weird when people on the street kind of start to know you. You don’t know them, but they know you. When I was in L.A., I got that a little bit, and in Vegas. Being with Nate and stuff helps a lot. He puts my name everywhere. But I don’t really focus on that.

Every since COVID, the UFC has become really popular, it seems like, and a lot of people want to fight. I tell people that I wasn’t really that great at school, so I know I really couldn’t get a job. I was good at sports. I tell these people all the time, “If you don’t have to fight, you probably shouldn’t.” It’s fucking intimidating. Like, walking in the ring and they lock the cage, that’s scary. When you go to another gym to spar and box people, it’s like, if you don’t want to get punched in the head, I suggest most people shouldn’t.

SN&R: What are your goals with the sport?

Just try to be the best in the world and the best that I can be. Try to motivate and inspire people to train and be healthy and watch the sport. Hopefully, put Chico on the map. Aaron Rodgers is doing it—hopefully, I can fill his shoes.

Be the first to comment on "Ready for the main event: A look at regional MMA fighter Nick Maximov"