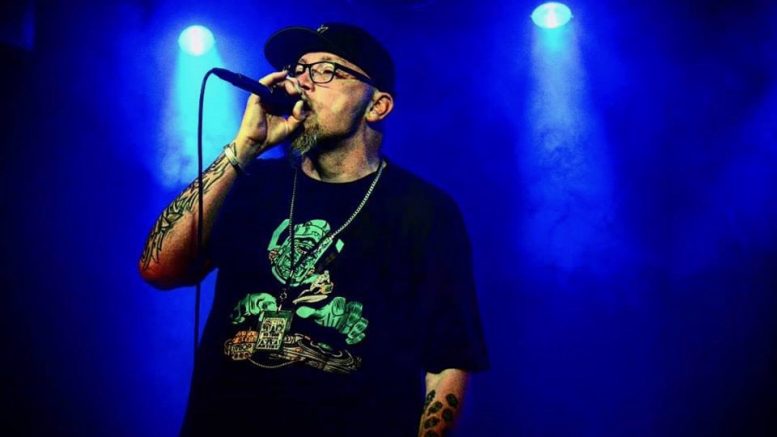 One of Sacramento’s longest-running hip hop performers is a tall-ass white dude with a goatee.

That description – along with a hat, glasses, a microphone and a stage – is one of the first things you hear about man with a 30-year track record of pleasing local crowds.

After experiencing a long break in touring, Mr. P Chill will be joining Old Man Z, Blaze Joe and headliner Oscar Goldman on stage at Cafe Colonial on Feb. 21 at 7:00 p.m. The overabundance of down time means P Chill is anxious to hit the road again.

“I’m ready for the uptime again,” he chuckles. “This is kind of a special year for me. It’s the 30 year anniversary of the first single from the group I had in high school: 2 Dope. Not to be confused with the guy from ICP. We put the group together in late ‘90, early ‘91 and the record in 92. It was me and my lifelong best friend DJ Double Ace.”

Gabby Garcia, who owns and operates Cafe Colonial, has a reputation as a steadfast supporter of local musicians. According to P Chill, being a touring act would be so much easier if every city had its own Gabby Garcia.

Garcia joked that whenever P Chill is on the marquee, she always makes sure to have Hamm’s beer around – it’s well-known as the artist’s favorite libation.

In the years since taking over the now-closed Blue Lamp, Garcia watched P Chill wield his experience in the music industry, not only booking his own shows but also aiding hip hop newbies as they began to pursue their dreams.

“He was always a regular performer and we’ve collaborated with him on Hip Hop Helps, every December, to get toys for [the Stanford Settlement Neighborhood Center],” Garcia says. “He’s so knowledgeable about … ways to stay alive as a small performer, which I always appreciated being a small business owner. He’s found a way to stay relevant, tour and make money from it; always been impressed with that.”

Packing venues that include the Fox and Goose, and building tiny armies of devoted fans in cities across New Mexico, Oregon, Washington, Nevada and Texas, Mr. P Chill has been a near-constant touring force in the West. When he first made his way to Eugene, Oregon, in 2005, a gift from a fan not only sparked a childhood memory, but began a now 17-year reputation as Hamm’s Beer’s No.1 fan.

“After [the show], we went back to the hotel with a bunch of fans from the show to party and they brought cases of Hamm’s,” P Chill remembers. “I was like, ‘Yo, that’s the beer with that bear! I wanna try it!’ It was great. Before the pandemic, they were going to start a Hammbassador program. They said that I was in line to be one of the Hammbassadors and everything kind of went kaput in 2020. I still stay on their target.

He adds, “One of the nicest things they did was, the week after my mom died — I think they saw the posts that my mom passed — they sent me a care package with a shirt and socks and all of this stuff. Who else can say that their favorite beer sends them a care package when they lose their mom?”

Bundles, who featured P Chill’s latest music videos on his show “Max and Patrick,” told SN&R that, though the two have toured, performed and recorded together for years, P Chill has been on his radar a lot longer than that.

“Back in high school, I saw flyers with this guy wearing a Kangol hat — just like this white dude— this guy raps?” Bundles explains, recalling 2007, the first time they shared a venue, much to his star-stricken delight. “One of my first bands, Confused Clarity, got booked … at Capital Garage on the same bill. I was just like, ‘Dude, I’ve seen you around for years now, so it’s pretty cool that we’re doing this show together.’”

Soon after, Confused Clarity began to book shows out of town. In Humboldt county, a booker asked Bundles who they might bring with them from Sacramento. The obvious choice was Mr. P Chill. These initial collaborations have grown into friendship, with the two performers occasionally sharing dates and tours supporting each other on the road.

“For Confused Clarity, it was our first experience on the road,” Bundles goes on. “You get a little closer with someone when you’re sharing a travel experience and lodging. We’ve definitely covered a lot of ground together. I’ve learned a lot from him too: ways to network, ways to go about shows. He recorded the song I did with Gift of Gab and helped mix down the song with Scarab, that was in the Max & Patrick season one finale.”

In the years leading up to the COVID-19 outbreak that upended the lives of artists, business owners and consumers alike, there was already a black cloud of grief haunting Mr. P Chill. In 2018, as the sole caregiver to his dying mother, he cut back his usual touring schedule. Mourning her death the following March, P Chill’s tour schedule remained scant.

By the end of that year, with new material created while processing his loss, P Chill dipped his toe back into touring. Telling himself, “I’m gonna get through this,” he planned an early 2020 release for an album he eventually titled “L.I.F.E. – Living in Fragile Environments.” Just as momentum began to pick up, the release of P Chill’s 14th album encountered a hitch when stay-at-home orders went into effect March of 2020.

“L.I.F.E was originally supposed to be an acronym for Love in Full Effect,” reads promotional postcards the performer sent out in advance of the album’s eventual Jan. 29, 2021 release. “When things took a turn, that acronym no longer seemed appropriate, nor was it a good description of the songs on this album.”

In its final form, Living in Fragile Environments explores themes of loss, mental health, frustrations with former President Trump, being faced with a global pandemic and finding direction without aim.

In the song “Morning Coffee,” P Chill decidedly breaks down the perceived barriers of mental health as a taboo subject and becomes an advocate. He slyly hides a message about dealing with depression and struggling with dependency behind a chorus that involves a feline-heavy morning meditation.

“If I don’t have my daily routine, it gets chaotic – yes, the song is about my cat, but it’s also about mental health,” P Chill reflects. “I decided mental health was no longer something I was just going to keep personal anymore. If I can help somebody with what they’re going through and inspire them to get the help they need or at least feel comfortable in their own skin through music, so be it. Maybe, though music, I’m reaching someone that I’ll never even meet face to face, and I hope that I am.”

Be the first to comment on "Sacramento’s Mr. P Chill keeps up the crate diggin’ and spittin’ rhymes"