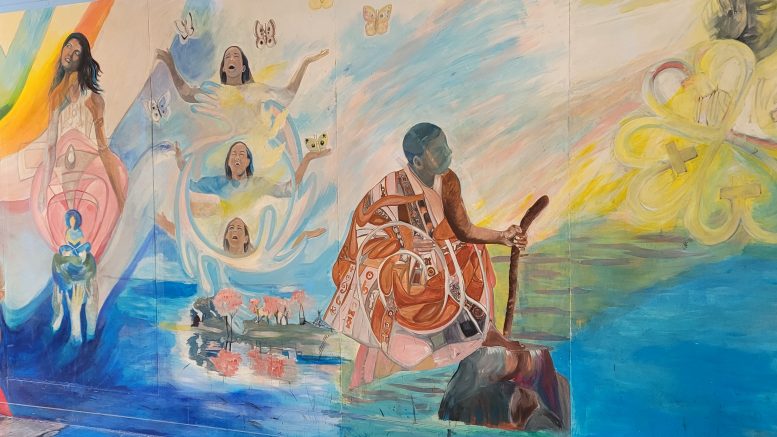 A mural by Shonna McDaniels, founder and director of the Sojourner Truth African Heritage Museum, in Florin Square Hall. Photograph by Casey Rafter

Drum raps bounce joyfully off of the walls of the African Marketplace at the Florin Business Arts Complex. The sounds come from the Hakili African Roots Drum and Dance Company, which is leading a pounding percussion circle as the structure’s halls and shops fill with delighted chatter. In the central foyer, Shonna McDaniels, founder and director of the Sojourner Truth African Heritage Museum, sets out bright yellow cloth so that visitors can craft Kwanzaa-themed pillows.

McDaniels has run the Florin Square museum celebrating African culture for 27 years. Since 2005 she’s been working with various artists to cover nearly every wall of the complex’s interior with paintings that depict historically significant Black men and women. A muralist herself with her name on several walls, McDaniels hopes to continue adding to this visually striking collection of community-led wall paintings.

“We’re trying to apply for a grant to do some public art out in the parking lot and on the exterior,” she says. “It’ll help beautify the corner of 24th and Florin and Tamoshanter. It’s kind of an eyesore right now. We’ve been working with a lot of young emerging artists doing murals for us. We have a group of them working on murals out on Mack road … sponsored by the City of Sacramento.”

The museum, also known as the SOJO Museum, has a remarkable group of youth docents who are active in it. Their age-range is middle school to college years. McDaniels also recently rolled out an annual membership program with tiers named after important historical people from African American history.

Directing a museum with a unique and important message, McDaniels has been able to collaborate with bigger partners, including the Crocker Art Museum. The SOJO worked with the Crocker as part of the latter’s “Block by Block” initiative, with a goal of instilling a stronger museum presence in low-income communities.

“Crocker has been gracious enough to make us a part of their big grants, so we can have a collaborative partnership,” McDaniels acknowledged. “We worked together to bring art programming and exhibits to community festivals we established with entertainment and art activities.”

The Crocker’s Director of Education, Stacey Shelnut-Hendrick, noted that since her institution began coordinating with the SOJO Museum, McDaniels has shown undying support for the arts, and for her community.

“Over the years, one of my greatest professional pleasures has been our partnerships with the SOJO Museum – Shonna is a role model and true inspiration,” Shelnut-Hendrick said. “We began working with SOJO on our Kwanzaa celebration over a decade ago, and that blossomed into lots of other endeavors. Shonna will always live up to her commitments, giving 200% all the time. She has positioned the [SOJO] museum to operate and think differently.”

In February, the SOJO will be working with the California Museum to present “The Green Book: Navigating to Freedom.” The event has recently been rescheduled to Feb. 26 due to a recent uptick in local COVID-19 cases. McDaniels said there will be an African Market there, as well as keynote speakers, story time and a screening of a documentary called, ““The Green Book: Guide to Freedom.”

When the pandemic halted business at Florin Square, McDaniels didn’t miss a beat. Through the museum, she and 24 other non-profit organizations worked with The Center at Sutter Health as part of a bi-monthly event called “Sacramento Youth PopUp.” Partners would host movie nights, or take groups of young people for a bowling event; the Heritage Museum created in-person and virtual activities involving traditional art.

“This will be our third year: [That program started in response] to the Stephon Clark killing,” McDaniels explained. “There was a lot of youth in the community that were doing things out of rage. We wanted to be able to provide a solution and redirect that rage into some positive. Every first and third Friday — even though we were closed — we prepared over 200 hot meals and up to 100 make and take art bags.”

In March of 2021 — in the midst of the pandemic — the museum received funding from SMUD to add 1,700-square-feet to its space, allowing McDaniels to spread her exhibits out over a total of 3,000-square-feet. What was once merely a room, and a gift shop, is now a portal to multiple wings of artifacts and art.

The Dr. Samella Lewis Gallery, curated by artist and musician Unity Lewis, is one of the exhibits that was added as part of the expansion. The installation is named after the artist and art collector known as the “Godmother of African American Art.” According to Lewis, it will be updated with other work every three months. From his perspective, Sacramento doesn’t have anything like the SOJO Museum.

“I did an exhibit called Black Artists on Art Liberation for Juneteenth and [Sacramento artist and gallery owner] Faith McKinnie recommended that Shonna be in the show, so I put her in,” Lewis said, adding that any collaboration with McDaniels is an honor. “All the care that she puts into [the museum] and the personal attention and detail that she gives that space — she’s really not only a profound artist, but a profound curator. She’s somebody that we need in the community, holding it down for the culture like she does.”

The Sacramento Region Community Foundation’s annual Big Day of Giving on May 5 brings arts and non-profit organizations opportunities to reach otherwise challenging financial goals: In 2020, the SOJO received a donation of $45,000 from a local business — a huge step towards its goal of expanding the space enough for an installation exploring African American history in music.

“We’re trying to raise enough funds for our third expansion,” McDaniels said. “We’re in prayer about it. Big Day of Giving was originally just for artists or art groups, not for non-profits. We were the very first one. We usually only make $200-500 while other organizations pull in $50,000 – $100,000. We’ve worked just as hard in this community for a long time.”

In addition to holding African Markets every first and third Saturdays, the museum joins the other Black business owners at the center each Second Saturday. McDaniels mentioned the museum always has tables at these special events with free arts or crafts that families can engage with – another path to learning about and celebrating African culture.

“We’re trying to make this an attraction that people will be drawn to, and not just the Downtown area,” McDaniels said. “We’re trying to change that. People know [Florin Square] as the Black Wall Street because of the percentage of black business owners here. The intent originally…was for Black business owners to … help each other with resources and build together. We never lost sight of that mission.”