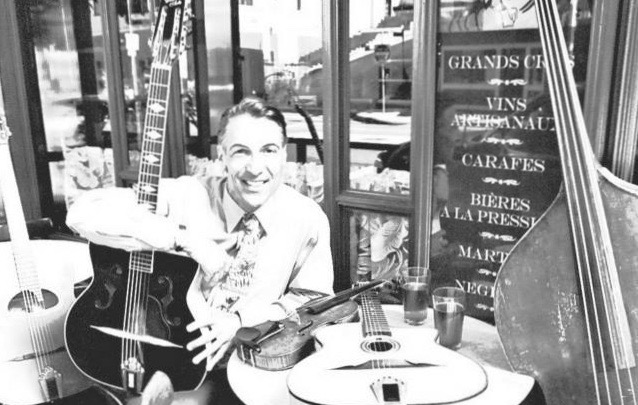 Paul Mehling, founder and lead guitarist for The Hot Club of San Francisco.

It’s the music of mystery. Guitars brought it to life over campfires outside Paris, then innovators gave its pulse a touch of the California countryside. These days, Roma-inspired jazz is a kind of love letter to Mediterranean climates. It’s the sound of cars rambling along rustic vineyard roads. It’s a glimpse of strangers wandering ocean cliffsides in the sun. The style was invented by a smoking, suit-clad, mid-century outcast, and its growing popularity is a testament to how he used a sense of otherness to capture all that’s quintessentially romantic.

That man was the Django Reinhardt.

Reinhardt’s tunes continue to propel some standout bands touring the world; and one of the most-renowned of those is The Hot Club of San Francisco. On Dec. 3, it will take the stage at The Sofia Theatre in Sacramento, its’ players proving why their mastery of Reinhardt’s arrangements has left Roma-jazz fans cheering from Brazil to Honk Kong.

The man who started this peculiar sub-genre was born in 1910 and grew up in Roma caravans that moved around Belgium and the outskirts of France’s capitol. Growing up, Reinhardt proved a guitar virtuoso as he sat in tiny, crowded Parisian cafes. But his career was almost finished when an errant candle lit the wood covered-wagon he lived in ablaze. Reinhardt’s left hand was severely mutilated.

He battled through the pain, ultimately creating an approach to playing that only uses three fingers on the fret board. This simple breakthrough allowed him to fuse the soul of his Roma experience with America’s rising rhythms of jazz. That confluence can be heard in songs like “Limehouse Blues” and “Minor Swing,” which seem haunted by an excited speed of roving through life in the Old World, other times brimming with a lazily, graceful energy Reinhardt threw in his soothing arpeggios. As a composer, his achievements like “My Serenade” invoke the hesitant exuberance of strolling through a European city at dusk, conjuring busy images of the West Bank at sundown, or walking through the rain under the hazy lights of Paris.

And then there are pieces like “When Day is Done,” with its opening barrage of haphazard chords shepherded by the exotic, ringing dance of Reinhardt’s delicate solos. Its notes seem to harken back to Reinhardt’s lonely, exiled childhood. It’s a song where his bending strings are filled with the operatic voices of men destined for paupers’ graves – a sound that gently cries with the longing lament of the refugee.

When Reinhardt died at the age of 43, he’d given birth to a cult following for Roma guitar that endures to this day.

Despite the pathfinder’s massive appeal in Europe, he fell into a level of obscurity across the Atlantic. Around 1970, a 9-year-old guitar picker in Silicon Valley was searching through his father’s record collection, trying to cope with his musical heartache over The Beatles breaking up. Paul Mehling hoped to excavate some kind of foreign sound that would stir his senses – perhaps pick his spirit up the way the Fab Four had with albums like “A Hard Day’s Night.” Given that Mehling was obsessed with Rock and Roll, his dad’s stacks of 78s might have seemed an odd place to be looking.

“His tastes were very specific to traditional Jazz – I mean, no Bebop, and I don’t think he wanted to listen to anything that came after WWII,” Mehling said with a chuckle. “But he did have some rare, imported Jazz albums, and a few of them were by Django Reinhardt.”

The more Mehling listened, the more he heard surprising parallels between these odd café culture riffs and his own generation’s Rock. In Reinhardt’s approach, the rhythm and lead guitars were always acoustic, but they brought an exuberant energy to their fusions – and a daring bravado that still had poignant pearls and undercurrents of melancholy.

Mehling felt a genuine urge to share his discovery with others.

“The music is just really accessible,” he said. “It has the heat and the showmanship, but it’s also charming, romantic and sentimental. When the rhythm guitar and violin are playing together, it’s a very specific sound in the universe, and you don’t hear it anywhere else.”

The band has consistently released albums ever since. Its records are usually an eclectic stack of covers with a few originals written by Mehling, who feels it’s important that the Hot Club isn’t just mastering a tradition, it is also contributing to it. That ethos comes through on the group’s composition “Don’t Panic.” Mehling opens it with those slow echoes of Iberian emptiness, before violinist Evan Price starts slashing along with him through the wheat fields of acoustic adventure. Then the rhythm section comes on with a hoofing-it kind of intensity, Hunter Matthews and Jordan Samuels pushing the momentum until everyone is running with a frenetic bandit’s bluster.

While “Don’t Panic” shows the sweeping kind of fun Mehling and company can muster through their writing, the Hot Club’s fan appeal is equally fueled by its Django-fied takes on old standards and timeless hits. A particular gem is its cover of The Beatles’ mid-career ballad, “Michelle.” It starts with a tapping, half-tangoing bit of introspection before whirling into a dazed meditation under the cypress trees. The rhythm players take their languid stroll down the sonic stones of Rome or Athens, all while sharing a melody that’s both strange and familiar.

“Michelle” was part of an entire album of Beatles songs The Hot Club of San Francisco released in 2016. They called the collection “John, Paul, George and Django.” For Mehling, it brought his link to Reinhardt full-circle.

“It’s been one of our most-popular albums,” he acknowledged. “Something about it just really resonated with people.”

The Hot Club of San Francisco’s Dec. 3 show is part of an ambitious line-up that The Sofia has been mustering in recent months to re-start Sacramento’s quality of life, post-pandemic. It’s included stellar shows like Mania! The Live Beatles Experience, HBO’s violin dynamo Lucia Micarelli and the New Orleans brass band-Mardi Gras Indian combo Cha Wa. All of those shows were produced by SBL Entertainment, one of four presenters The Sofia is working with at the moment. The Hot Club of San Francisco’s appearance marks SBL’s latest show.

“The presenters we work with have varying tastes, but they all clearly bring high-caliber talent,” said Jerry Montoya, executive producer for The Sofia. “When you look at everyone SBL brings through, it’s actually hard to explain just what quality acts these are. The Hot Club of San Francisco, for example, isn’t the kind of act you can get to play just anywhere in Sacramento.”

Mehling said the Hot Club, which played once at The Sofia when it first opened, is looking forward to its big night in Sacramento.

“The Sofia is a great venue with really good acoustics and excellent lines of sight; and it’s honestly everything we want in a venue,” the guitarist stressed. “Lately, audiences are so grateful to be able to experience live music again, and we’re so grateful to be performing for them – and fortunately people are saying that we’re not showing any signs of rust.”

Be the first to comment on "Vagabond virtuosity: The Sofia prepares for one hot night with The Hot Club of San Francisco"